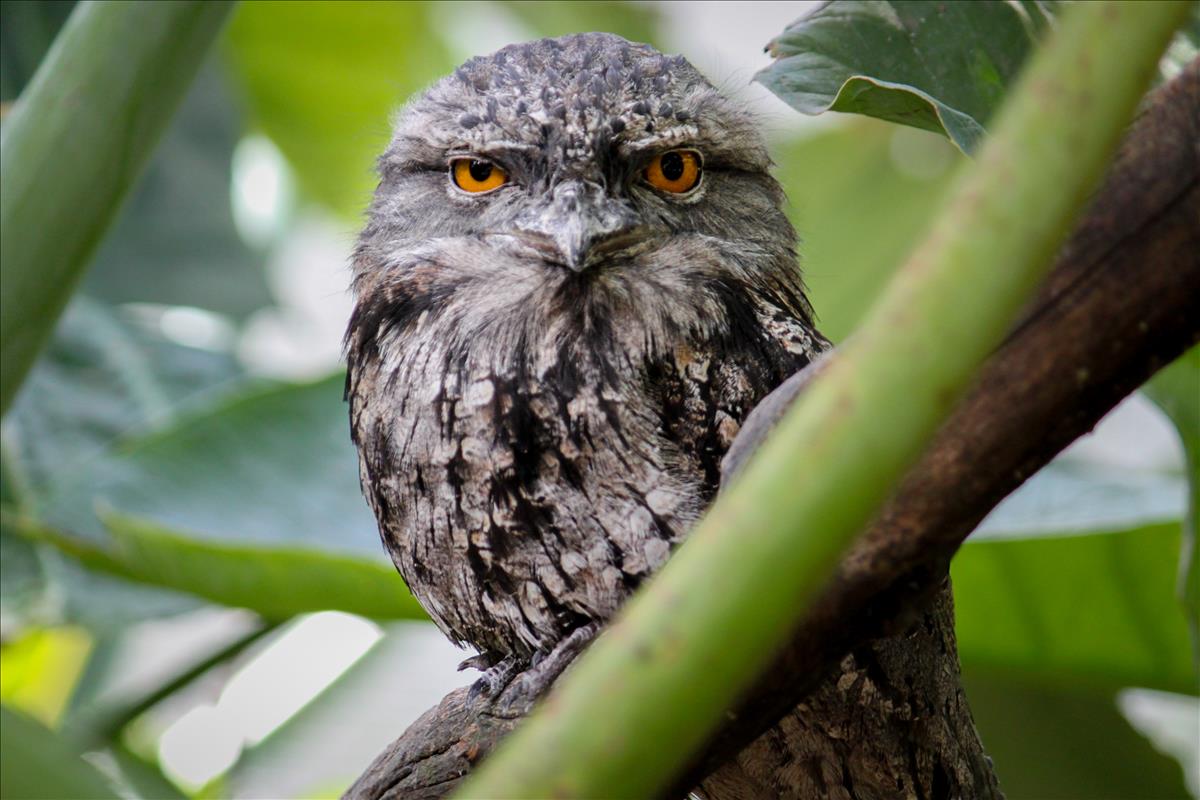 The tawny frogmouth is silver-grey, streaked and mottled with black and rusty-red. It is sometimes mistaken for an owl, but frogmouths are more closely related to nightjars. The feathers are dark gray along the back and wings. The colour fades as the feathers approach the under parts of the tawny frogmouth. They have lime-green or yellow colouring in the mouth/throat.

Plumage and size vary geographically. There is no apparent difference between the plumages of the sexes; colouring varies for both sexes from grayish-brown to rufous brown. The only way to distinguish between male and female is by the iris of the eyes. The females’ eyes are large and round with a yellow iris and black pupil. The male has a ring of orange-brown surrounding the iris. The beak is brownish and very wide with the upper mandible strongly hooked. There are tufts of bristles directed forward above the beak and also at the nape. The head is softly feathered and when the bird is alert, the feathers are slightly raised.

Found throughout most of mainland Australia and Tasmania.

Widely distributed in all types of wooded areas, but they prefer large, spreading trees. They are absent in the denser parts of the rainforests.

The voice is a repetitious low, oom-oom-oom, heard at night and kept up for long periods during the breeding season. They are monogamous; pairs stay together until one of the pair dies. They breed from August to December.

The nest is a flimsy platform of sticks across a horizontal fork of a branch, up to thirteen meters above the ground. They also build nests in vertical tree forks. Usually they use the same nest each year, and must make repairs to their loosely built nests. Sometimes they take over old nests abandoned by other birds. The female lays two or three glossy white, oval eggs onto a lining of green leaves in the nest. Both male and female take turns sitting on the eggs to incubate them until they hatch about 30 days later. When first hatched, the young are covered with long, creamy-white down. Both parents help feed the chicks. About 25 days after hatching, the chicks are ready to leave the nest.

The frogmouth is a nocturnal hunter, with soft plumage and silent flight. It has simple toes, adapted for perching only and captures most of its food on the ground, pouncing on it from a low branch, or other vantage point; using its wide beak. It usually rests motionless during the day, perched on a low branch, often with head hunched and feathers loosely raised. The eyes may appear closed, but as the upper eyelids are only lowered half way, the bird is still alert and observant. At first hint of danger, it stretches its neck and body with feathers tightened and beak pointing upwards. Frozen in this position, its cryptic colouration is perfect camouflage and the bird is indistinguishable from a broken stump.

The main enemy is the carpet python. The snake detects the bird by physical and chemical stimuli, rather than by sight, coils around it and swallows it whole.