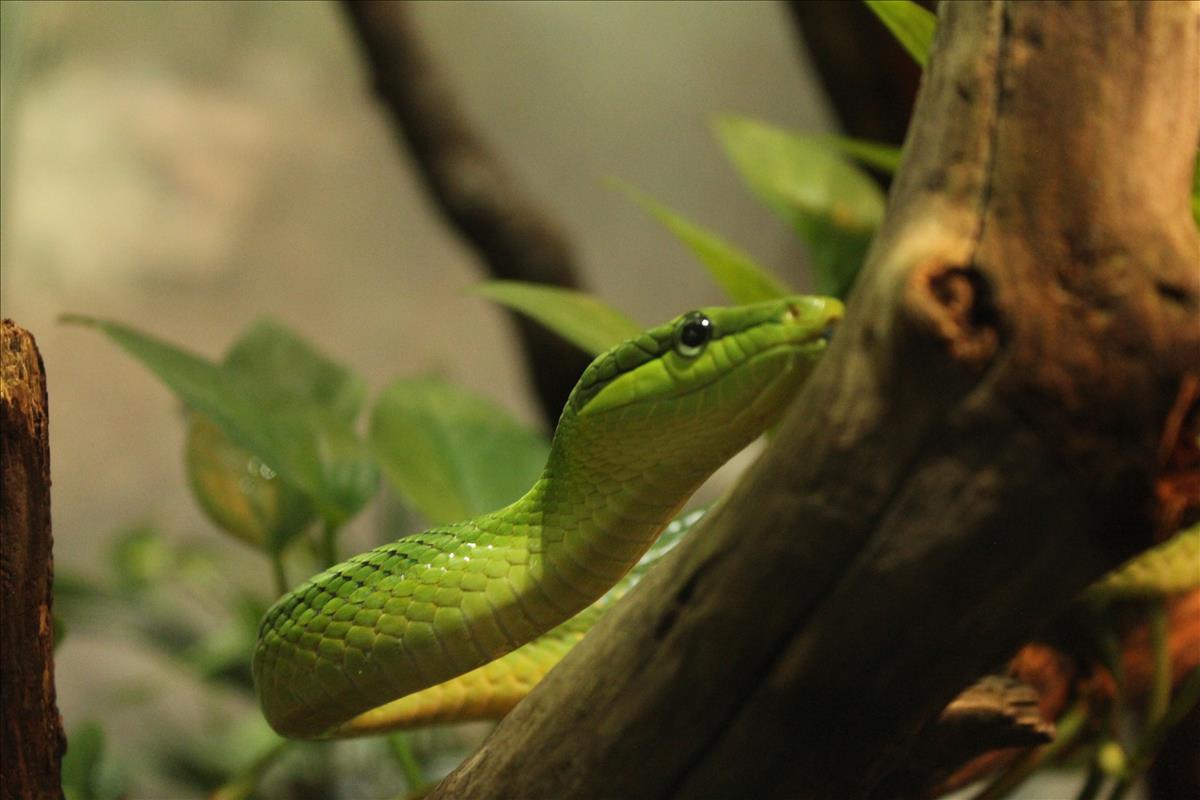 These are long, slender snakes. Adults are bright green. The tail can be reddish-brown, orange, or gray. They have very smooth scales, and the head is covered by large, plate-like scales. Their eyes have round pupils. Juveniles have black spots, which usually fade as the snake ages. Occasionally, they may keep their spots through adulthood. Females are slightly larger than males. Adults are green dorsally and yellow-green ventrally with a red or orange-red tail. The body scales are black edged which may be noticeable. The longish head is flattened laterally with a thin dark stripe through the eyes, which separates the green colour on the top from the lighter green below. The tongue is blue-black.

They feed mostly on birds, and their eggs and nestlings. They also eat frogs, lizards and small mammals. They are non-venomous snakes. They kill their prey by constriction, squeezing tightly to suffocate the prey.

In their tropical environments these snakes breed year-round. Females can produce three to four clutches in one year. Clutch size is five to twelve eggs and eggs hatch in 65 to 70 days. Juveniles are about 45 cm long when they hatch. The young vary from an olive brown colour, with narrow oblique white bars to green, like their parents. Adult length varies with location. Snakes from the mainland seem to get bigger than those from island populations. They usually live about six years, and captive individuals have lived up to 15 years.

Colour is an example of countershading; the green on the back blends in with the lush foliage while the yellowish green on the underside matches the leaf-filtered light. Evolutionarily they have evolved to look and behave like a venomous pit viper which occupies the same habitat (mimicry). In cross-section the snake has a triangular shape with the broader belly providing increased surface contact as it climbs through branches. The angled shape of the back allows for easy movement amid branches and leaves. The ventral scales are slightly notched and keeled to aid climbing. They are diurnal and primarily arboreal. Since they are active arboreal and terrestrial hunters, chemosensory and visual cues are important in the foraging phase. Prey is constricted before ingestion while the tail is anchored around a branch. Resting in trees coiled with their heads in the centre keeps them prepared to strike at prey. While most adults have green colouring that makes them almost invisible in the treetops, there is also a gray or reddish form. Found most often in Indonesia, these dark-colored rat snakes do most of their foraging on the ground, where they are better camouflaged.

In the past there was a large market for these snakes and snake products; e.g. skins, blood and certain other parts for medicinal uses. Now the Thailand Government restricts the export of leather and the number of Gonyosoma oxycephala for export. Since they are recognized for their role in rodent control, by the local people, they are left alone.