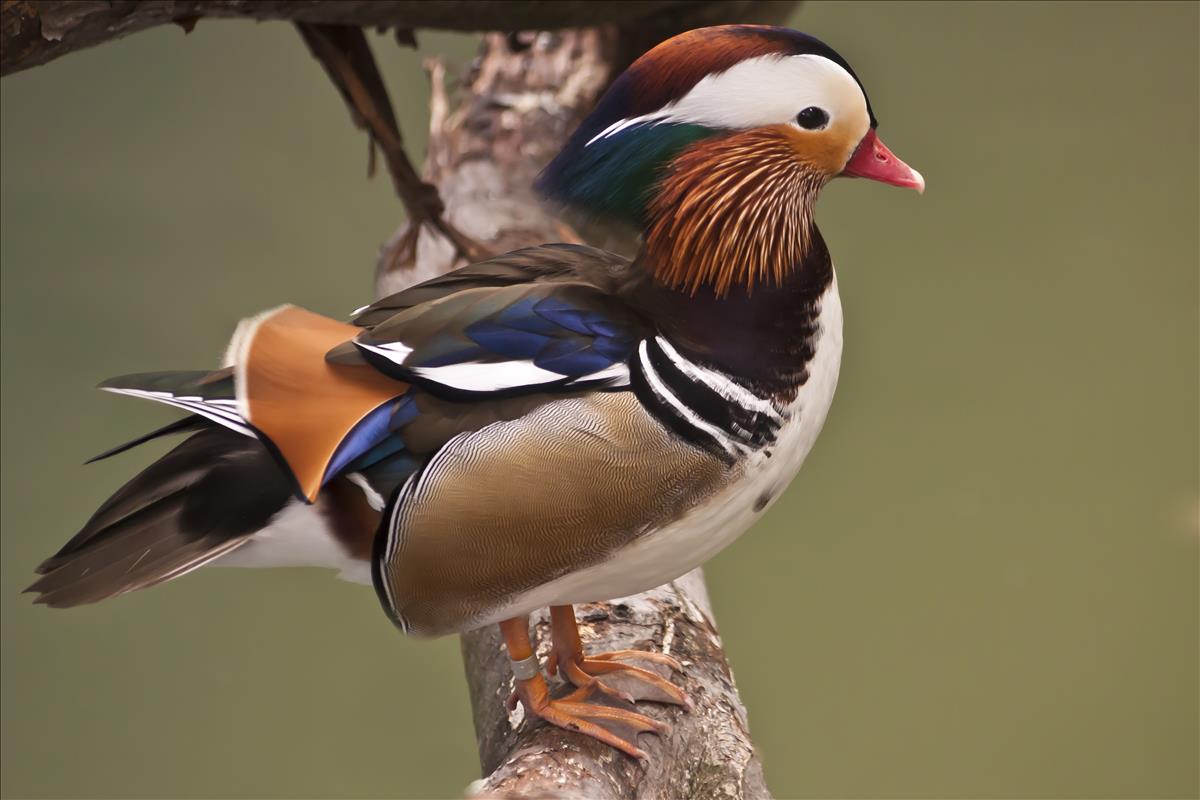 The male mandarin duck is a very striking bird. In full plumage, the male has a pair of orange “sail” feathers that are raised vertically above the back; it has a red bill, large white crescents above the eyes, and a reddish face with “whiskers”. The breast is purple with two vertical white bars; the flanks are ruddy. The female has a pinkish bill and is considerably less colourful than the male. They have a white eye ring with a stripe running to the back of the head. They are pale beige with a narrow white flank stripe and white under body. Juveniles resemble the female. In flight, both sexes display a bluish-green iridescent speculum.
Mass: 428 to 693 g.
Wing span: 65 to 75 cm.

In the Far East, mandarins are migratory. They occupy eastern Siberia, northeastern China, South Korea, and Japan. Some birds winter in southeastern China and Taiwan. They were successfully introduced into south England; about 1000 pairs remain. Wild birds have occurred in northeast India and Hong Kong as well as escapees from breeding farms throughout Europe and North America.

Seeds, especially the seeds of water lilies, nuts and acorns, aquatic plants, and animal foods such as snails, insects, and small fish. Mandarins feed by dabbling or walking on land. They feed mainly near dawn or dusk, perching in trees or on the ground during the day.

Their courtship display is very impressive and includes mock-drinking and shaking. Pairs are formed at the beginning of the breeding season and may continue for several seasons. Breeding usually starts in April. Although the female chooses the exact nesting site, the male accompanies her on nest searches. Nests are always in a hole in a tree. Tree hollows can be up to 10 metres from the ground. In preparation for egg laying, the female lines the nest with down. She lays nine to twelve white oval eggs. Incubation is by the female, lasting from 28 to 30 days. The eggs hatch within a few hours of each other. The chicks are olive-coloured on top and yellowish below. The mother calls to the chicks from the ground. Each chick then crawls out of the hole and launches itself into a free fall to the ground. Amazingly, all the chicks land unhurt and are now en route to the nearest feeding ground. Fledging occurs after 40 to 45 days. Once they can fly they leave to join a new flock. They are sexually mature after one year.

They perch regularly high in trees. Nest holes are not only high but can be quite deep. The ducklings are able to scramble to the entrance of the nesting hollow soon after they hatch.

They forage by dabbling, dipping their head in the water and upending in shallow waters. They occasionally dive as well as swim.

Formerly abundant, numbers of mandarin ducks in their native Far East have declined due to habitat destruction (mainly logging) and over-hunting. The majority of the Asian population now resides in Japan. This species breeds readily in captivity.