Jump to a Section 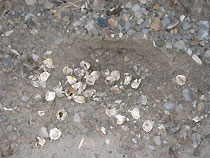 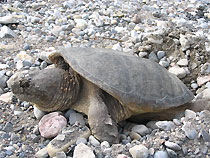 
Moisture
The porous shelled eggs of many North American turtles exchange water with the environment inside their nests. Eggs in nests within moist soils consequently absorb water over the course of incubation, while eggs within drier soils typically lose water. The availability of water during incubation influences incubation time, hatchling size, locomotion speed and body composition. Embryos with access to more water (in relatively moist nest areas) will consume more of their residual yolk, have a longer incubation time, greater body size at hatching, increased locomotive performance and greater body hydration. Larger hatchlings may have a superior ability to avoid predation, but smaller hatchlings possess a larger reserve of energy in the form of residual yolk that could help support them over winter. While smaller turtles may have more energy reserves to draw from while overwintering, they do not have the potential to grow rapidly and overtake larger conspecifics. 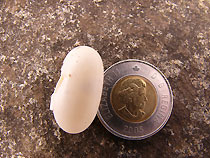 
Canopy cover
Canopy cover around turtle nests is negatively correlated with nest temperature, so that nests with more vegetative cover experience cooler temperatures. Nest temperatures in turn affect incubation success, hatchling sex and other characteristics (See above). One known cause of developmental failure is the selection of nest sites with reduced or absent solarization (closed canopy) that result in low temperatures. Sites with more shade, and lower temperatures, could prolong development to an extent that embryos would fail to hatch before fall freeze. Typically, nests are found in predominantly open, exposed sites with minimal vegetative cover. These exposed sites have increased nest success compared to those with more cover. However, nearby grasses and ground cover increase the probability of hatchling survival. 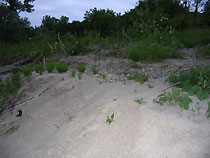 
The following characteristics of preferred nesting sites should be considered when constructing artificial nests: Substrate is likely one of the most influential characteristics in turtle nesting. Along with site location, substrate influences both nest moisture and temperature. Turtles and their eggs have a range of temperature and moisture tolerance, outside which they experience abnormalities or mortality. Their nests require a balance between a substrate that is too wet and a substrate that is too dry. Eggs that sit in water or saturated substrate will drown or develop mold. However, substrates that are too dry will not supply the eggs with enough water. The substrate must also allow air circulation and be loose enough for the female to dig the nest and for hatchlings to dig their way out. While turtles seem to prefer nesting sites with moist, well-drained soils, they may select sites with different substrates depending on climatic conditions of the year. It is important to provide variation in your nesting sites and offer nesting turtles many options. Try different substrates, mixtures of substrates and different locations. We know that turtles have opportunistically nested in substrates created for other purposes such ploughed farm fields, lawns and flower beds to coal slag, piles of sand, woodchips and roadside shoulders! Constructing more than one nesting area is important in your design as they will provide micro-climate variation, reduce the likelihood that vegetation will cover the site and reduce predator saturation of nesting sites.

The type and size of the substrate particles will affect air space, temperature and moisture level. For soil, there are three size fractions: sand, silt and clay. Loam is some combination of all three.

Often turtles are attracted to the warmth of compost,
similar to this woodchip-type substrate

* A sample of known weight is passed through a set of sieves of known
mesh sizes. The sieves are arranged in decreasing mesh diameters. The
sieves are vibrated for a period of time and the particles sort through the sieves.
The amount of substrate retained on each sieve is measured and converted into a percentage of the total sample.


While open, exposed sites are preferred, some low ground vegetation may to help decrease predation of hatchlings. However, you will have to keep the vegetation from becoming too dense or too close to the nest site - active vegetation maintenance may be necessary. Landscape filter cloth, buried well below nesting depth (12") can be placed to prevent vegetation from establishing at the nest site. The presence of vegetation will also help stabilize substrates and provide erosion control. In natural systems, floods and erosion provide an ongoing supply of exposed soils available across the landscape as older, or more stable, sites become more vegetated.

It may be necessary to protect nests with a wire predator exclosures that cover the nest and extend into the ground around the nesting area. Wire mesh must be large enough (2" x 3") to a low hatchlings to pass though after they emerge from the ground. If necessary, predator guards may be removed 14 days fter egg laying as most nest predation occurs in the week After egg laying.

Unfortunately, there is not a lot of detailed scientific data on the specifics of turtle nesting sites. It is suggested that you provide variation in your nesting sites and offer nesting turtles a mosaic of options. If you don't know where to start, use data loggers and collect information (temperature, moisture, canopy cover, soil properties) of known nesting sites and try to replicate them.

Implement a monitoring program. Note where turtles are nesting (and where they are not nesting) and collect as much information about these sites as possible. Collect soil samples and analyze them for moisture content, texture (water potential) and other properties. For nest sites, monitor nest temperature, moisture, hatchling success and predation rate. Gathering and sharing this information will help to identify common preferred nest site characteristics

The cost of implementing an artificial turtle nest project will vary according to the project design. Materials (i.e., substrate, vegetation, filter cloth), equipment (i.e., backhoe, temperature/moisture analysis) and manpower should be factored into your budget.


From time to time, eggs must be moved due to: Important notes about nest relocation and moving eggs: Most Ontario turtle eggs will hatch in 60-90 days, although painted turtles often hatch and overwinter in their nest, emerging the following spring.

Gutzke, W.H.N. and G.C. Packard. 1987. The influence of temperature on eggs and hatchlings of Blanding's turtles, Emydoidea blandingii. Journal of herpetology 21(2): 161-163.

Rhen, T. and J.W. Lang. 1995. Phenotypic plasticity for growth in the common snapping turtle: Effects of incubation temperature, clutch, and their interaction. The American Naturalist 146(5): 726-747.