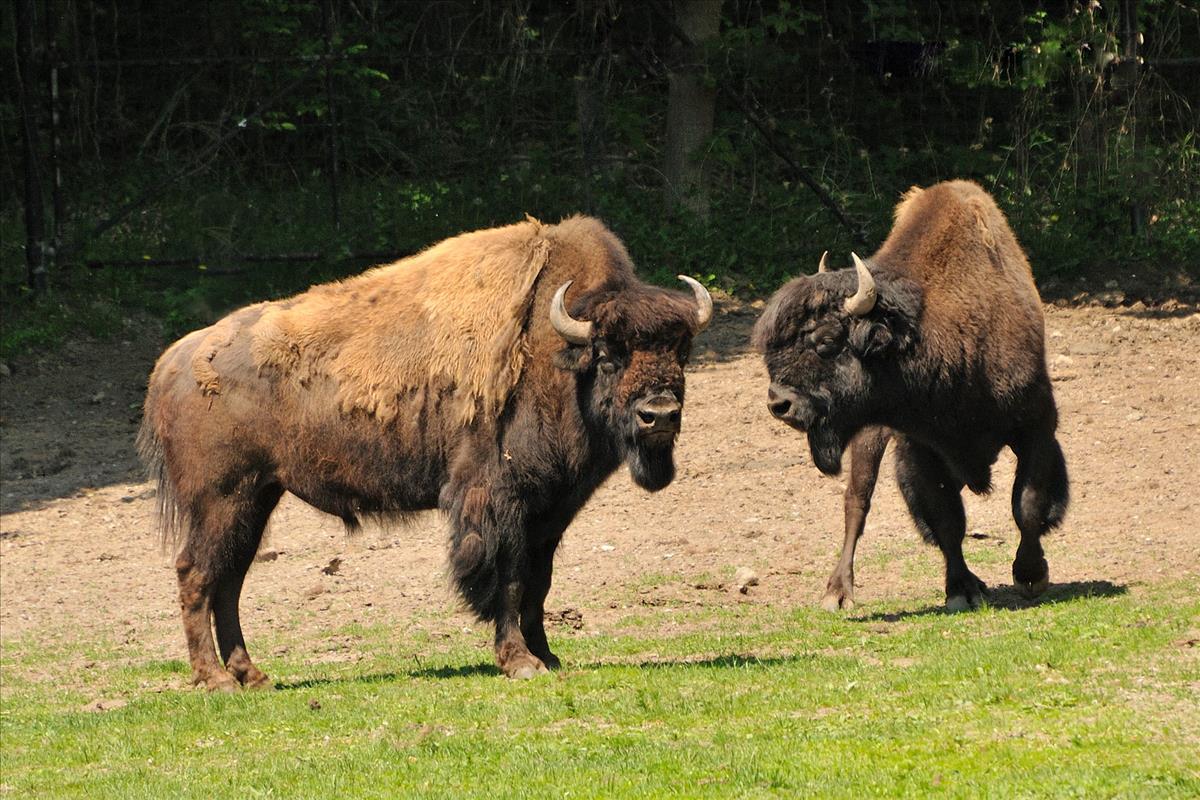 Often incorrectly referred to as buffalo, bison are easily recognized by their massive forequarters and their large shoulder hump. The name bison is the Greek word for “ox-like animal”. Compared to the more plentiful plains bison, wood bison are somewhat larger, darker in colour, with a more pronounced shoulder hump and shorter hair on the neck and forelegs. They are also longer-legged and taller. Both sexes have a large, woolly, bearded head with black, curved horns set on a short neck. The hindquarters are somewhat smaller and they have a distinctive tasseled tail. Their thick coats vary in colour from golden to dark brown; the long bushy mane covering the head, shoulders and forelegs contrasts with the lighter coloured hindquarters. For the first three months of life, young bison are a reddish brown. There is sexual dimorphism; males are larger and heavier than females. Males have a body length of 3 3.04 - 3.8m and a height of 1.67 - 1.82m (at the shoulder. Weight ranges from 350 to 1,000 kg.

The current range of the Wood Bison is centered on the borders of the Northwest Territories, Alaska, northern Alberta (notably at Elk Island), northeastern British Columbia, northwestern Saskatchewan and the Yukon. The largest herds are in Wood Buffalo National Park and the Mackenzie Bison Sanctuary, south and west of Great Slave Lake. Free ranging herds also occur in some territories.

Boreal forests, scrub-land, meadows along riverbanks and muskeg swamps. In spring and summer, wood bison forage in drier, grassy meadows, shrubby savannahs and parklands. In winter they can be found in wet meadows and intermittently in lake areas, when frozen.

Sedges and grasses make up 85 percent of their diet; herbs, lichen some shrubs and willow leaves account for the remaining 15 percent.

For most of the year, bison form herds of adult females, sub-adults and calves; separated from mature bulls. As a rule, mature cows and bulls only mix during the rutting (breeding) season from July to early September. Bison are polygamous i.e. they breed with more than one female. During the breeding season, dominant bulls maintain and guard a small harem of females until ready to breed. “Bull roaring” challenges can be heard for miles around, day and night. Males raise tails, arch backs, paw the ground and snort before actually engaging in a pushing match with rivals. Sometimes these matches result in serious injury. If the challenged male does not wish to fight, it will walk away from the challenger.

Calves, usually one, are born in May after a gestation period of approximately 277-293 days. The cow leaves the herd, gives birth, and rejoins the herd with the calf as soon as it is able to run, which is in about three hours. Calves gain strength rapidly and are able to run with the herd by autumn. The ones that are born earlier in the season tend to grow larger and become more dominant as adults. They nurse for up to one year and remain with the mother for three, at which time they are sexually mature. Full maturity is at about three years for females and six years for males.

Bison are well adapted to the cold northern climate. Their metabolic rate decreases in colder temperatures hence less food is required to sustain the animal. Unlike most hoofed animals that use their feet to paw through snow when foraging, bison clear snow from vegetation with a sweep of their head and neck. This action is made possible by long spines on their vertebrae (the back hump) which support strong ligaments linked to the neck and shoulder muscles. Bison eat in the morning and evening and rest during the day. They shed their thick hair in early summer. During the time it takes to grow back (which coincides with the peak of the biting insect season), they wallow in shallow depressions in the soil, wet or dry, to coat their skin which protects them from these insects and other parasites such as ticks and lice. Wood bison are alert and suspicious and the mere snapping of a twig will cause them to leave the area.

The wood bison or bison in general have made a comeback in North America after having been once virtually extirpated through relentless hunting for their skin and other body parts as well as destruction of their habitat. By the 1900’s only a couple of hundred wood bison still existed and were considered to be extremely rare. Through careful and diligent conservation by various governments, this small herd has grown to approximately 3000 free-range animals with many thousands more in protected environments such as National Parks and captive bred herds. Although the wood bison are no longer in immediate threat of extinction, diseases such as brucellosis and tuberculosis remain the greatest single obstacle to the complete recovery of the population.