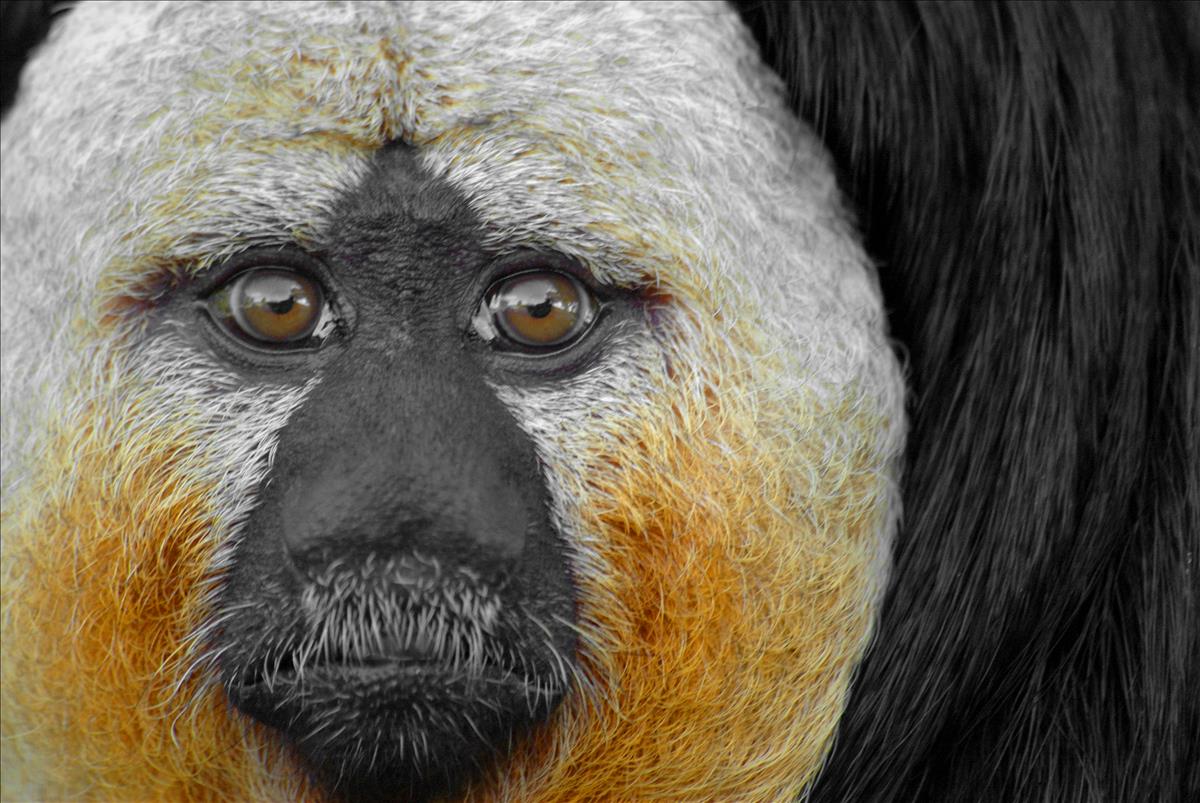 This species is sexually dimorphic in terms of pelage. Males and females clearly look very different in colour. Males have black fur except for the face, the throat and the top of the head which are white to reddish. Females, on the other hand, are brown to brownish-grey above and paler below with white to pale red-brown stripes going down from each eye to the corners of the mouth. The face is flat with a broad nose. The tail, which is long and thick, is not prehensile. There is a gap between the canines and the pre-molars.

Undisturbed rainforest, secondary, ridge, savanna, and marsh forests.
The white-faced saki usually inhabits the lower to middle canopy levels of forest. They are active during the day and will spend most of their time in the trees, only rarely coming down to the ground.

Primarily frugivorous (fruit eaters), but seeds and nuts constitute a part of their diet as well. This species also consumes leaves and insects, especially ants making them somewhat omnivorous. They also eat termites, which are high in iron content. Small mammals such as mice, bats, and small birds are also occasionally consumed. Geophagy (the consumption of soil and minerals), has been reported for this species, most likely to supplement important minerals.

They live in small family groups, consisting of the parents and two or three offspring. A single youngster is born after a gestation of about 170 days and clings to the mother for the first couple of weeks. At first, the mother alone takes care of her baby. Later the male or one of its siblings may also carry it. Male and female infants are born the same colour as the female. Males begin to show adult colouration at two months of age and the colour is well developed at three months. The babies grow quickly, becoming quite independent by the age of four to six months, but usually stay with the family until they are one year of age. Sexual maturity occurs at four years of age. In the wild sakis have a life expectancy of approximately 14 years.

White-faced sakis are almost completely arboreal, eating and sleeping in the trees. They are extremely acrobatic and move through the forest both quadrupedally and by leaping. They can hop bi-pedally along branches, using the tail as a balance. When the white-faced saki takes off from a tree branch, it can do so in a vertical-clinging position. When resting, this species most often clings vertically to a tree trunk. Occasionally, they will descend to the ground to search for food. They mostly use all four limbs to walk, climb or leap but sometimes they will hop on their back two legs and this has earned them the nickname ‘flying jacks’ in Guyana.

Communication: They use visual, olfactory, tactile, and vocal signals to communicate. The white faced saki has loud territorial calls. Duetting between the male and female is important in maintaining territorial boundaries as well as the social bond between monogamous pairs. They often mate for life and males and females will strengthen the bond by grooming each other. The male will also groom his young. When required, an aggressive display starts with a body shake, an arched posture and a growl; then they will use their whole body to shake a branch. They have distinctive escape habits: alternating between fleeing rapidly and freezing which confuses the pursuing predator.

Lifestyle: Sakis are able to satisfy their needs within a small range. They are diurnal, with a very quiet and gentle disposition. They are sometimes solitary. On occasion however, individual family units band together to form larger social groups.

Dentition: They have robust incisors and canines, used to break through the tough outer layer of fruit, and to crack hard nuts.

Their natural enemies are small cats, tree dwelling snakes and birds of prey. Habitat destruction is an ongoing threat. Additional threats include being hunted for meat, their luxurious tails and live collection for the pet trade.