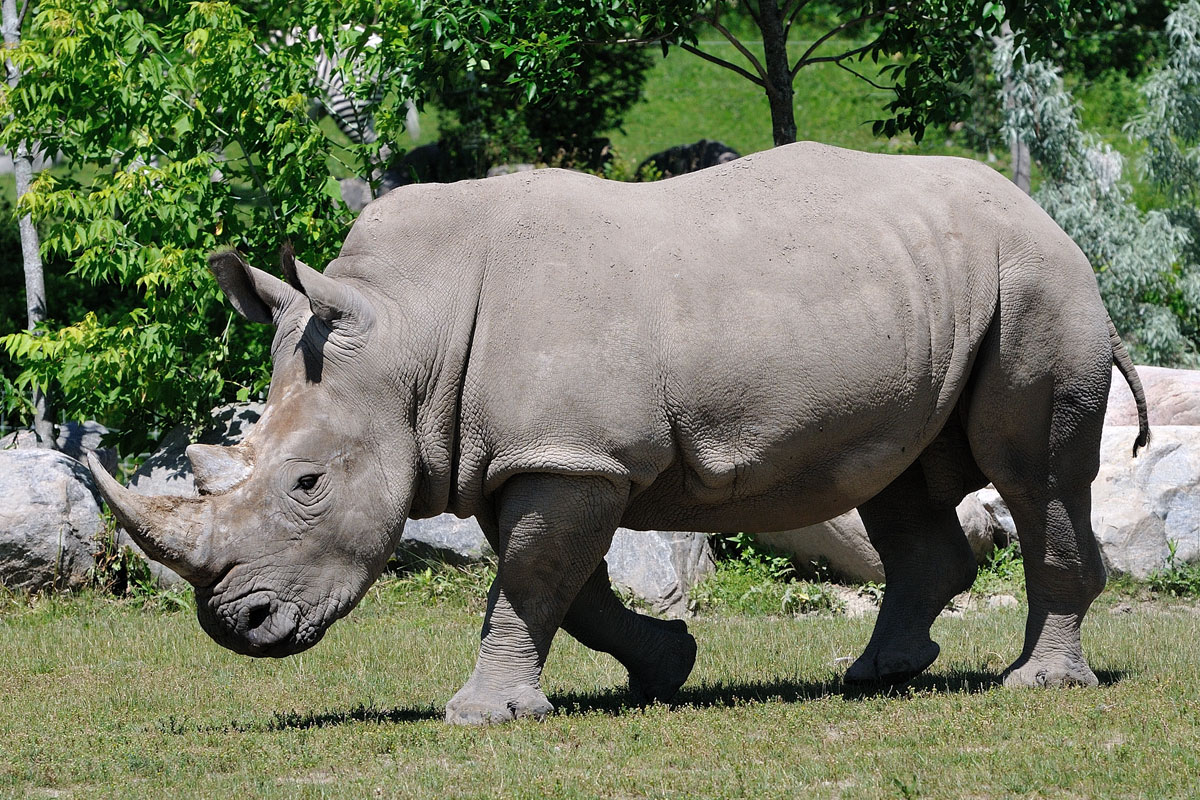 The white rhino is the largest living land animal after the elephant (giraffes are taller but weigh less). They have massive bodies, short necks, and broad chests. Males are slightly heavier. They have a noticeable muscular hump on the back of the neck which supports the large head. The head is very long and carried low to the ground. They have two medial horns on the snout, one behind the other, the front horn being longer. The name white rhino is derived from the Afrikaan word "wyt" meaning wide, referring to the broad square upper-lipped mouth that distinguishes it from the black rhino. The white rhino has no front teeth (incisors); cheek teeth are high, broad, and strongly serrated. The ears are long, and they pivot freely. Colouration is a slate gray or yellowish-brown (not white). They have very little hair except for ear fringes, eyelashes, and tail bristles with a few hairs intermittently scattered on the body. Short thick legs end on broad three-toed feet. These toes are quite well defined.

Two subspecies of white rhinoceros are recognized, the northern and the southern. South Africa remains the stronghold for the southern species, Ceratotherium simum simum. In the early 20th century, white rhinos were almost at the edge of extinction, but, after years of protection and many translocations, they have made a substantial comeback. Sizeable populations are found in various national parks, state protected areas, and private reserves. There are smaller, reintroduced populations within its former range in Botswana, Namibia, Swaziland, and Zimbabwe. A small population survives in Mozambique. They have been introduced outside of their former range to Kenya, Uganda, and Zambia.

The northern species, Ceratotherium simum cottoni, has not faired nearly as well. Their numbers have declined drastically. In the past few years only four have been sighted in the Garamba National Park in the Democratic Republic of Congo. They have not been seen recently and this subspecies may have become extinct in the wild.

They occupy grassland and savanna habitats as well as brushy woodland interspersed with grassy openings.

Herbivore; white rhinos are grazers, feeding entirely on grasses that they crop with their wide front lip. Their short legs, long head reaching almost to the ground, and wide mouth are used in combination with a side to side head movement to eat massive quantities of grass. It drinks twice a day if water is available, but if conditions are dry it can live four or five days without water. It spends about half of the day eating.

The white rhino has a complex social structure. Females and young associate in groups, while adult males are territorial and essentially solitary. Territorial bulls mark and patrol the boundaries of their areas and challenge any intruding adult males. Boundaries of individual territories often overlap. A dominant male usually tolerates the presence of several subordinate males within his territory and also allows females to wander freely through the area. Breeding occurs throughout the year. Before mating, bulls may fight over females in estrous. A form of courtship ensues, and courtship itself is often fierce. During courtship, the pair often chase, clash horns, and vocalize with each other. The male will give out a call when approaching a female, but if she acts aggressively he will stay away. If the female tries to leave his territory he will chase and/or block the way while squealing or wailing loudly. The female curls her tail and gets into a stiff stance when ready to mate. Copulation lasts about a half hour. Breeding pairs will stay together for between 5 and 20 days before they part and go their separate ways. A single calf is born after a gestation period of 16 months. Twins have been recorded, but are rare. Newborn calves are on their feet in just a few hours after birth, but are unsteady for their first 2 to 3 days of life. They suckle at any opportunity, and though they begin eating greens when they are only one week old, they will continue to nurse for over 12 months. Calves generally lead their mothers and determine the direction of travel. Rhino mothers are very protective of their calves and will fight vigorously for them. During any such confrontations the calf will stand behind or to the side of its mother until danger has passed. Young rhinos stay with their mothers for two to three years, leaving only when the mother chases them off before giving birth to the next calf. Females reach sexual maturity at six to seven years of age while males reach sexual maturity between ten and twelve years of age. White rhinos live for approximately 40-50 years.

Rhinos are generally active in the early morning, late afternoon, and evening. During the middle of the day, they wallow or rest in the shade. Like all species of rhinoceros they love wallowing in mud holes to cool down. This is especially important during hot weather for purposes of thermoregulation and for ridding the body of ectoparasites. Rhinos have developed a special relationship with birds such as the oxpecker, egret, and bee-eater, which is referred to as commensalism (both organisms receive some benefit from the relationship). These birds act as sentinels and feed on a wide variety of parasites on the backs of the rhinos.

Communication
They produce about 10 vocalizations, including a panting contact call, grunts, snorts associated with courtship, squeals of distress, and deep bellows or growls for threats, or when threatened. Threat displays (in males mostly) include wiping its horn on the ground and a head-low posture with ears back, combined with snarl threats and shrieking if attacked. The most serious fights break out over mating rights over a female. They create communal dung heaps, which facilitate olfactory identification between animals in an area. Dominant bulls mark their territory with excrement and urine. The dung is laid in well defined piles. It may have 20 to 30 of these piles to alert passing rhinoceroses that it is his territory. They also may scatter their dung after defecation. Another way of marking their territory is by wiping horns on bushes or the ground and scrapes with its feet before urine spraying. This ritual (urine marking), except without spraying, is commonly used. The territorial male will scrape-mark every 30 m or so while patrolling its territorial boundary. Subordinate males do not mark territory. Although vision is relatively poor, senses of hearing and smell are acute. Its ears can move independently to pick up more sounds but it depends most of all on smell. The olfactory passages which are responsible for smell are larger than their entire brain.

Head & Horns
On its snout it has two horns. The front horn is larger than the back horn and averages 90 cm in length and can reach 150 cm. The back horn is much shorter and more triangular. They are located above thick, rough areas of fused nasal bones and grow throughout the life of the rhino. They are usually prevented from growing too long by wear. If broken off regrowth begins immediately. Horns are not attached to the skull and are made of keratin, the same material as human hair and nails.

White rhinos have a distinctive flat broad mouth which is used for grazing. The wide (20cm) upper lip is very flexible. A strip of cartilage inside the broad lips enables it to pluck off grass only an inch or two tall. Ears are long, and pivot freely, which increases their hearing.

Locomotion
White rhinos are quick and agile and can gallop for short spurts at 40km/hr. A high-stepping trot is normally the fastest gait, moving at a pace of 24km/hr, which they can maintain for at least five km.

One of the main threats to the population is illegal hunting for the international trade in rhino horn. This has escalated greatly in recent years especially with the northern rhino. Civil wars have also contributed. Rhino horns have two main uses: traditional use in Chinese medicine, and ornamental use. It is highly prized for making ornamental dagger handles (jambiyas) in Middle Eastern countries. Horn, hide, and flesh are believed to be a powerful aphrodisiac. Adult rhinos have no natural predators other than poachers.