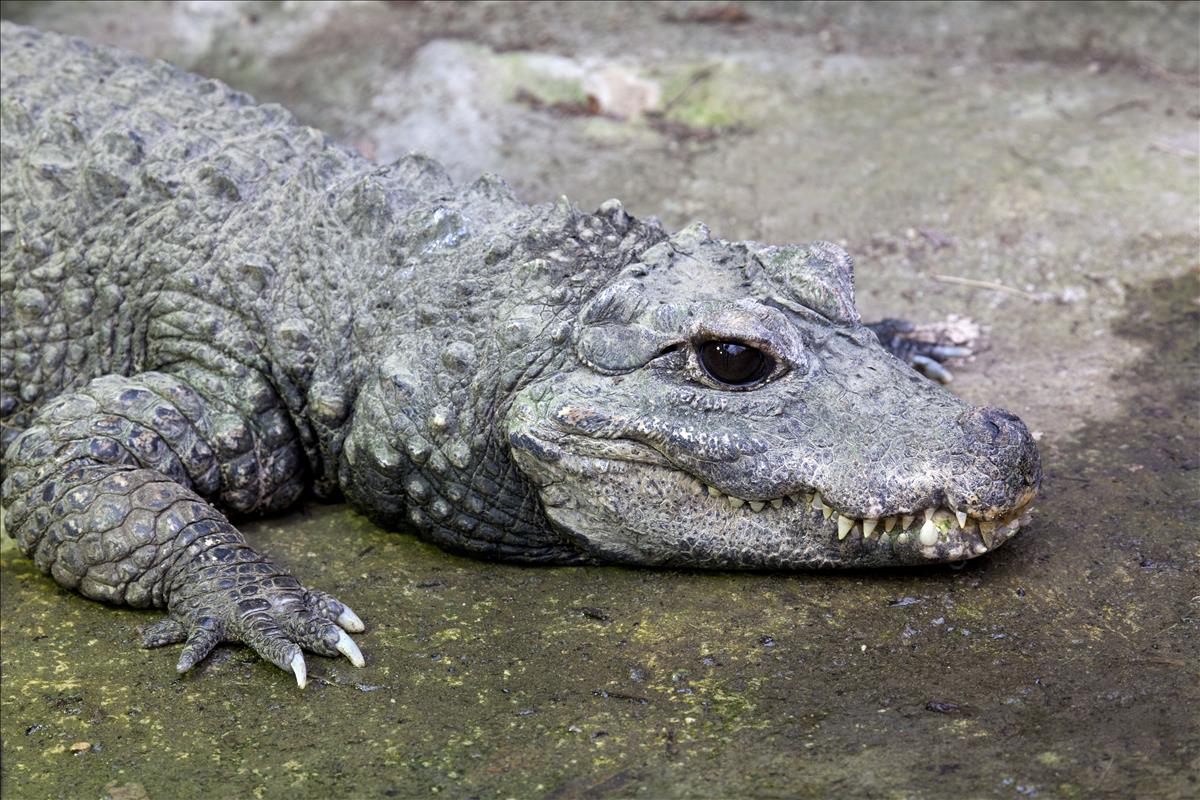 The West African dwarf crocodile, one of the most diminutive of the Crocodilians, reaches approximately two metres in length. Males grow larger then females. It is uniformly black or grayish-black, except the belly and under-tail which are yellowish with irregular, dark splotches. The young are much lighter and varied in colour. They begin to turn black when they become juveniles.

The adult body is covered with heavily armoured scales infused with bony prominences (osteoderms) joined together by tough, pliant tissue. The head is very slightly tapered. Its base is almost the same width as the snout, which is conspicuously short, upturned, and blunt. The nostrils lie on top of this and are crowned with a small, fleshy knob. The mouth when open reveals approx. 64 sharp, conical, rootless teeth inserted into deep sockets. The upper jaw is notched, revealing the large, lower, 4th tooth bilaterally when the mouth is closed. The area in front of the large eyes, situated high on the skull, is smooth. Their pupils, in the daylight, are vertical slits and the iris is light brown. The upper lids are bony and smooth. A clear protective covering (nictitating membrane) can be pulled across the corneal surface when submerged. The ear holes lie behind the eyes and are sealable with bony flaps.

The top of the skull is flat (cranial table) and protected by heavy scales. The neck is likewise covered by ossified shield-shaped scales. The body covering is fortified with scales arranged like tiles. Two, low dorsal ridges run the length of the back in parallel rows until they reach the robust, vertically flattened tail where they become keeled (stand vertically) and continue almost to the tip, then converge into a single row. The limbs are relatively long with clearly developed, clawed, webbed fingers and toes, with five on the front, and four on the rear.

This blunt-nosed dwarf crocodile can be found in the tropical lowland regions of sub-Saharan and west central Africa from the southern tip of Senegal in the north to the Democratic Republic of the Congo in the east and down to a small region of northern Angola in the south.

These reptiles are creatures of the rainforest. They frequent densely vegetated swampy ponds, slow moving rivers and streams, and occasionally savannah pools at the extreme edge of their range. This latter population may be individuals of low status driven from their preferred rainforest ponds by habitat loss and overcrowding.

These solitary and elusive creatures begin to signal their sexual interest at the onset of the wet season when water levels rise and flood swampy pools, filling them with fish and other nutrients. Their hormones also react to changes in temperature, humidity, and light intensity. Crocodilians generally use all of their senses to attract mates as well as becoming increasingly territorial. Occasionally, these crocodiles live in pairs but this is rare.

When mates come together, they lie quietly beside one another in the water, embracing and rubbing their musk-scented throat (gular) glands over each other’s head and snout. She may even lie over his body. Coupling is not lengthy and they separate afterwards. After several weeks of gestation the female seeks out a nest site which may be new or one that she has used before. It is usually in an inconspicuous area, near water but beyond danger of flooding. Here she builds a mound nest of fresh and rotting plant material and into this she deposits and then covers 11-17 porous, leathery-shelled eggs which are kept warm by the heat of decomposition, incubating for approx. 85 - 105 days.

The mother constantly guards the nest from a variety of predators, among them mongoose, monitor lizards, snakes, and ants; she eats little while guarding and listening for the calls made by the emerging young when they have freed themselves using their egg tooth (carnuncle). The female pulls aside the nesting material and carries her hatchlings to the water in her mouth pillowed on her tongue and deposits them in the shallows where they remain together in a family pod under the mother’s protection for some weeks.

The young eat worms, insects, tadpoles, and small fish and grow quickly. While their colouring of reddish-yellow stripes on a black background with yellow body spots is effective camouflage among the light, shadows and vegetation of the pool’s edge, they are very vulnerable to predation from large fish, other crocodiles, birds, and mammals. West African dwarf crocodiles can reproduce when five to six years old but readiness to mate is usually determined by size. Research into the courtship and mating habits of the West African dwarf crocodile is ongoing. However, much is still unknown. Toronto Zoo has bred this crocodilian many times.

The West African dwarf crocodile, as compensation for its small size, has an aggressive temperament as well as a strongly reinforced, thick body covering to protect it from injury. Since it spends a significant amount of time on land far from water foraging for prey (often larger than itself), it is vulnerable for extended periods.

The many sharp, conical, interlocking teeth are effective at tearing up food too big to swallow whole. These reptiles do not chew; lost and worn teeth are replaced throughout life. Being nocturnal, their black colouring helps to camouflage them both on land and in murky ponds. However, their long legs and diminutive size allow for easy movement over exposed roots and through thick vegetation. With well defined, webbed digits and strong nails they can negotiate muddy banks, walk on pond bottoms and excavate extensive bank burrows complete with underwater access tunnels (an exit and entrance) and connected to a cool den or chamber. During the dry season, when temperatures are high, these dens are occupied for extended periods. Undercut banks protected by tangles of exposed tree roots are often used. Individuals in the savannah dig pool-side burrows for aestivating. West African dwarf crocodiles do little if any basking.

This stealth hunter has a sharply upturned snout, and nostrils which are sealed when below the surface, allowing it to breathe while lying low in the water; the eyes placed high on the skull, permit the crocodile to see while nearly submerged. These are protected by strong, smooth, bony eyelids, and a clear, protective covering which can be pulled over the cornea (nictitating membrane) for protection and clear, underwater vision. Bony flaps keep the ear canals dry.

These crocodiles can sense vibrations and movement when subsurface vision is poor. Their pupils which are vertical slits when light is abundant can be opened wide for night hunting. A respiratory channel running from the nostrils to the back of the throat allows the crocodile to breathe when its mouth is full or open under water. The structure of the almost four-chambered heart which allows oxygenated blood to the brain and sends deoxygenated blood to the lungs lets the crocodile stay submerged for extended periods. The oar-like tail is a powerful propellant.

The habitat of the West African dwarf crocodile is being threatened and degraded by clear cutting, human settlement and farming; it is hunted as bush meat. Although its covering is of no commercial interest, local inhabitants create items for a small, local, skin trade. Because the hide is of little value economically, there is no attempt at sustainable farming which might preserve crocodile numbers. They are spread out unevenly over a vast range, often in remote places, so that reliable population numbers are difficult to ascertain.