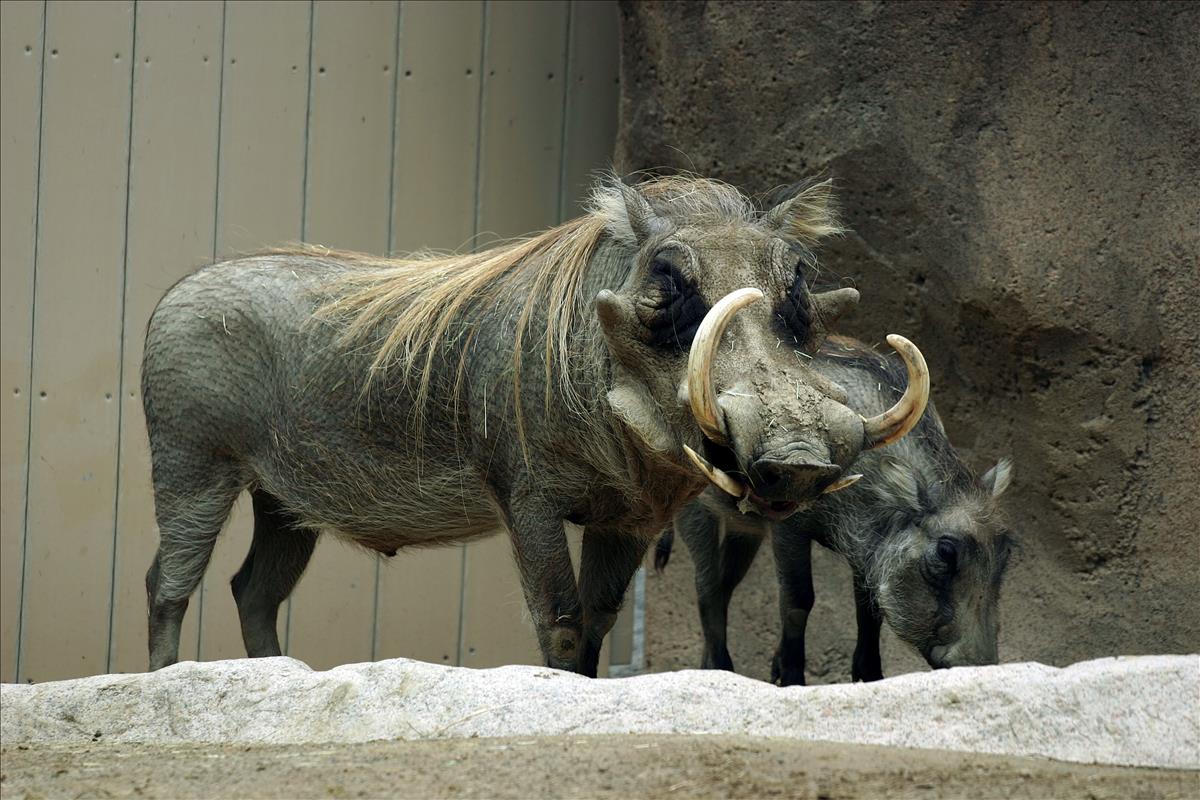 The warthog’s muscular body is a slate colour and almost hairless. A long thin mane of coarse hair extends from the nape to the middle of the back where it is broken by a bare space, and then continues on the rump. The remainder of the body is covered with bristles. The legs are remarkably slender for the size of the animal. The head is the warthog’s most prominent feature. It is large, flat, shovel shaped. The neck is very short and thick. Eyes are set high on the head. Warthogs have a typical pig's disc-like nose pad.

Males have three pairs of warts, one pair near the eyes, one on the snout and a pair on the lower jaw. The female's two pairs of warts are smaller, with none on the snout. Both sexes have four tusks protruding from the side of their snouts. The upper tusks are long and curve upward, while the smaller lower tusks are the sharper and more dangerous ones. Warthogs have a relatively long, tasseled tail.

Most of Africa, from south of the Sahara Desert.

Prefers an open habitat such as the grass steppes and lightly forested savanna landscapes, usually in proximity to a source of water.

Essentially a grazer, the warthog feeds on short grasses, seeds, roots, fruit, and occasionally carrion. They will also consume soil and bones for minerals and trace elements, and dung of other animals for the nitrogen content.

There are clearly defined mating seasons, with peaks occurring four to five months after the breaking of the rain, with births occurring mostly in the dry season. After a gestation period of 170 - 175 days, the female gives birth to a litter of two to four piglets inside a grass-lined burrow. The warthog sow nurses her young while standing.

Young emerge from the burrow at two weeks of age, but stay close and dive back in when alarmed. Piglets begin to accompany their mother regularly at about day 50, and are completely weaned by 21 weeks. Warthogs are sexually mature at about 18 months. Males, however, do not breed until they are about four years old. Young are temporarily driven away when the female is about to give birth to another litter, but they may subsequently rejoin the family. Warthog longevity in the wild is up to 10 years, 15 or more years in captivity.

Warthogs are mainly active during the day. They forage in family groups or “sounders” made up of 6 - 18 individuals, comprised of one or two females and their young from successive litters. Adult males may join this group, but they are generally solitary. Males separate from their mother at about 15 months. Interactions between members are friendly. Body rubbing and social grooming are common. At night and midday they lie in a den. This may be a cave, a hollow under a rock, or an abandoned aardvark burrow where the temperature conditions are constant. The young enter first, followed by the adults which push themselves in backwards in order to defend the entrance with their tusks. Dens are kept very clean. All members of the group will drop their dung together in one place. It is thought that this is a habit to confuse predators as to the number of individuals.

Although there seems to be no territorial defense, there may be competition for resources such as water holes. The area being used at a given time is marked with saliva and secretions from glands around the eyes. Family groups communicate by vocalizing, including grunts (when eating), growls, snorts, and squeals, which are used for greetings, contact maintenance, threats, warning, and submission.

Although warthogs have poor vision, the tiny eyes are located high on the face, allowing greater visibility over the open plains of its habitat. They may sit up like dogs for better visibility. Warthogs have an acute sense of smell and hearing. The warthog’s lack of fur makes it extremely vulnerable to extreme heat, so they seek relief by wallowing in mud. This also serves to camouflage the animal and protect it from biting insects.

Warthogs display a unique method of locomotion while feeding. They will go down and shuffle on their calloused wrist-joints or “knees” while grazing. If a warthog needs to run, they are actually quite fast, as they can run up to 48 km/h. This is due in part to their long legs.

Warts are skin growths, have no bony support and grow with age. They serve to protect the eyes during fights with rival boars. The warthog is usually inoffensive and avoids danger by flight. The raised tail is a danger warning to others. When cornered, the warthog will defend itself and can inflict severe wounds with its tusks, particularly the lower sharp ones. Tusks are ever-growing canine teeth.

Natural predators include lions, leopards and cheetahs. Warthogs are hunted for food and sport. They are sometimes destructive to crops. Eradication campaigns have begun where the warthog is a threat to domestic livestock, as it can be a carrier of swine fever.