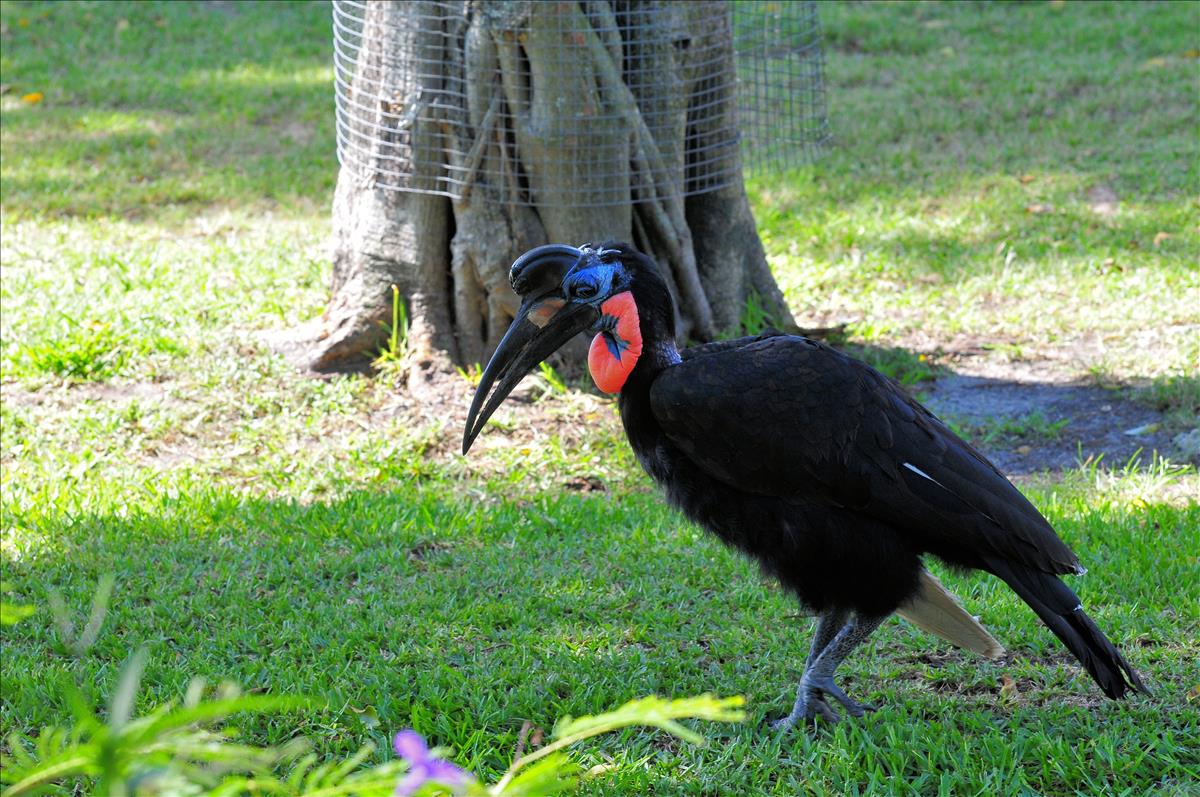 The ground-hornbills are the largest and heaviest of the hornbill species. There are two species, Bucorvus abyssinicus and Bucorvus leadbeateri. The southern ground hornbill sexes have the same plumage, being almost entirely black, with white wing patches seen when the bird is in flight. The male has a bare facial skin and an inflatable throat skin that is bright red. Both males and females develop these gular flaps. The females are smaller and differ by having violet blue patches at the throat below the bill, which can sometimes cover most of the facial skin. This patch is a pale yellow colour in juveniles that slowly turns darker over a period of about four years. Juveniles are browner than the adults with black flecks in the primaries, gray sides to the bill and pale gray-brown facial skin closely resembling the male adult. They have a strong, black beak that gently curves downward with a small casque between the eyes. This casque tends to be more developed in males. They have long eyelashes and stout, long legs. The male is generally larger than the female.

These birds are found in sub-Saharan and southern Africa, ranging from southern Kenya and Burundi, south-west to Angola and northern Namibia, and south to Botswana and eastern South Africa. They are widespread, but sparse, mainly confined to national reserves or protected areas.

They live in open habitats like grasslands, savanna or scrub with trees nearby. They prefer moist habitats, but they can be found at 3,000 metres in east Africa.

Southern ground hornbills are predominantly carnivorous feeding on reptiles, including snakes and tortoises, as well as frogs, toads, snails, insects or small mammals like rodents or even small monkeys. Some are known to supplement their diets with fruit or seeds, even some carrion.

These birds are monogamous forming permanent pair bonds. They have been seen to touch bills in courtship rituals. They usually build nests in tree cavities, where the female will lay an average of two eggs between September and December. They are laid a few days apart, so the chicks do not hatch out at the same time. The female sits while the male forages and feeds her. The female only makes three to four brief trips out of the nest per day, so is largely reliant on the male and helpers to provide food.

Eggs will take between 37 and 43 days to hatch. Once the eggs are hatched, both parents help rear the young. Chicks hatch with pink skin, turning black within three days. Typically the first chick to hatch will be the one that survives, being stronger than its sibling and taking all the food, so the younger chick will die of starvation within days of hatching. They are co-operative breeders, meaning that the dominant pair is assisted by adults and immature juvenile helpers, who defend their territory. The juvenile bird will be ready to leave the nest at about three months of age but will continue to depend on its parents for up to a year and may stay with its family group for nine years or more. Two to ten birds form cooperative groups; only the dominant pair will breed and the others will help to find food and defend the territory. These birds can live 30 - 40 years in the wild and up to 50 years in captivity, but they are slow breeders. Some populations only raise one chick to maturity every nine years or so, while others breed more frequently.

Although they have a wingspan of up to two metres, they are rarely seen in flight, but are nonetheless strong but low flyers. Southern ground hornbills are non-migratory. They feed mainly on the ground, walking long distances in their territories to find food. A territory of up to 100 square km could be defended by a single pair or by a larger group of up to 10 birds. It forages in groups, so that when one bird locates a prey item it can signal the rest of the flock with a low bark. It often finds prey by digging, especially in dung heaps, and it may snatch food from birds of prey. They are cooperative hunters and will act together to kill large prey. Snakes are crushed and shaken; other prey may be repeatedly stabbed. When gathering food to take back to their nest they will carry a beak full of insects around which they will carefully put to one side if they spot another tasty morsel (perhaps a large spider or grasshopper). They will pick up the new delicacy, then carefully rearrange all the food items on the ground before picking them back up and stalking away.

At night they roost in large trees and in the early morning their loud booming territorial calls can be heard. They will walk their territories with other creatures like antelope or zebra, using their keen eyesight to see and take advantage of any food items that may be disturbed by other animals.

Since these birds occupy large territories, their numbers are restricted. Southern ground hornbills have one of slowest reproductive rates in birds. They are sometimes hunted by humans as pests and because of cultural beliefs. Habitat destruction leads to loss of nesting habitat; widespread grazing leads to degraded grasslands.