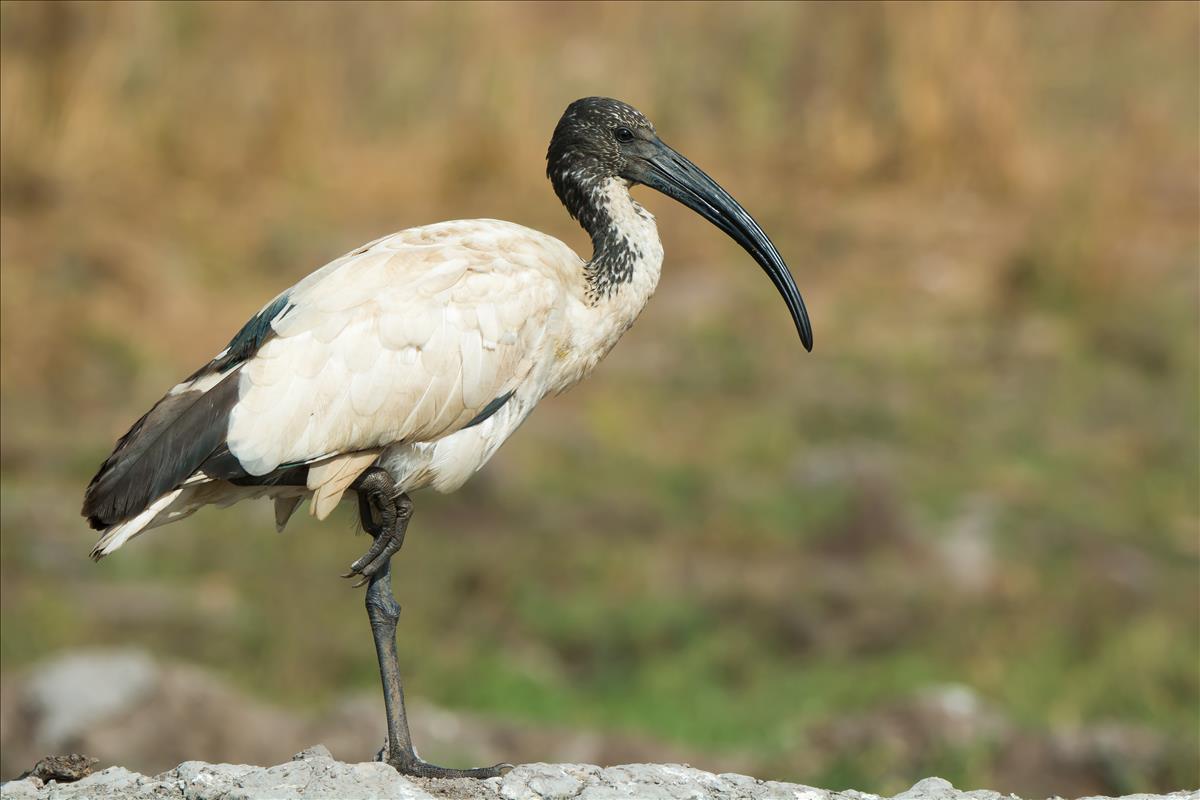 This is a long-legged bird with a slender, down-curved bill. The head and neck are bare; with black skin, and their plumage is mainly white with flights tipped with black, glossed with green. The scapulars are innermost secondary’s ending in ornamental, fluffy plumes of iridescent violet. The iris of the eye is brown with the outer rim crimson. Bill, legs and feet are black. When immature, birds have their head and neck covered with white feathers mottled with black and without the ornamental plumes. By the third season, the head and head and neck are bare of feathers. Sexes are alike.

Throughout Africa, east to the Persian Gulf and Madagascar. The ibis has been introduced into parts of Europe. At one point in time this species ranged into India and Australia. These two areas now have been classified as separate species.

Common on the upper Nile and on many of the larger freshwater lakes and swamps throughout Africa. They can also be found in saltpans, village dumps, and inlets.

On wet banks or in shallow water, they use their long, curved bills to retrieve fish and amphibians. On dry land, they eat locusts, other insects and small reptiles, or eggs of other birds and reptiles. The ibis is considered a carnivore with omnivore tendencies, and has also been spotted in village areas, to snack in dumps; as well as animal refuse.

They nest in colonies often in association with night herons and other related species; usually on flat-topped thorn trees, on the ground or rocky inlets, and among reeds in swamps. They sometimes nest in towns and villages. The ibis’ nests are built of sticks lined with grass and reeds, usually carelessly put together. Both sexes share in nest building and incubation of the young. Mating usually occurs during the rains with a normal clutch size of two or three greenish or bluish-white, chalky eggs specked and streaked or blotched with reddish-brown. They measure about 6 x 3.8 cm. Incubation time is from 21 to 23 days.

Long legs adapted for wading with a correspondingly long neck and long, curved beak; which is great for digging in the mud for food. The ibis doesn’t cross the equator, with colonies living south of the equator migrating south and northern colonies migrating north. They also forage for food during the day in groups of up to 20 birds. During the evening, the ibis roosts in large numbers on their nesting grounds.

Destruction of habitat. The predation of eggs and young by various mammals, reptiles, and other birds is also a threat. Although IUCN considers the sacred ibis to be of least concern, the numbers do seem to be dwindling. It is said that in some parts of their range hunting is a possible cause of decreasing numbers. In Europe they have been introduced and are considered an invasive species; with potential to damage the nesting sites of terns.