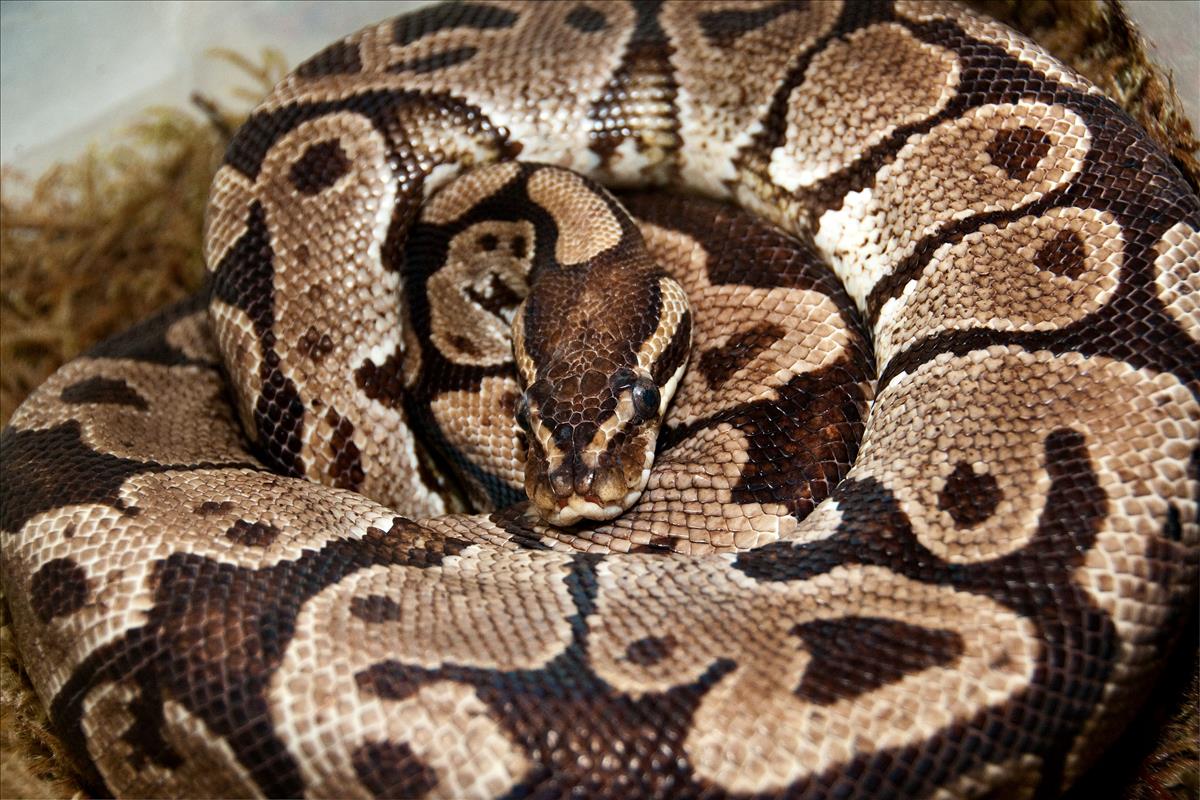 This is a very attractive snake. The patterns and colours vary depending on geographic location. The colour pattern is typically black or dark brown, with light brown or gold sides and dorsal blotches. The patterns vary from being striped, spotted, banded, rectangular, and blotched. There is a black edged band along the back. The belly is ivory and may include scattered black markings. They may also have yellow stripes from the nostrils through the eyes. The regional combinations of colours and patterns all result in beautifully marked snakes.

They are stocky robust snakes with a slender neck and distinctive head; the head being larger than the neck. The scales are smooth. Adult female ball pythons are larger than adult males. This sexual dimorphism is not present in neonates, but is apparent in adults. Adult females also have longer jaws than their male counterparts. At birth, royal pythons range from 25 to 43 centimeters in length and grow to 1 to 1.5 meters as adults. Lengths of up to 1.83 meters have been recorded.

Royal pythons are found in western to central Africa, just north of the equator. They are native to the Sudanese sub-province west of the Nile, in southern Sudan, the Bahrel Ghazal and Nuba Mountains Region, from Senegal to Sierra Leone in West Africa, and in the Ivory Coast and some parts of Central Africa.

They are found in grasslands, shrub lands and open forests. They often shelter in abandoned underground burrows or root tangles. They are typically found near open water so they can cool themselves during hot weather.

Carnivorous; birds, small mammals, eggs. These are non-venomous snakes and all members of this family kill their prey by constriction (throwing one or two coils around their victim). Death is caused by suffocation and heart failure.

Female royal pythons reach reproductive maturity from 27 to 31 months. Males reach reproductive maturity at 16 to 18 months. The breeding season is primarily from mid-September through mid-November, correlating with the rainy season. Females may mate with several males. Both male and female royal pythons have large cloacal spurs. Males' spurs are longer, and stimulate the female during courtship. During copulation he wraps himself around the female. The male has two intromittant organs, called hemipenes but only one is engaged during mating. After successfully mating, females stop eating as eggs develop.
Royal pythons have long reproductive lives that last from about 27 months to 30 years. Clutch size therefore varies with the age and size of the snake. They lay from two to eleven eggs which adhere to each other. Females after laying their clutch of eggs immediately coil protectively around them. They remain positioned this way throughout the incubation period which lasts two to three months until the eggs are ready to hatch. Baby royal pythons slit the shells with their egg tooth and work their way out. Weight at birth is 65 to 103 grams, with an average of 86 grams. Hatchlings are immediately independent, but remain in the vicinity for a few months.

Not only does the coiling of the female around her eggs protect them, it also assists in providing thermoregulation. In cool climates brooding females maintain high and constant temperatures within the clutch by shivering (thermogenesis). Shivering helps the body create heat resulting in her temperature rising above ambient temperature, thus providing true incubation.
Royal pythons are also known as ball pythons. They are given this common name for their protective mechanism of “balling,” where they form a tight ball with the head at the center in response to threats. Other protective adaptations are excellent camouflage, seeking cover to avoid predation, escape strategies, bluffing displays, and if necessary biting.

They are crepuscular being most active early in the morning or late evening. They spend most of their time on or in burrows under the ground, although they are able to climb. As heavy-bodied snakes, they are less active and instead choose good ambush sites; they sit and wait to ambush prey. The feeding strategy is to retract the head and neck and strike rapidly. After the rapid strike, prey is immobilized by constriction, and then swallowed. They have mobile lower and upper jaws.

In common with other snakes they are provided with an extremely effective olfactory organ (Jacobson's Organ), in the roof of the mouth. The tongue continually samples the air and transfers particles to the Jacobson's Organ. The members of this family have small rectangular openings on the upper and lower lips which enable the snake to perceive faint heat radiations.

Encroachment of civilization. Some known predators, especially of young pythons, include humans, carnivorous mammals, and birds of prey. Locally, this species is poached for meat and leather. However, their biggest threat is the international pet trade. In West Africa, many thousands are captured annually and exported. In addition, farmers may kill ball pythons out of fear. Bush fires can also affect ball python populations.