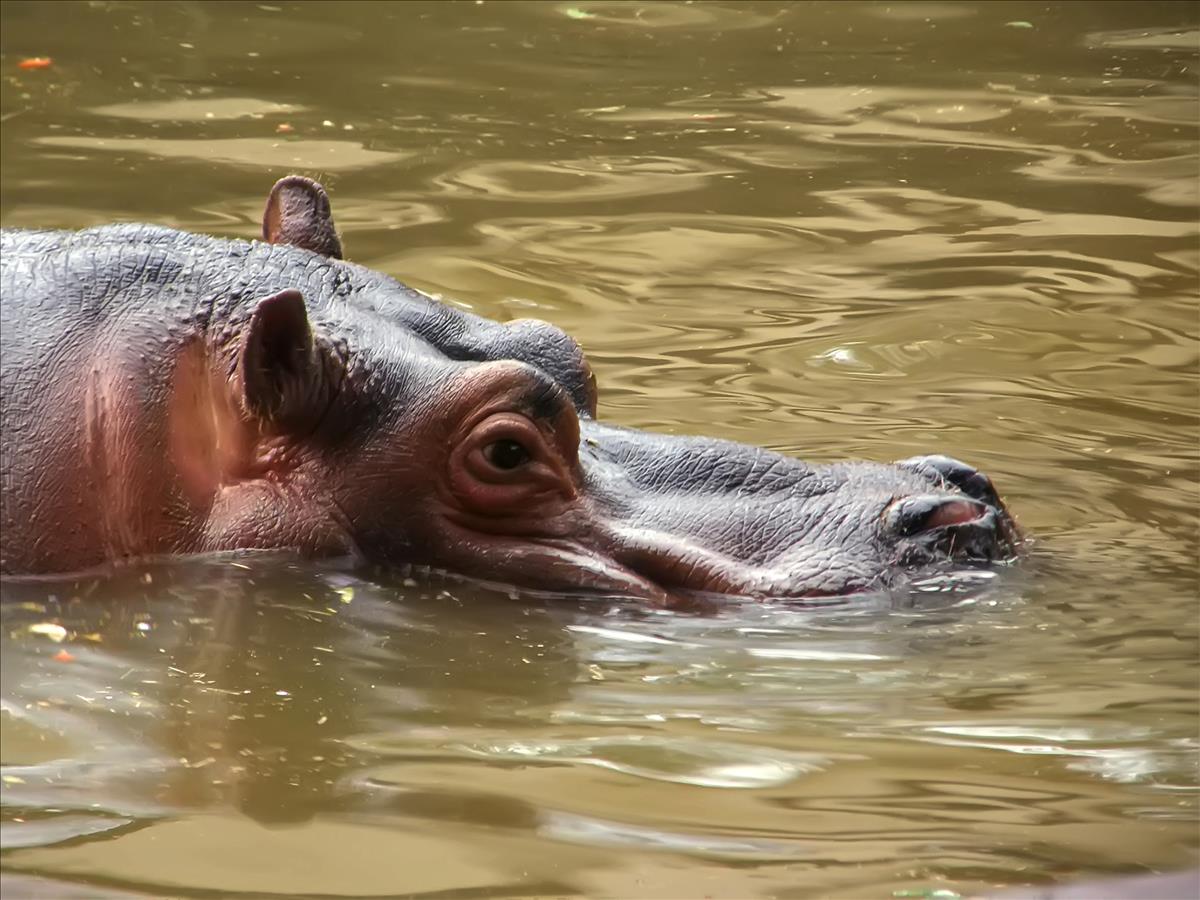 The river hippopotamus is the 3rd heaviest land mammal (after the elephant and white rhino). It has a bulky, barrel shaped body and a massive head with an enormous broad muzzle up to 50 cm wide. The neck is short and thick, with heavy folds of skin. Their skin is very thick, up to 3 inches in most places! The eyes are protruding and the small movable ears are set high up and far back on the head. The nose is slit-like. It has stout, but disproportionately short legs with four partially webbed toes on each foot. The pseudo claws are well developed.

The body is scantily covered with short fine hairs, but appears naked. The usual skin colour is slaty copper brown, which shades to dark brown above and purplish below. Skin is glandular and exudes droplets of moisture containing a red pigment, which has been termed “blood sweat”. The skin contains a layer of fat, five cm thick. The short round tail is partly flat and has a bristled tip. The only other bristles that are evident are around the wide mouth. Jaws can open to 180 degrees.

The hippo is equipped with an impressive set of teeth. The upper canines can be 23 cm in circumference and the larger lower canines are about 60 cm long, weigh up to three kg and project upward and outward. Both incisors and canines are tusk-like, made of ivory and grow continuously.

Africa, south of the Sahara to Namibia and South Africa.

Ponds, lakes, rivers, and wallows by day; grasslands and forests at night. Will occasionally descend streams into salt water.

Herbivorous. They eat mainly dry, short and tough grass. Hippos do not eat aquatic plants. They will eat some fallen fruit and other vegetation. The hippo is a nocturnal grazer. At dusk it moves out of the water to feed for seven to eight hours, usually feeding within two to three km of its watery resting place and may travel up to 30 km to feed. It follows regular paths to do this and over time, distinct trails are formed. Sometimes they are so eroded that virtual trenches result. The hippo's daily consumption is about 1 - 1.5% of its body weight, capable of eating up to 45 kg of plant material per night. The vegetation is cropped entirely by the action of their muscular lips. In any 24-hour period, hippos will drink about 25 litres of water.

Mating can take place at any time of the year, but mostly occurs in the dry season and always in the water. Most calves are born in the rainy season after a gestation period of approximately 240 days. The mother goes off on her own before the birth and remains away from her group for about 10 to 44 days after the calf is born. Birth takes place either on land in weeded areas close to water or, as is most often the case, takes place in the water and the young must rise quickly to the surface to draw its first breath.

Normally a single calf is born (twins are rare), weighing about 50 kg at birth and measuring 127 cm in length. Suckling takes place in the water and lasts for about a year. Babies are programmed to nurse underwater, popping to the surface every few seconds to breathe, their ears fold and nostrils close while suckling. Serious grazing begins by five months of age. In the wild, the young are protected in nurseries (consisting of mothers and young) from the aggressive adult males until they are seven weeks old, at which time the mother and child return to the larger herd (20-30 animals). Females conceive typically at nine years of age (range 7 - 15), calve at two year intervals and males become adolescent at seven to approximately 12 years of age. Hippos have a lifespan of 40-50 years.

Hippos are gregarious, living in herds of as many as 30, containing females and their offspring, young males, and a single dominant bull that defends its length of shoreline as a territory. The male hippo marks his territory and shows off his superiority by producing tons of excrement, which he flings about as he wags his short tail vigorously. This behaviour occurs both in the water and on land. Sometimes a hopeful youngster will challenge the territory holder and if the animals are well matched, a great battle ensues, during which extensive injuries may be inflicted by the enormous canine teeth, often leading to the death of the defeated animal. Confrontations between territorial bulls are highly ritualized and it is only when the territory is at stake that serious fighting occurs. The huge canine teeth are the principal weapons of hippos and they are prominently displayed and signaled as a warning when a male opens his mouth in a huge yawning gape and bellows. For the most part however, the relationships between the territorial bulls and the other males, particularly the young ones, are extremely friendly. A bull may hold a territory for as long as 12 years.

Hippos spend most of their day in the water and will often come onto land in order to bask in the sun, but they never wander too far so that they can easily slip back into the water if they become over-heated or dehydrated. The skin is very sensitive and will crack if exposed to direct sunlight for long. When out of the water, the hippo secretes an oily red fluid produced by the mucous glands that functions to protect the skin from sunburn and drying. For two thirds of their day they lie in the water with much of their body submerged; only the eyes, ears and nostril are visible. When completely submerged underwater, a reflex action ensures that the nostrils and the ears are closed by muscular valves as soon as they come into contact with the water. Air in the lungs is expelled in an explosive burst on surfacing, and the ears are wagged furiously to clear them of water. Hippos stay underwater for three to five minutes, but can remain under longer. Hippos sleep underwater and sleeping hippos rise to breathe, resurfacing as automatically as breathing itself.

Hippos cannot float and those animals seen on the surface are really standing in the shallows. They prefer shoulder-deep still or slow moving water and when in deep water they move along the bottom by a series of porpoise-like leaps. Alternatively, they may move with a series of high, prancing steps. On land hippos can run at a speed of up to 40-45 km/h.

Hippos have a variety of vocalizations. The most characteristic call is a series of one long roaring grunt and several short ones produced as it surfaces. It also roars, screams, croaks, clicks, and whines. Bulls, when fighting, emit furious, loud bellows. Calls transmit through water as well as through air; underwater croaks are a short-range contact call. Calls are loud, up to 120 decibels, and include sounds below the frequency limit of human hearing.

The primary threats to river hippos are illegal and unregulated hunting for meat and ivory (found in the canine teeth) and habitat loss. Illegal or unregulated hunting of river hippos has been found to be particularly high in areas of civil unrest. It is also killed for sport and as well because it sometimes enters cultivated fields and does extensive damage by eating and trampling crops.