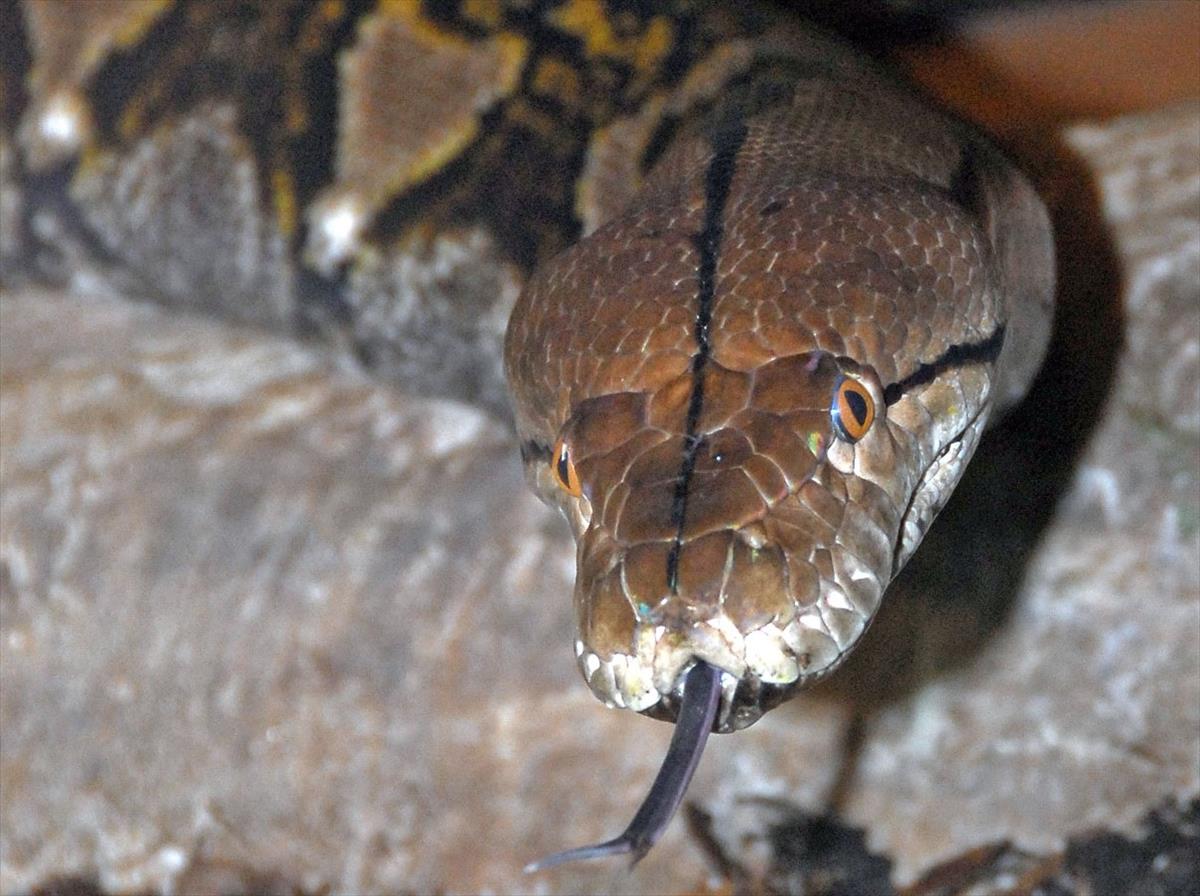 Reticulated pythons have complex, geometric skin patterns. The name refers to the net-like appearance of bold, dark, oval, or triangular markings on a lighter yellowish or brown background. These are flanked by smaller markings with light centers. The skin is iridescent. A black line extends over the head from the nose to the neck and another on each side from the eye to the angle of the mouth. The underparts are mostly yellowish, with small brown spots on the sides. This is a very large snake. Its potential length is longer than any other species of snake. Lengths of five metres are common and lengths of over seven metres occur regularly. They are sexually dimorphic in size, females are larger than males. The longest on record is 10 m. Maximum recorded weight is 158 kg. This species can live up to 25 years or more.

Southeast Asia,from India to the Philipines.

Tropical forests and hillsides, often found near ponds and streams.

They are strictly carnivorous and kill by constriction. Having a low metabolic rate they are mainly ambush predators. Small, younger pythons feed mostly on rodents. As they grow longer prey items taken become larger and include pigs, deer, pangolins, porcupines, and monkeys.

Sexual maturity is reached within four years. Males breed at between 2.13 and 2.75 m. and females become receptive at around 3.35 m. Breeding usually takes place between September and March, triggered by changes in light and temperature levels. The number of eggs laid varies, usually the larger the female, the greater the number of eggs laid, most often between 25 and 80. She may fast during this period. The eggs are large, oval and soft shelled and hatch in 80 to 90 days. Females coil around her eggs and “shiver” by producing muscle contractions to increase the temperature of her eggs. She will also defend them against predators. Once hatched, baby snakes become independent. Hatchlings may measure from 55 to 75 cm and weigh 250 grams or more. Growth is fairly rapid during the first few years. Generally speaking, a three metre reticulated python is three to four years old. Growth slows down with advancing years.

A versatile jaw enables snakes to swallow food head first and whole, even when the prey is larger in diameter than the snake's body. The quadrate bone, connecting the lower jaw loosely to the skull works like a double jointed hinge so that the snake can drop its lower jaw at the back of its mouth as well as at the front. The lower jaw can also be stretched sideways since its two halves are connected at the chin by an elastic muscle. Sharp, recurved teeth hold the prey in place while the snake, moving first one side and then the other of its mobile jaws seems to "walk" its gaping mouth forward around its food. As with all snakes the overlapping scales of the skin expand to accommodate the size of the meal. The highly variable pattern which adorns its iridescent skin provides very effective camouflage. The retina of pythons has both types of cells - rods and cones. The former are dim-light receptors, the latter bright light receptors. Four upper labial shields of each side are pitted. Chemoreception is well developed in pythons.

Young snakes are vulnerable to many predators. Larger snakes are hunted for their skins. Blood letting and gall bladder removal also occur.