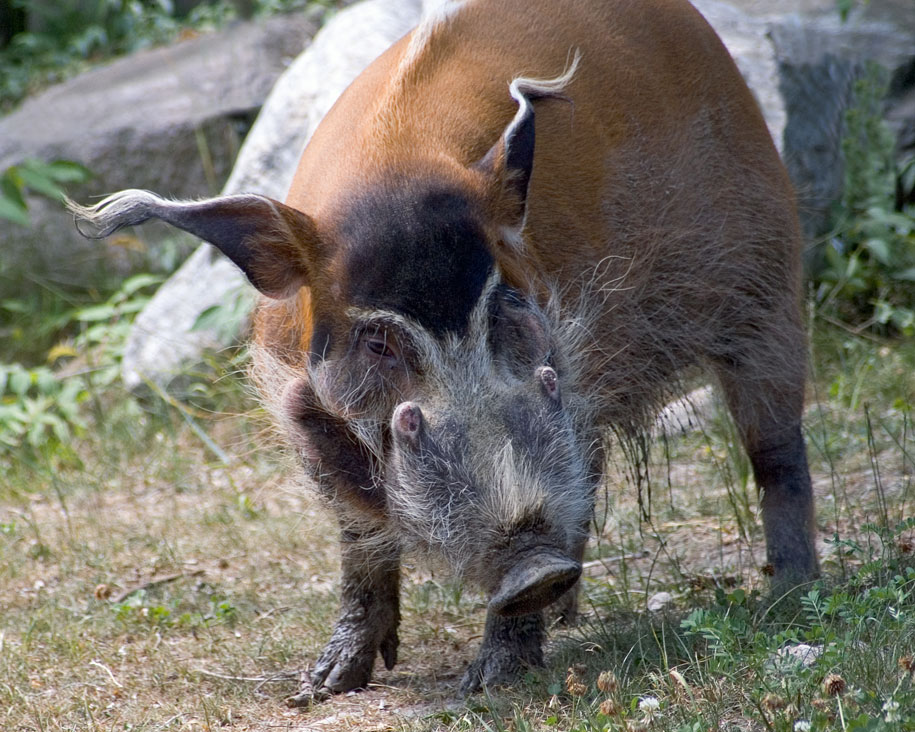 As all pigs, the red river hog is an even–toed ungulate and although they have four toes on their feet, they walk only on their third and fourth digits with the remaining two held clear of the ground. They are stout bodied animals with short red fur including contrasting black and white markings on the head, and a white eye ring. The leaf-shaped ears have long black and white tassels and an erect, long bristled, white mane runs the length of the back. The tail is long and hairless except for a double tuft of bristles at the tip. These features are used as defenses because, when fluffed out, they greatly increase the perceived size of the animal. The head is disproportionately large, the muzzle long and narrow which, in males, has lengthwise ridges and warts, usually hidden in the long facial hair. The upper tusks are relatively small and almost invisible, whereas the lower ones are razor sharp and grow to 18 cm in length. Their body length varies from 100 to 150cm, shoulder height is 55 to 80 cm and a tail length of 30 to 45 cm. Weight is between 45 and 120 kg. Males tend to be larger than females.

Primary and secondary forests, riverine habitats and thickets in savannas, swamps, and steppes. They also congregate around human villages.

Their main food is roots and wild fruits but they supplement these with grasses, seeds, water plants, bulbs, and nuts. Being omnivorous, they also eat carrion, small animals, young birds, bird eggs, snails, reptiles, and insects. They are also known to prey on domestic livestock such as goats and sheep.

The breeding season lasts from September to April and is at its peak during the wet season from November to February. They are monogamous, where both the mother and dominant boar of the small familial group supply care and protection to the young. Females give birth once a year after a gestation period of 120 to 127 days. The sow makes a “bower” (shelter) in long grass for her litter. The number of young per birth ranges from one to four piglets and on rare occasions as many as six to eight. When first born, the young are brown with longitudinal yellow stripes which later turn into rufous brown. Sexual maturity is at 18 to 21 months. Red river hogs may live up to 20 years.

Red river hogs are most active during the night. They rest in self excavated burrows deep within impenetrable vegetation. Their long snouts are excellent for exposing roots but can also cause considerable damage in the cultivated parts of Africa. They live in sounders consisting of one mature boar and 2 to 15 females with young and may cover a territory of over 4 km between resting and feeding areas. They have a habit of wallowing in muddy ponds and streams, are good swimmers and fast runners but stand their ground when threatened.

Other than lions, hyenas and pythons, their main enemy is the leopard who will kill their young. But because of the pig’s strength, sharp tusks and belligerent disposition, many leopards have been forced into trees by the hostile actions of adult pigs.