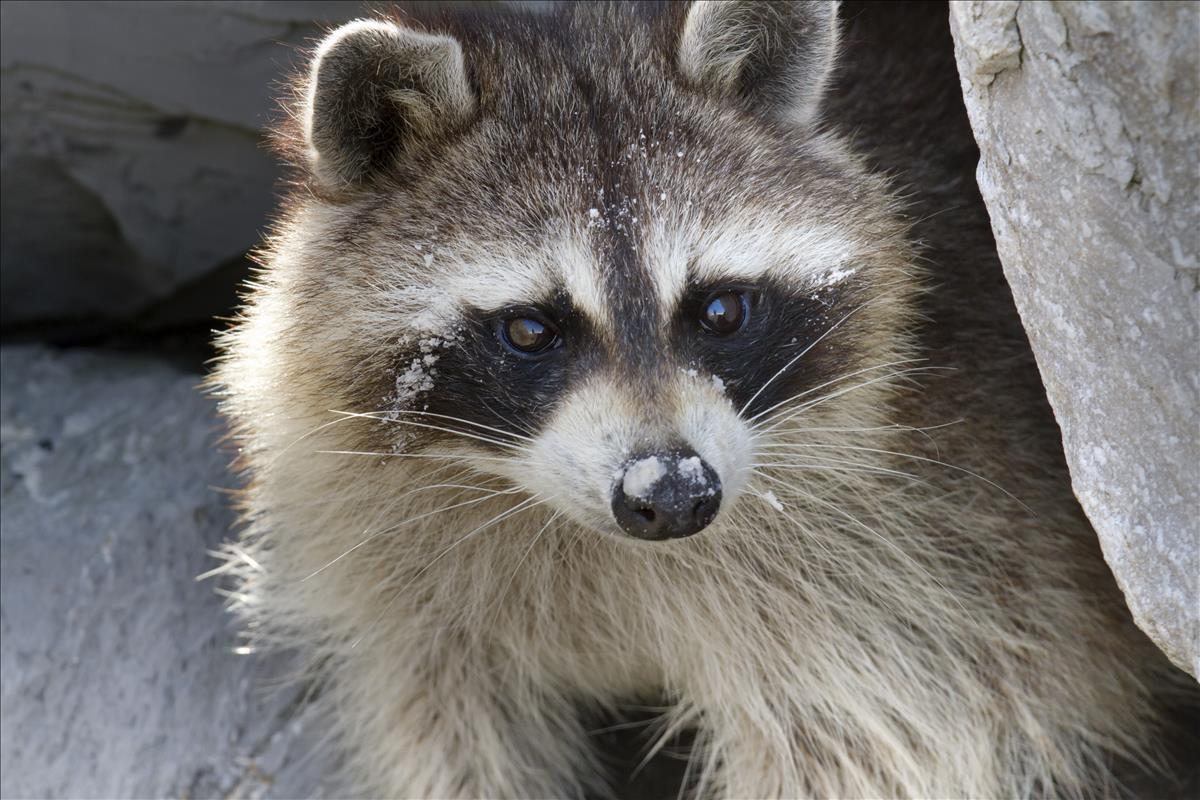 Raccoons usually have long grayish-brown fur on the tops of their bodies, and light gray fur underneath. Distinguishing features include dark cheek patches, a vertical stripe between the eyes, a black mask across the face and a long bushy tail adorned with six to seven brown or black rings. The large round head is broad and tapers to a pointed muzzle with short, round and erect ears. The body is short and stocky. Each naked foot has five toes. Footprints resemble human hands and feet. Generally, males are larger than females and northern animals are larger than southern ones.

Found from southern Panama north to the fringe of the boreal forests in Canada. They have been introduced into Russia and Germany.

They occupy rural and urban areas usually close to water and are found in a variety of habitats.

Mating begins for northern populations around March, with births occurring mostly in May. Southern populations can start breeding as early as January and February, and have even been recorded breeding year-round. Males are polygamous while females are monogamous, and will not tolerate other males after breeding. Females will mate during their first year. Males however, even though they are physically able, do not usually breed until their second year. Females give birth to a litter of one to seven pups after a gestation period of 63 - 66 days. Young are born without teeth, with closed eyes, and weigh approximately 75g. They can nurse for up to four months. The eyes open at two weeks of age, and the teeth erupt after approximately 19 days. The young develop their “mask” at about 10 days. Males do not provide care for the young. Normal life span in the wild is three to five years, although on occasion, in captivity they have reached 12 to 16 years of age.

The nose and paws of raccoons are very sensitive. The front paws are capable of sending three-dimensional images to the animal’s brain, allowing it to “see” while fishing around in dark, murky water. These “hands” are extremely dexterous. Raccoons are generally nocturnal and completely omnivorous, being one of the few animals to benefit from living with humans, learning to survive by scavenging our food waste. During the winter months raccoons do not hibernate, however they minimize their activity in order to conserve energy. During this time, an animal can lose up to 50% of its body weight. In southern areas they are active throughout the year. In northern areas they remain in a den for much of the winter, but will emerge during relatively warm weather. In northern environments, raccoons accumulate large amounts of fat during late summer and autumn in preparation for extended periods of sleep (up to six months) during the winter. Raccoons do most of their hunting and foraging on the ground, but do prefer to make their dens in the hollows of trees, and therefore are very good climbers, being able to descend a tree either head or tail first. They are also extremely good swimmers, which is beneficial to their preference of being close to water. The name raccoon comes from the Native Algonquian word arakun, which means “he who scratches with his hands”. Captive and urban raccoons are often seen “washing” their food in water prior to eating. In spite of previous speculations, it is now thought that they are not cleaning their food, but instead are mimicking “fishing” for their meal, a normal behaviour in the wild. Toronto is one of the cities in North America that currently has the highest densities of raccoons. Since raccoons are nocturnal they spend the day sheltered in abandoned houses, barns, culverts, hollow trees, brush piles or dens of other animals. Home ranges vary according to food abundance and range from 12 to 6,000 acres. Densities range from 1 to 600 individuals per square mile, with the highest densities occurring in urban areas.

Human population explosions are causing the destruction of natural raccoon habitat, as more land is being cleared for residential and commercial structures. Animals are also being killed, as they are thought of as “pests” by a great number of people, although this does not seem to be significantly reducing their urban populations. Hundreds of animals also succumb each year to vehicular fatalities. Main natural predators are coyotes, bobcats and alligators.