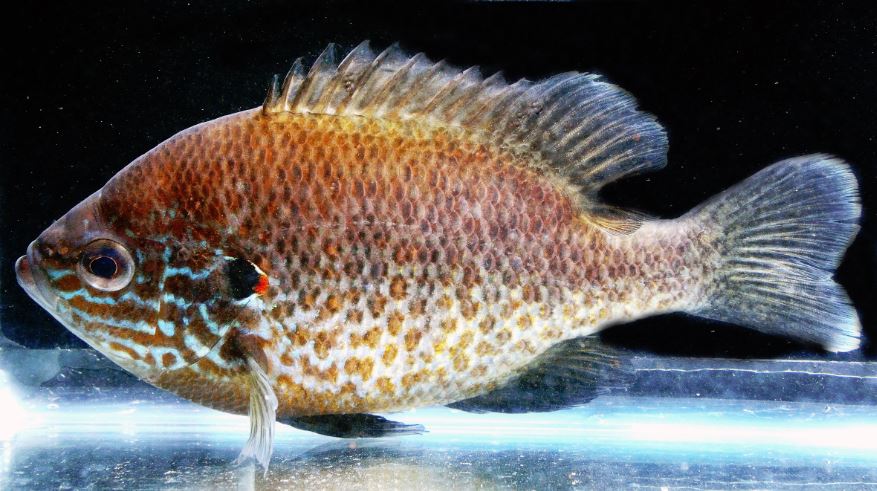 A very deep-bodied, laterally compressed almost disc-like fish usually 18-23 cm in length. The greatest body depth is at the fifth or sixth dorsal spine. Angle from snout to dorsal fin steep, back humped and rounded even under dorsal fins. Dorsal surface of head, body and upper sides are golden with irregular, wavy, interconnecting blue-green lines. The ventral surface is bronze to red-orange; sides of body and head are flecked with spots of olive, orange or red and with blue, emerald or green reflections. Opercular flap (gill cover) is short, black in the centre, edged with white or yellow, with a prominent well-defined red spot at the posterior edge (this is a species identifier). Sides have several vague vertical bars. Sides of head have prominent, wavy, blue-green stripes. Pupil of the eye is black with a narrow, iridescent, golden ring around this and larger area brownish dorsally, blue-green ventrally. Females are paler with more prominent vertical bars. Hue of pattern is variable depending on state and condition of individual, water clarity and background. All colours intensified in breeding males. Young have much less colour pattern and only green to olive background colour. There are five species of sunfish; the redbreast, green, bluegill, longear and the pumpkinseed. They are closely related to the rock bass and, more distantly to the smallmouth bass.

The fresh waters of eastern North America from New Brunswick south along the Atlantic seaboard to northeastern Georgia, from southern Quebec to southern Ohio, west to northern Missouri, north through eastern South Dakota to eastern Manitoba, east through western Ontario, Minnesota to Michigan and across southern Ontario. It has been introduced into California, Wyoming, Montana, Washington, and Oregon and probably many other states west of its natural range. In Canada it occurs from southwestern New Brunswick, southern Quebec including the St. Lawrence River and tributaries, Lake Champlain, eastern Townships and the Ottawa River and its tributaries. It is common in Ontario occurring generally north to a line from the Ottawa River, north to Lake Nipissing to Sault Ste. Marie. It is also present in the Nelson River drainage of western Ontario and southwestern Manitoba. It is also found as a result of introductions in southeastern British Columbia and southern Vancouver Island.

Small lakes, ponds, shallow weedy bays of larger lakes, and in the quiet water of slow-moving streams. It prefers clear water and the cover of submerged vegetation or brush and ranges over various types of bottom.

Primarily a variety of insects and some invertebrates (dragonfly nymphs, ants, larval salamanders, amphipods, mayfly nymphs, midge larvae, roundworm, snails, and water boatmen etc). Small fishes and other vertebrates can at times contribute as much to the diet of adults as the most frequently eaten insects.

Spawning usually begins in late spring to early summer. The nest, constructed by the male, is in shallow water, usually in depths of 15-30 cm near shore. Nest building begins when water temperature reaches approximately 20° C but nesting has been noted in August at 27.8°C. Nests are shallow depressions 10-40 cm in diameter. There is considerable display and swimming in a circular path during courtship and mating. Egg-laying takes place during these circulations with the male upright and the female at a 45° angle so that their ventral surfaces are together. Small numbers of eggs and small quantities of sperm are emitted at irregular intervals. Eggs, which are pale amber in colour and about 1 mm in diameter, adhere to the bottom of the nest on soil particles, small stones, roots and sticks. Number of eggs increases with size with the average number ranging between 1,684 and 2,923. The male strongly guards the eggs and fans them, and guards the newly hatched young for up to 11 days, returning them to the nest in his mouth if they stray. Hatching takes place in as little as three days at 28°C. The newly hatched young are minute and transparent and for some time only the dark eyes are visible. Growth is moderately fast.

It is one of the most widely distributed fishes in Ontario and often makes up the largest part of the fish population of small bodies of warm water. They are an important food fish at all of their life stages for predatory species.