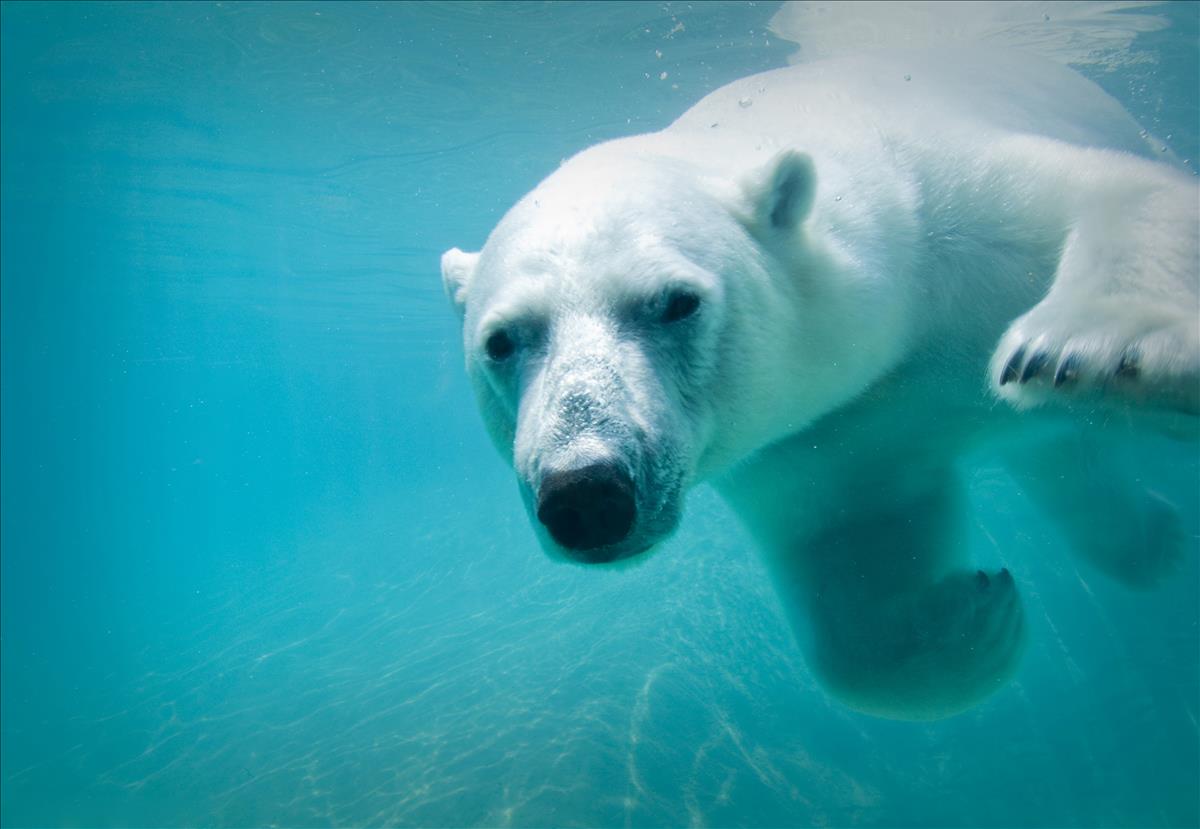 Polar bears are considered the largest land carnivores in the world, matched only by very large individual Kodiak brown bears. Both sexes differ in size throughout their range; males being much larger than females and continuing to grow for a longer period of time. These bears have long, massive skulls, necks and bodies with long legs and large paws. Ears and tail are short. The nose is more prominent or “Roman” with a black rhinarium (nose pad). The tongue is black and the eyes brown. The surface of the skin is also black. Fur colour varies slightly with the season: new coats grown just prior to the winter season are very white appearing as slightly creamy white against the stark white of their icy winter environment. This pelage is thick, coarse and long with dense underfur. Guard hairs, found throughout the pelage, are shiny, almost glossy, oily and waterproof and have hollow shafts. Polar bears moult annually between the end of May and August. The coat becomes thinner and has a yellow wash or is almost a golden colour.

The polar bear is circumpolar in distribution, inhabiting all Arctic seas and coastlines. It is found on the pack-ice off the Alaskan coast north of Bering Strait, off the coasts of Greenland and along the Eurasian Arctic coast from Spitsbergen to Wrangell Island. Rare stragglers reach Iceland. Individual bears have been seen on the frozen Arctic Ocean as far as latitude 88 degrees North, only 2 degrees from the North Pole. In Canada, they are found along the Arctic coasts from Alaska to Labrador and from the tip of James Bay to northern Ellesmere Island. Polar bears do roam as far as 150 kilometres inland into the coniferous forests, where they live very differently from the polar bears which belong to the high Arctic.

They prefer areas of annual ice, which they use as a hunting platform and protective cover. This includes snow-drifted pressure ridges, refrozen cracks and areas of open water surrounded by ice. In areas where the pack ice melts by mid to late summer they come inland and live in coniferous forest areas. Here they remain until the ice re-freezes. Areas of solidly frozen sea ice and the open seas are avoided. Generally they are most common along coastal areas. Some do enter the permanent pack ice.

The ringed seal is by far the most common prey. They also eat bearded seal, harp seal and hooded seal. Young walrus are sometimes taken. During the summer months they feed upon the shoreline carrion, fish, mussels, crabs, starfish, lemmings and the eggs and nestling young of waterfowl and cliff-dwelling birds. They will also graze on kelp, grasses and eat mushrooms and crowberries.

Normally they are solitary animals outside the breeding season, the exception being a mother with cubs. Polar bears mate in mid-summer. Females first start to breed at 3 to 5 years of age. In April and May adult females are in oestrus and ready to accept a mate. They are polyandrous, meaning one female will mate with more than one male in one breeding season. Males fight among themselves for the female’s attention and a couple will pair off for a period of a few days to two weeks. With females, delayed implantation occurs, the fertilized egg does not implant in the uterus until mid-September to mid-October. Embryonic development begins at this time. Gestation periods, therefore, vary a great deal when including this period of delay. Females choose suitable locations to build their maternity dens in mid-October and retreat to them for the winter season. They give birth to one to four cubs somewhere between late November and early January. Twins are most common. The newborns are small; 25 to 30 cm long and weigh less than 1 kg. They are covered with very fine hair, appearing almost naked and their eyes are closed. Their eyes open at 6 weeks. Growth is very quick; at two months their fur has thickened; they weigh about 5 kg and move about the den. By mid-March to early April, when the den is opened, the cubs weigh about 10 kg and are surprisingly strong. The cubs suckle for nine months, occasionally one year. They are very dependent on their mother and stay with her for two years. At that time they weigh 90 - 180 kg and are half grown.

Polar bears are wonderfully adapted to their Arctic surroundings.

Locomotion. On land a shuffling walk may be increased to a rolling gallop of 40 km/h and can outrun caribou over a short distance. Bears are often seen standing high on their hind legs, necks stretched to scan the landscape. On thin ice, legs are spread to distribute body mass. Thickly padded and furred soles allow the bear to move quietly as well as providing good traction. Small bumps and cavities on the soles act like suction cups keeping bears from slipping on the ice. The claws are used to dig into icy slopes and to grip prey. They are strong swimmers, paddling with their forefeet only and trailing their hind feet which act as a rudder. They can stay submerged for over one minute, keeping their eyes open. They swim at a speed of approximately 6.4 km/h, often covering long distances.

Insulation. Polar bears have a thick layer of sub-cutaneous fat and very dense underfur with several layers of glossy guard hair on the outside. Their pelt is much thicker in winter and provides excellent insulation. The fat layer also adds to buoyancy in the water. Water is shed easily from the oily waterproof fur. Small, furry ears have a heavy network of blood vessels, keeping them warm and conserving heat. The tail is short and rounded also conserving heat. Fur is very dense around the soles of the feet.

Pelage. The creamy white appearance of the coat allows the bear to be inconspicuous when hunting seal. Each hair is similar to an optical fibre; colourless and hollow. Being translucent, it reflects the heat from the sun down to the base of the hair, where it is absorbed by the black skin. Whiteness comes from reflection of light rather than pigmentation.

Hunting. Bears use their keen sense of smell to detect seal breathing holes. These can be up to a kilometer away and covered by a layer of snow and ice. They will stand or lie by the seal’s blowhole in the ice for hours; they may swim towards seals resting on the ice flows with only their nose showing above the water. They will dive quietly, then swim up to the ice edge and jump out on the seal, and will also crawl towards a sunbathing seal using every piece of raised ice to conceal the approach.

Denning. Both sexes occupy dens for shelter. Topographic factors influence the den sites. In Canadian core areas, dens frequently occur on south-facing slopes where northerly prevailing winds create the best drifts, where the wind-chill is least and insulation from received solar radiation is greatest. One of the three largest denning areas worldwide is in Canada. There are three main types of winter refuges: maternity dens, temporary dens and winter shelters. During the winter any bear may dig a temporary den and use it for a few days during a storm, or take shelter in a natural cavity. Winter shelters are used for longer periods of time as resting places. This type of shelter is usually roomier with additional features such as alcoves, porches and ventilation holes. Bears do not hibernate in the strict sense of the word; they have the ability to slow down their metabolism to conserve energy at any time of year. The state of self-induced lethargy while in the shelter allows them to preserve their vital fat reserves. During this time, the body temperature of the polar bear decreases by a few degrees from normal and the respiration rates are markedly reduced. Maternity dens are built and occupied by pregnant females and can vary in size. The denning chamber is at the upper end of an entrance tunnel 1 to 2 m long. It averages 1.5 m in diameter with a height of 90 to 100cm in the middle. Drifting snow seals the entrance. The chamber is higher than the tunnel, trapping bear body heat inside. Dens not only provide a safe place to give birth to her cubs, but are also a place of protection for the cubs during their first few months. During this time she does not leave the den, remaining with her cubs and living on her reserves of fat. In the spring, with her fat severely depleted she must leave to find food to sustain herself and her cubs. After they leave the maternity den she will build temporary refuges in which to nurse, rest and shelter her young cubs and warms them as they all sleep together. She heads with her cubs towards the nearest supply of food, usually towards pack ice.

Sight and sounds. Polar bears have good eyesight. Their eyes have inner eyelids that keep the glare of the sun on snow and ice from blinding them. When defending a food source from other bears they use a deep growl. They hiss and snort to show aggression. Angry bears use loud roars and growls. Mothers scold cubs with a low growl.

Polar bears are one of the animals most threatened by global warming. They depend entirely on sea ice as a platform from which to hunt seals. Reduction of the total ice cover in the Arctic is a serious concern globally. When the ice does not form or forms too late in the season many polar bears starve. In Hudson Bay, scientists have found the main cause of death for cubs to be either lack of food or lack of fat on nursing mothers. Exploitation of minerals and fossil fuels in the Arctic pose a continuous threat. Of the oil and natural gas deposits globally, 20% are located in the Arctic. As the ice cap recedes these become more accessible. Countries are competing which each other in claiming ownership of Arctic and its resources. This can only result in further and more drastic impact on polar bear habitat.