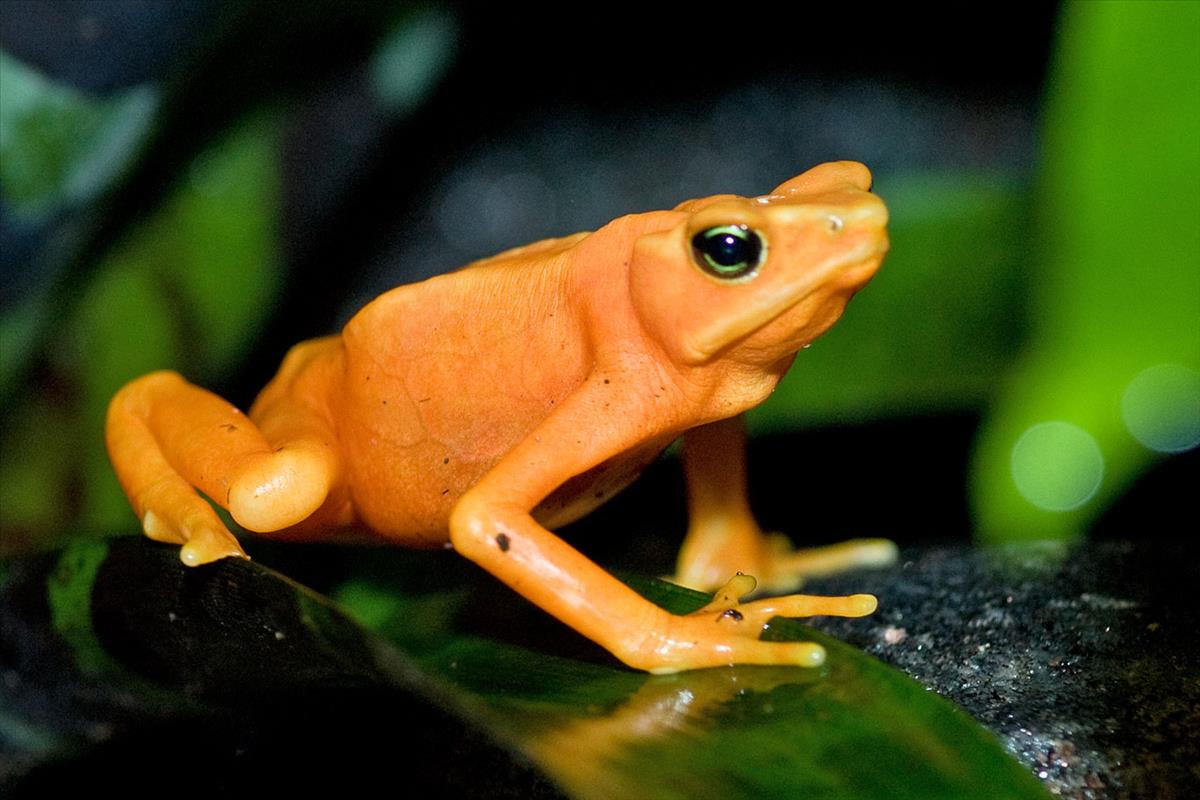 Atelopus zeteki, the Panamanian golden frog, is a small, brightly-coloured frog. Wet forest males and females are larger than those that live in dry forest habitats. The head is longer than broad, with a pointed, protuberant snout. The pupil is horizontally elliptical. There is no tympanum, but the inner ears are well-developed. The body is slim with long limbs, and the upper surface is smooth. The fingers are elongate and narrow. The toes are extensively webbed. Males also have a well-developed brownish nuptial pad on the upper and inner surface of the first finger.

The sexes have similar coloration-usually uniform golden yellow with one to several large black dorsal markings. They have yellow abdomens.

This species undergoes a change in color as they age. Juveniles are green and black. As they mature, they gradually gain the adults’ yellow colouration. Adult males measure 35-48 mm and weigh 3-5 g; adult females measure 45-63 mm and weigh 4-7 g.

This species is native to western and central Panama. They live at higher elevations-from 330 up to 1,300 m above sea level.

It is a terrestrial species of tropical wet-or dry montane forest, with breeding and larval development taking place in forest streams.

Males grasp the females (amplexus) and release their sperm as the female discharges her eggs (ovipositioning). The females lay their eggs early in the dry season, along the margins of quick flowing streams. The egg string is usually attached to bedrock, or to larger boulders. They can lay from 200 to 600 eggs. The tadpoles emerge in seven to ten days. This species might practice communal oviposition-the females lay their eggs in close proximity to one another. This may occur in Atelopus zeteki in order to distribute the risk of predation, or because there is a lack of suitable oviposition sites.

Although known as a frog, Atelopus zeteki is classified as a true toad (Bufonidae). True toads are toothless and generally warty in appearance and have a pair of poison producing glands on the backs of their heads. Atelopus zeteki is the most toxic species of Atelopus. Additionally, most toads lay eggs in strings. Male calls can be loud but due to the noise created by the fast-moving streams which form their natural habitat, it can make hearing difficult. To compensate for this disadvantage these frogs also use a type of semaphore (an optical form of communication). They “wave” limbs at rivals and prospective mates.

The change in color as they age from juveniles to adults may be related to the acquisition of skin toxicity. As they grow and develop the ability to produce their toxin, their colour changes. The young appear to be secretive, unlike the adults which move about openly.

In recent years, populations have been declining catastrophically due to chytridiomycosis (an infectious disease caused by a fungus). The chytridiomycosis epidemic is spreading from west to east through Panama, and populations in the eastern part of its range are now at severe risk of disappearing. In fact, Atelopus zeteki might already be extinct in the wild, with the population remnants having been removed to captive breeding facilities. A successful captive-breeding programme involving many zoos in Panama and North America is in place, although no re-introductions will be made until existing threats can be addressed.

Among others, these other threats include: collection for local zoos and hotels; illegal pet trading; deforestation, and habitat alteration by logging and farming related activities (use of pesticides, fertilizers, etc.).