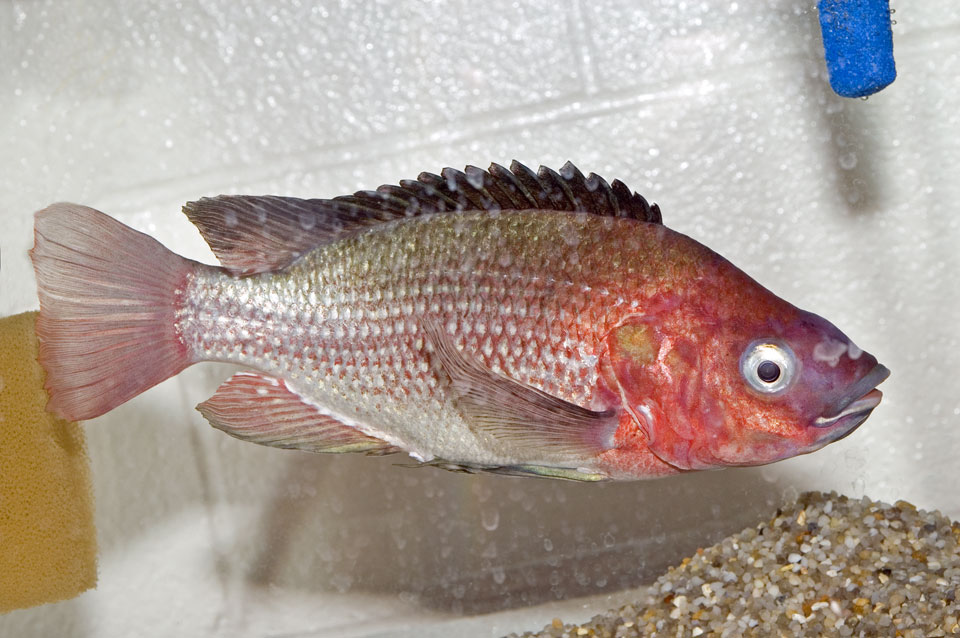 The general colour of the female and non-breeding male is olive brown to watery green on the dorsal side (top), and cream or silvery white on the ventral side (below). The male breeding colouration is a general reddish colour with black markings on the ventral side and black dorsal fin.
Maximum size is 37 cm.

Plankton-feeders (i.e. feed on microscopic plants and animals found floating in the water). These fish filter food particles out of the water with specialized gill rakers.

In a given environment, the sexes grow at the same rate and mature at the same size. They are full-grown at about 10 years of age. Breeding begins as early as five months, and takes place throughout the year. Males create nests by digging circular pits about 30 cm in diameter, which will serve as the focal point of the reproductive ritual. Males defend the nests for a period of a week or more while displaying their full breeding colours to attract females to spawn. The maximum number of eggs produced increases with the size of the female, ranging from 300 to 1700 eggs.

Oreochromis esculentus have evolved specialized teeth, mouth structures and internal organs to utilize specific foods for their survival. They also exhibit mouth-brooding behaviour (i.e. eggs are carried in the mouth of the mother where they undergo a gestation period of about 14 to 21 days). During this period the mother refrains from eating and releases the young when they have hatched. The mother will continue to provide her mouth as safe haven for the free swimming young whenever they are exposed to danger.

Humans; through overfishing, habitat alteration, and the introduction of alien fish species such as the Nile perch (Lates niloticus). The Nile perch was introduced by British colonists in the 1950's to boost the sport fishery in Lake Victoria. As a huge predator, the Nile perch feeds on the native fish species including Oreochromis esculentus. Native fish flocks had for centuries been the main protein source for locals and could be preserved by drying in the sun. When the Nile perch were introduced, the cichlids had to seek safety in deeper waters. The Nile perch soon replaced the cichlids as the main catch for fisherman, but were too large and oily to be sun-dried. As a result, people began to cut down trees along the shoreline in order to smoke the perch, creating problems that accompany deforestation, such as excessive soil erosion.

Oreochromis esculentus, now extinct in its native habitat of Lake Victoria, has become a token of the imperilled endemic flocks of fishes that have sustained a balance in the complex web of the lake over thousands of years. Oreochromis esculentus is part of the first Species Survival Program for fish, organized by North American zoos and aquariums. The cooperative breeding program will assist the African nations with preserving this important genetic resource.