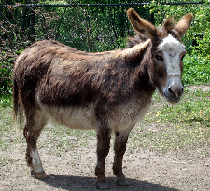 Miniature donkeys have been bred carefully over many generations for size, disposition, and conformation. Size is the defining breed trait, with the height not exceeding 92 cm. They weigh less than 180 kg.

Equus asinus resemble horses and are characterized by their large head, long ears and cow-like tail. Colours can vary from black, white, paint, and all shades of brown and grey; however the most common is a grey colour (called dun grey). Some are spotted, speckled or striped. Most are a solid colour. They have a dark dorsal stripe from mane to tail and a dark stripe across their shoulders. They have an erect mane and lack the forelock of a horse. The hair can be straight, curly, short and wiry, or long and woolly. There is generally very little sexual dimorphism.

The Nubian and Somalian subspecies of African wild ass are the ancestors of the modern donkey. Miniature donkeys were originally developed on the islands of Sardinia and Sicily in the Mediterranean. They are now distributed throughout the world.

True wild E. asinus originated in the hilly, undulating deserts of northern Africa and the Arabian peninsula and are well-adapted for life in the desert. Domestic E. asinus prefer warm, dry climates and, if left to become feral, they will return to such a habitat, like the feral E. asinus of Death Valley National Park in California.

Grazers. Donkeys are very efficient at breaking down near-inedible vegetation and extracting moisture from it. As a result, and due to their small size, they do not require a large amount of grass, which has allowed them to easily adapt to the small amount of fresh grasses available in their very dry natural range.

Feral and free-ranging E. asinus have a territorial social system. The composition and degree of stability of territorial groups varies with particular populations. In some populations, each breeding male (jack) holds his own territory through which solitary females with their young pass. Females (jennies) in estrus are bred by the breeding male holding a particular territory. Populations have been identified in which jennies tend to stay within particular territories and have a more stable affiliation with the breeding male and the other jennies in the territory, in a semi-harem type territorial breeding group. In some populations, there are groups in which subordinate males are allowed to breed some of the jennies within the territory of a dominant male, usually following mating by the dominant male. Territorial boundaries appear to be announced acoustically and in some instances marked with fecal piles.

Miniature donkeys have a gestation period of 11 to 13 months and are sexually mature from the age of around one year. They give birth to a single foal each year. Having no natural predator, competitor or common diseases, most young E. asinus reach maturity and may live as long as 25 years in the wild.

Miniature donkeys were originally bred for their small size to fit on narrow, winding roads through hills and mountains. Their long narrow hooves make them surefooted rather than fast runners. Donkeys are grazing herbivores, with large, flat-surfaced teeth adapted for tearing and chewing plant matter. Their primary food is grass, but they also eat other shrubs and desert plants. Like many other grazing animals, they grasp the plant first with their muscular lips, pull it into their mouth, and then tear it off with their teeth. In a study of feral E. asinus in Arizona, they were found to eat 33% forbs and 40% browse.

Donkeys have many traits that are unique to this species. One of these is their vocalizations. Because wild donkeys do not live in herds like wild horses do, they have developed very loud vocalizations, which help them keep in contact with each other over great distances. Donkeys ears are larger than those of horses and these large, long ears are able to pick up distant sounds. Their best-known vocalization is called a "bray", which can be heard for over three kilometers.

Donkeys in the wild can defend themselves with a powerful kick of their hind legs, as well as by biting and striking with their front hooves.

Pure-bred miniature donkeys in the Mediterranean area are rapidly disappearing, as the small donkeys are being mixed with larger breeds. They are becoming increasingly rare in their native Sicily and Sardinia. They have not been assigned endangered status.