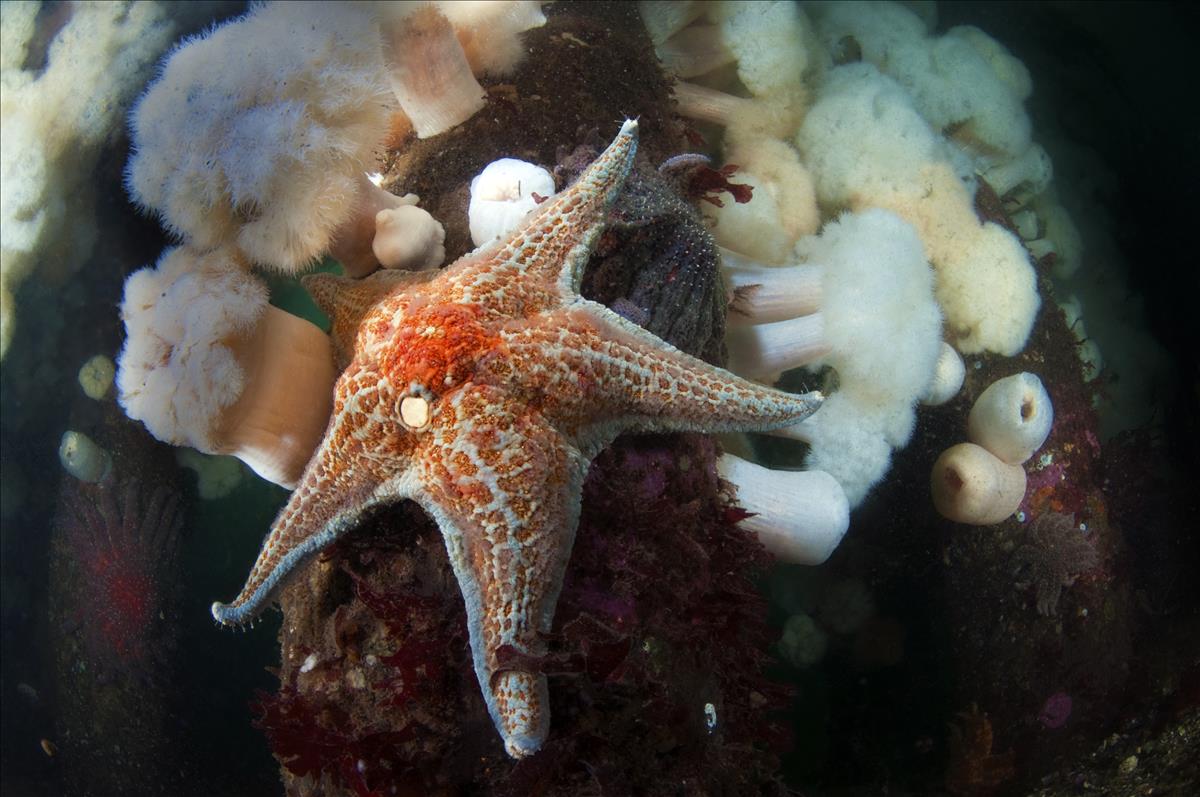 The leather sea star has a smooth and slimy skin. It is a mottled reddish-brown and orange. The gill areas are rusty brown and the outside edge is a greenish-grey colour. Five arms taper broadly towards the extensive central disk, and can reach up to 15 cm in length. Four rows of tube feet are located on its underside, which is used in locomotion. It has a very distinct smell similar to that of garlic.

Pacific coast of North America from Alaska to southern California. In Canada, they are common along the coast of British Columbia.

Leather stars are found from the intertidal zone to depths of over 90 metres.

The diet of the leather star varies depending on its location. When found in areas exposed due to tides, it mostly eats sea anemones and sea squirts. When it is found in sheltered areas, the leather star feeds on sea cucumbers, sea pens, and sponges. Some leather stars scavenge on the bottom of the ocean. Leather stars have sensors at the end of each of their arms which detect prey. However, some anemones are adapted to sense a chemical produced by the leather star and are able to detach and float away before being eaten. When a leather star encounters food which is sedentary, it will protrude its stomach out through its mouth and use enzymes from its stomach to breakdown the food into a liquefied form. After digesting its prey, the leather star will pull its stomach back into its body.

The leather star reproduces through external fertilization. The female sheds her eggs into the water to be fertilized by the male’s sperm which are also discharged into the water. The tiny eggs are yellow to orange in colour. The embryos are carried away by currents.

Sea stars have adapted to reproduce asexually. They have the ability to regenerate. If a limb is lost, they can grow a new arm. One sea star can be cut and two and each side will regenerate a new half.

Leather stars are preyed upon by sea gulls and sea otters. Sea otters tend to only eat a part of the Leather star, which allows the remainder of the sea star the chance to regenerate. In some areas, habitat destruction has lead to a decrease in sea star populations.