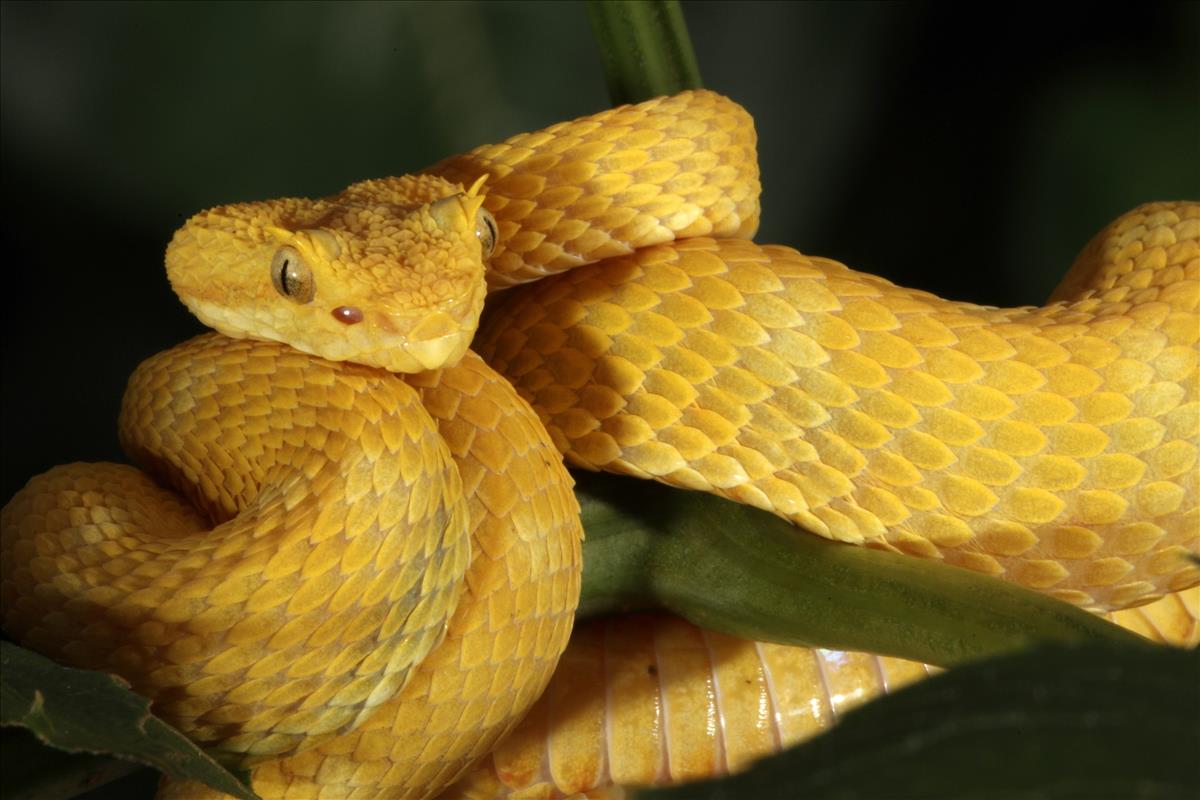 The Eyelash Viper is a relatively small, slender to chunky snake 50 to 80 cm in length. The head is wide and triangular shaped. Their most distinguishing feature is the supraciliare, or enlarged scale, above each eye, giving the appearance of “eyelashes”. The pupils are vertical and long.

Colouration is varied. It is often mottled green but can be reddish-yellow, yellow or grayish brown. The yellow colour can be spotted with white, black or red dots. They often have black or brown speckling in the base colour. Females are usually larger than males.

Neotropical: Southern Mexico throughout Central America and into northern Venezuela, Columbia and Ecuador.

Wet forest, cloud forest and tropical moist forest with mid to low elevations. Shrubs, bushes, vine tangles, trees, and palms usually close to a water source. It moves readily between the ground and canopy. It is often found in banana groves.

Small mammals such as bats and mouse opossums as well as birds, lizards and frogs.

Vipers use their sense of smell to find mates; the tongue can pick up a female’s chemical trail. Males compete for females. They face off against each other with the head and forepart of the body held erect while trying to push each other to the ground. The successful male impregnates the female. They are ovoviviparous (females retain the fertilized eggs within their body). Each developing baby snake is contained within a fibrous membrane and is nourished by surrounding yolk. They either hatch out of the membrane while still inside the snake or they hatch just after the eggs are laid. Clutch size is usually 12 to 20 and may contain young of several different colour morphs. Neonates are about 15 to 18 cm long and are fairly well developed, already capable of delivering a bite. These newborns have white tips on their tails. Caudal luring, a tail wiggling technique attracts potential prey to move within striking distance. They are ambush predators from birth. Young snakes stay with the mother for about two weeks until their first molt.

It is primarily nocturnal with the ability to detect prey by using heat sensitive pits on either side of the head located between the eye and nostril. This is like having a “sixth” sense in detecting prey whose body temperatures are higher or lower than the surrounding environment. It is well camouflaged by flowers and foliage and lays in wait for unsuspecting prey to wander by. The “eyelashes” on this viper help in making it difficult to distinguish its head from the surrounding foliage. This arboreal snake has a prehensile tail. While catching and eating food, it can hold onto a branch with its tail and can hang completely suspended in midair while eating its entire meal. They are venomous and the venom has neurotoxic and haemostatic properties. Their teeth are large, hypodermic needle-like fangs in the upper jaw fold back when not in use. It is not considered an especially dangerous viper. It is not very aggressive and bites are not common and rarely fatal.

They are preyed upon by a wide variety of animals including large raptors, mammals and other snakes. All rainforests and their inhabitants are under constant threat.