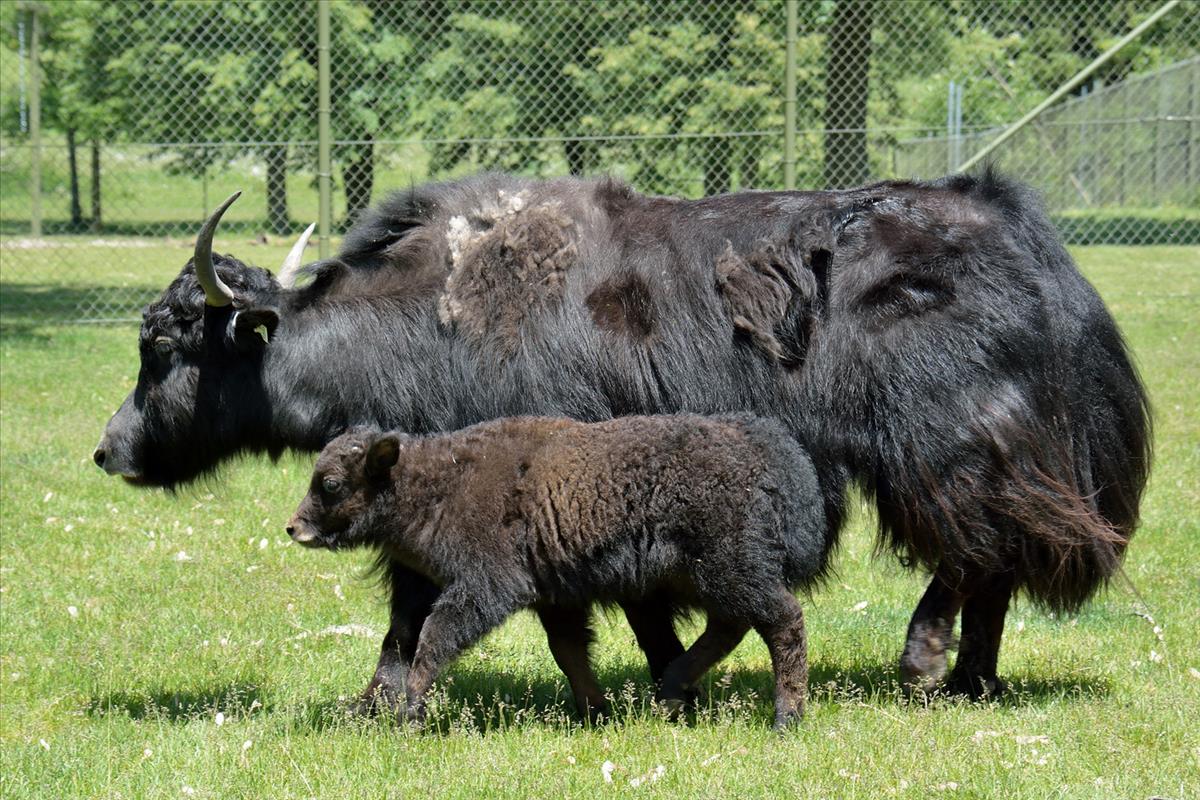 Yaks are heavily built animals with a sturdy frame. They have humped shoulders, short legs, and rounded hooves. The forehead is wide and the ears are small. Both sexes have horns. In males, the horns sweep out from the sides of the head, and then curve forward with an upward tilt; they typically range from 48 to 99 cm in length. The horns of females are smaller, only 27 to 64 cm in length, and have a more upright shape.

Hair is thick, long, and shaggy, with a dense woolly undercoat over the chest, flanks, and thighs. The guard hairs are short on the back and much longer along the sides, forming a fringed cape or skirt that reaches almost to the ground and is more pronounced in males. The tail is long and very bushy, also with long guard hairs covering much of its length.

Wild yaks are black in colour with rusty-brown tints, while domestic yaks vary greatly in colour from black to light yellow-brown, with many individuals having mottled white patches over parts of their sides and back. Wild yaks are bigger than domestic yaks and have bigger horns. Males are larger than females.
Wild Domestic
Height at shoulder: 2.0 m 1.6 m
Weight: up to 1000 kg up to 800 kg
Horns: up to 90 cm slightly shorter

Yaks have been domesticated in Tibet for centuries, and the domestic form has been introduced into other parts of central Asia. It now has a much wider distribution than the wild original form. It extends from the southern slopes of the Himalayas to the Altai and west to east from the Pamir to the Minshan mountains. In relatively recent times, the area of distribution has further extended to, for example, the Caucasus and North America.

The wild yak was once numerous and widespread on the entire Tibetan plateau to the north of the Himalayas, but it is now very restricted in distribution and is found only in remote areas of northern Xizang Province (Tibet) and western Qinghai Province of China, where there is little human disturbance.

The wild yak inhabits the alpine tundra at altitudes of 5000 to 7000 m, while the domestic yak can survive in much lower altitudes. The habitat can vary, consisting of three areas with different vegetation: Alpine meadow, alpine steppe, and desert steppe. Each habitat features large areas of grassland, but differ in the type of grasses/small shrubs, amount of vegetation, average temperature, and precipitation. Habitat can also be dependent on the season. Some herds will migrate large distances seasonally to feed on grass, moss, and lichens. However, they prefer the colder temperatures of the mountain plateaus.

Herbivorous. Yaks are grazers, with a diet composed mainly of various low-lying grasses and grass-like plants, including shrubs, forbs, cushion plants etc., found on the Tibetan plateau, though they will also consume lichen, mosses, and forbs. They drink frequently during the summer and eat snow in winter.

Yaks mate in the summer, typically between July and September, depending on the local environment. For the remainder of the year, many males wander in small bachelor groups away from the large herds, but, as the rut approaches, they become aggressive and regularly fight amongst each other to establish dominance. In addition to non-violent threat displays, bellowing, and scraping the ground with their horns, male yaks also compete more directly, repeatedly charging at each other with heads lowered or sparring with their horns.

Females enter oestrus up to four times a year, and females are receptive only for a few hours in each 20 day cycle. Gestation lasts between 257 and 270 days. The young are born between May and June. A single calf is usual. The female finds a secluded spot to give birth. The calf is able to walk within about ten minutes of birth, and the pair soon rejoins the herd. Females of both the wild and domestic forms typically give birth only once every other year, although more frequent births are possible if the food supply is good.

Calves are weaned at one year and become independent shortly thereafter. Wild calves are initially brown in colour, and only later develop the darker adult hair. Females generally give birth for the first time at three or four years of age, and reach their peak reproductive fitness at around six years. Domestic yaks may live for more than twenty years although it is likely that this may be somewhat shorter for wild yaks.

The domestic yak is very important to the nomadic tribes of the region because of its ability to withstand very low temperatures and because it is so surefooted on the steep mountain trails. They can negotiate steep mountain cliffs quite easily. Yaks are used as beasts of burden, for riding, and for milking. They can carry loads of 150 kg or more on the steepest mountain paths.

Yak milk is highly nutritious with a content of 7 - 8% fat. Their meat is excellent, although only old yaks are slaughtered. Yaks are sheared once a year and the wool is spun into yarn and used in blankets, tent covers, bags, and ropes etc. Clothes are made from the soft wool of the young animals. Yak's manure is often the only fuel in the highlands of Tibet where, because of the high altitude, there are no trees or brush.

They graze in the early morning and evening and sleep during the rest of the day. They do not move about very much. They may spend days in the same pasture, alternately grazing and lying down to ruminate. During severe blizzards the yak turns it broad bushy tail into the storm and remains motionless for hours.

In contrast from the wild form, the domestic yak makes frequent grunting noises and is therefore called the "grunting ox". Wild yaks will attack the domestic variety. Like bison, but unlike cattle, males wallow in dry soil during the rut, often while scent-marking with urine or dung. The udder in females, and the scrotum in males are small and hairy, as protection against the cold.

Wild yaks have to compete with the domestic yak for grazing and are driven into the highest and most inaccessible places of the mountains. They are now protected in China, but their numbers are still declining.