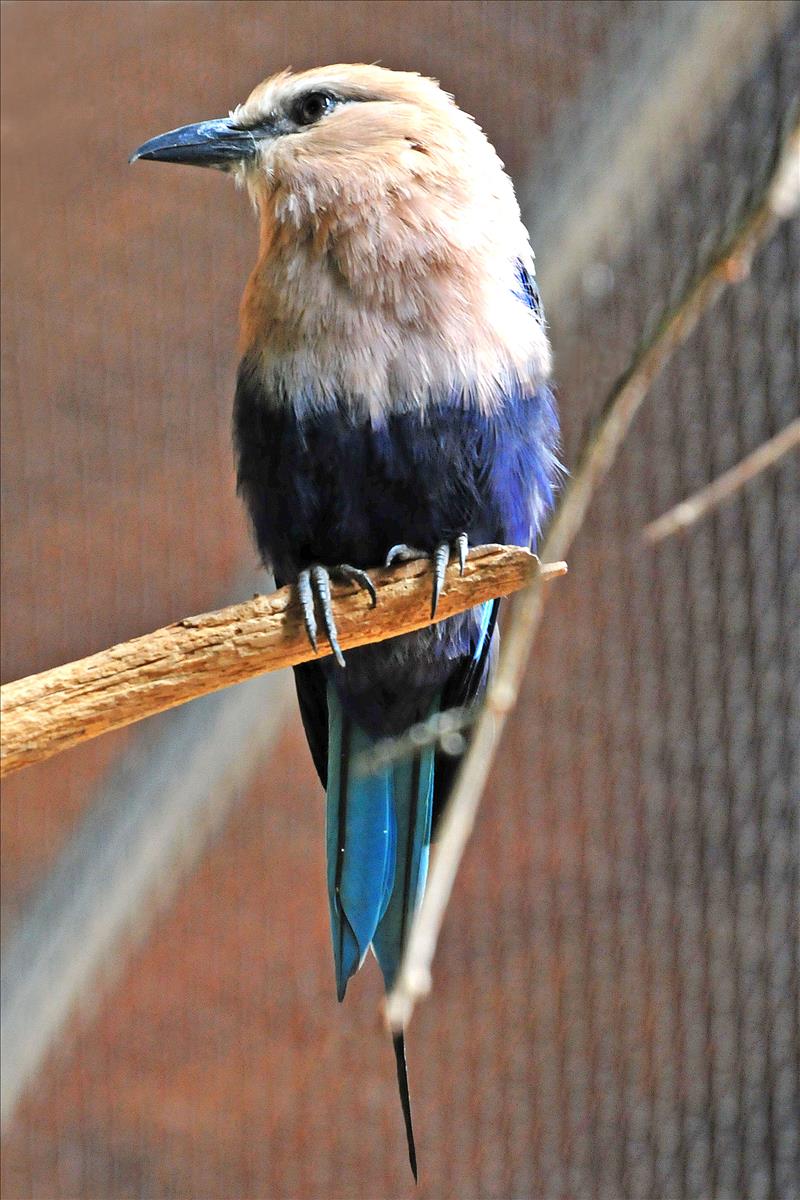 Not many birds have tail streamers. But even without them, the blue-bellied roller is impressive in flight with the vivid blues of its wings, belly and tail contrasting with a white upper body. Perched, it resembles a crow with its stocky build and large beak. In fact, the Latin word coracium means "like a raven".

When unfolded, the wings fully show off their deep blue, with a broad azure stripe (two to three cm wide) running across the base of the primaries and secondaries. The underwing shares azure with blue-black on the distal halves of all flight feathers. Both the top and bottom of its forked tail are azure. The outer tail feathers elongate into shortish streamers. The belly, flanks and undertail coverts are a dark ultramarine blue.

In contrast, buffy white covers the head, neck, breast and upper mantle. The lower mantle, scapulars and tertials are dark brown glossed with green. Eyes are dark brown, with black lores in front and a black mark behind. The crowlike bill is also black. Legs and feet are a dark olive green. The juvenile is a drabber version of the adult but without the tail streamers.

Coriacas cyanogaster resides in humid or semi-humid areas where trees are naturally present. They prefer undisturbed savanna woodlands dominated by Isoberlinia trees. Less frequently, they’ll be found on plantations, burnt clearings in rainforest or near moist grasslands and marshes – places with plenty of branches above clearings. They hunt best when the ground is bare or has low, sparse vegetation. Seldom found much above sea level.

The blue-bellied roller is a carnivore that feeds on just about any invertebrate it finds on the ground. In one Côte d’Ivoire survey of their stomach contents, their preferences were found to be: 30% grasshoppers, 28% beetles and 16% termites and ants. Other snacks they like are wasps, mantises, antlion larvae (known as doodlebugs in North America), millipedes, and earthworms. They will even eat noxious insects with indicative colouration. Occasionally they will catch a small skink or snake. Unlike other rollers, this one will eat some vegetation, specifically the palm-oil nut.

The breeding season starts as the dry season ends. Fast chases indicate that courtship has begun. The chasing bird will break away and speed downwards, tumbling, calling raucously, and rolling its body from side to side. This is why the family is called rollers.
The nest is built about ten metres up a small tree or in a palm-tree cavity. Two to three eggs will be laid, though at higher latitudes it could be up to six. Both parents incubate for about three weeks though the female sits the most. Born altricial, the hatchlings take four weeks to fledge. During this time, juveniles from previous broods will assist with feeding. Food is regurgitated.

Blue-bellied rollers spend most of their time in trees above clearings. Their lookout point is usually a branch eight metres or higher though they will also will hunt from a fence, lamppost or building beside an open area. To save energy, they patiently wait for the right opportunity. Then they swoop down onto their ground-bound prey. Returning to their perch to dine, they sometimes batter their meal before swallowing it. They don’t hunt communally as large prey is hard to find and to be kept for oneself.

For a bird that finds its sustenance mainly on the ground, they have relatively weak feet and legs. If need be, since they can’t walk or hop very well, they’ll make a lurching leap at prey. They don’t use their keen eyesight just to spot prey below them, if there's a fire, termite hatch or locust swarm in the distance, the blue-bellied roller will be among the first there for a feed. They appear to fly leisurely though they move quickly and directly with rapid, shallow wing beats.

Blue-bellied rollers also keep an eye out for intruders into their territory. While on patrol, they display their brilliant plumage. If that doesn’t stop an intruder, they will make rolling dives while calling shrilly to scare others away. During nesting, they are particularly aggressive. They show no fear no matter the size of a potential predator.

Blue-bellied rollers will stay together most of the day in groups of two, three or four, spending most of their time feeding and calling. They often roost in larger groups of up to twelve. However, by nature, they are irritable and aggressive. These traits evolved before the spread of agriculture when clearings would have been fewer, meaning competition for hunting trees would have been greater. They had to have ways to express hostility without resorting to fighting, which might be devastating with their powerful beaks. A complex system of postures and movements to communicate social information developed. For example, ruffling of the neck feathers often precedes an advance on the other bird. Staring often induces the other bird to retreat. Pecking the ground may be redirected attack. An erect posture with the crown high and the bill pointing groundward shows extreme aggression. Pseudosexual and reverse copulation threatens other birds in the area as well as being an outlet for aggression. These behaviors and others evolved to prevent bloodshed amongst blue-bellied rollers.

As a bird that prefers moist woodlands, the continued devastation of forests in West Africa for agriculture is the major threat. The caged-bird trade is not considered a threat at this time.