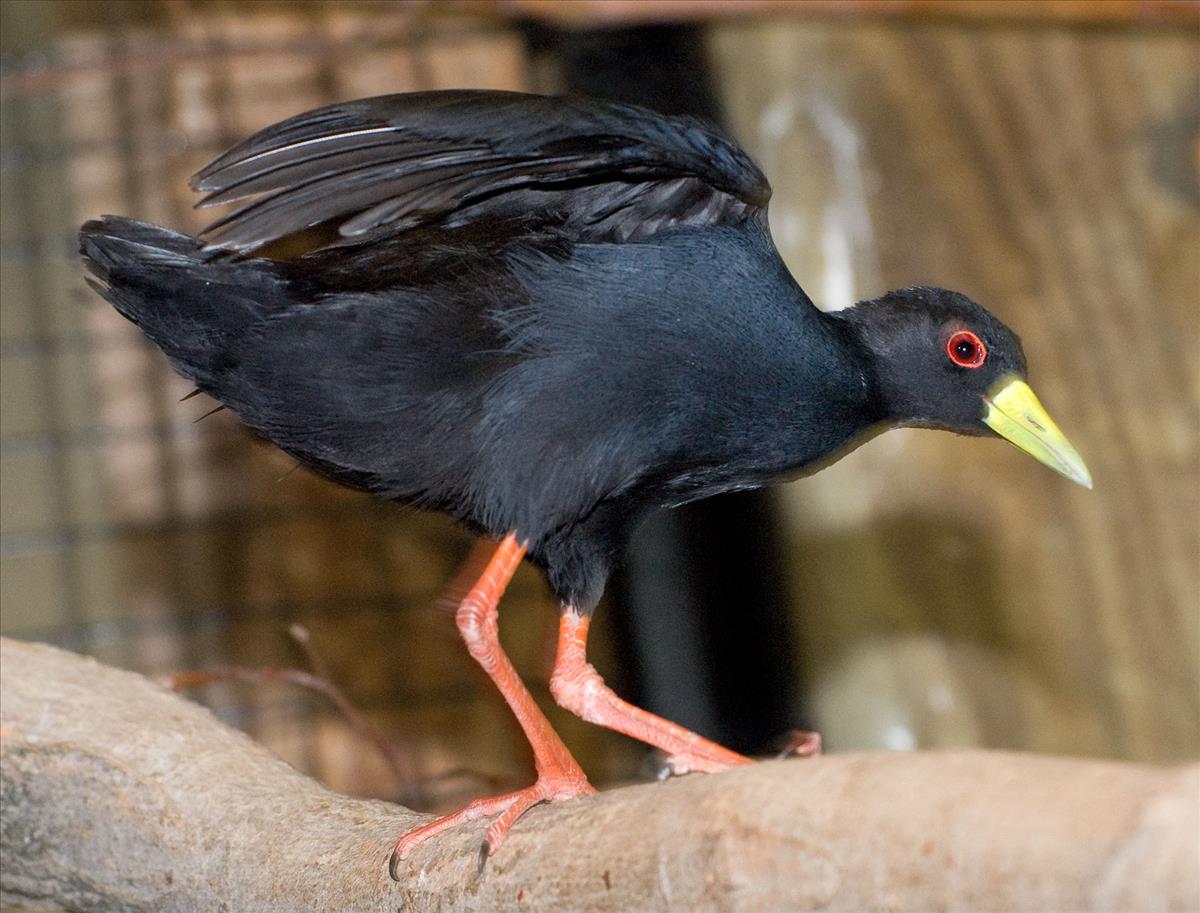 The adult black crake has mainly black plumage with a brown, olive tone on the wings and upperparts. In the wild, it appears slate-black. The bill is bright yellow and the eyes are red. The legs and feet are bright red, but duller when not breeding. Adults are typically 19 - 23 cm long with the males only slightly larger. Otherwise the sexes are similar. The immature bird is a dull brown with dark greenish bill and dull red legs and feet. The black crake has short, rounded, broad wings. When flying over short distances, it has low, weak flight with dangling legs.

They have an extremely large range in sub-Saharan Africa. It is absent from the desert regions of NE and SW Africa.

The black crake frequents several types of freshwater habitats but prefers the dense undergrowth of the wet clearings in wooded areas, and the grassy marshes in open areas. Suitable habitats include flowing and still inland freshwaters such as lakes, ponds, reservoirs, seasonal pans, and temporary flooded areas along rivers; preferably fringed by rank grass, sedges, reed beds, papyrus, swampy thickets, bushes, or other vegetation. In more open areas it may inhabit broad, grassy marshes. It requires tangled vegetation where it can take cover, roost and nest. This bird may undertake some seasonal movements in those parts of its range which are subject to drought.

It eats a wide range of aquatic invertebrates such as crustaceans, worms, and insects, as well as small fish, tadpoles, and frogs. It takes food from the ground, the water and the vegetation, i.e. water plant parts and seeds. It also will take the eggs and nestlings of other species such as weavers and herons. This species will even scavenge on small carcasses and perch on hippopotamuses and warthogs to find and eat parasites.

Breeds throughout the year when conditions are suitable, with peaks during or following periods of rain. This bird establishes its own breeding territory and becomes very aggressive with other rails’ species during the breeding season. Courtship behavior includes feeding and mutual preening, displays of bowing, and wing movements. It is more vocal during the breeding season. The black crake typically nests in vegetation over water however; it may nest on the ground, floating on the water or even in bushes up to three meters above the ground.

The nest is a deep bowl in which the female lays three brown-spotted, white eggs. Both parents incubate for 13 - 19 days with the chicks leaving the nest within three days of hatching. They are fed by the parents until they can fly and become independent at about six weeks. The young remain within the family group until the next breeding season.

The main call is a duet starting with a repeated “krrok-krrraa”, whereas the other bird responds with a soft cooing “coo-crr-COO”. Sometimes other family members join in, crouched in a circle while calling in duets, getting increasingly louder. The alarm call is a sharp “chip”. Contact calls are a softer “pruk” or “bup”.

This bird has a specially adapted bill which helps it hunt for fish, crabs, shrimp, and other aquatic animals in the water. Because of its long toes, the black crake is able to walk on floating vegetation. It has become widespread within its’ African range by adapting to artificial wetlands and temporary habitats.

The only regional threat to the black crake is confined to Nigeria and Malawi where it is hunted for use in traditional medicine and local consumption. As with any wetlands dependant species, water contamination can be a threat in areas close to agricultural development. Eggs and nestlings are predated by various mammals, reptiles, and other birds.