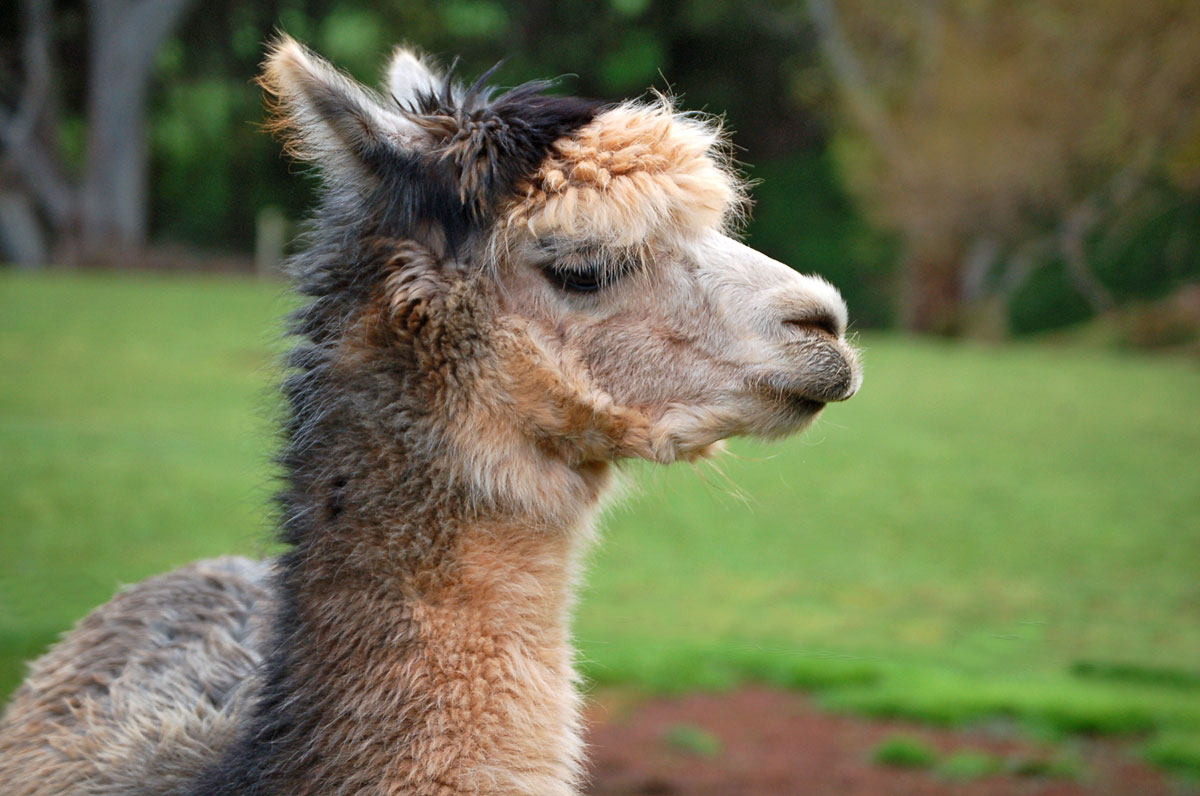 Alpacas are New World camelids, related to camels. They are domestic descendants of wild vicuna (the llama is a domestic descendant of the wild guanaco). Alpacas have long, slender legs - the front and back legs on the same side move forward together in a rocking motion known as pacing. Alpacas have no hump as camels do. They have small heads, long, thin necks and a prehensile split upper lip. Their large eyes are expressive and make these animals appear curious and inquisitive.

The alpaca bears its weight on a fatty pad which cushions the underside of the two toes on each foot. Toenails protect the top and sides of the toes. The alpaca is about one and a half metres tall, with a tail measuring 20 to 25 cm, and weighs between 40 and 60 kg. Alpacas have straight ears - llamas have banana-shaped ears, and are generally larger than alpacas. Their fur has over 20 natural colours from a pale almost white to the darkest black.

Now a domesticated animal, they are descended from vicuna which inhabited the high Andes of South America. They are found in high mountain plateaus in Peru, Chile and Bolivia.

Alpaca are herbivores, grazing on a selection of perennial grasses, trees and shrubs. They are modified ruminants, processing their food through a three-stomach system.

Alpacas are social herd animals, living in family groups of a territorial male, females and young. Bachelor herds contain those males without a harem. Dominance over the females is decided by fights between males where they may bite, neck wrestle, and push each other. These fights are accompanied by screaming. Females are induced ovulators - the act of mating and the presence of semen causes them to ovulate. This means that they can breed at any time of the year. Artificial insemination is not often successful.

Females are mature between one and two years of age and males between one and three years. After a pregnancy of 11 ½ months, one baby is generally born. A baby alpaca is called a cria. A young alpaca will nurse from its mother for about six months before being weaned. Then the young are called tuis until they reach maturity. The female can be ready to breed again in about two weeks after giving birth. Alpacas can live up to 20 or more years.

Alpacas are pseudoruminant herbivores, using their three stomachs to get all the nutrients possible from their grass diet. They are herd animals and can become stressed if left on their own. They are not naturally nomadic, marking their territory with communal dung piles.

The long neck of an alpaca enables it to see longer distances, so it is able to spot a predator (mountain lions, coyotes, bears, or other carnivores) and get to safety. A special high pitched braying sound is a warning for the herd that there may be danger nearby. Small predators may be fought off with kicks and the alpaca's pointed toe nails can inflicts wounds. As can camels, alpacas can spit when they are upset or unhappy about something, but this does not happen often. The spit is a combination of saliva, air and acidic stomach contents.

An alpaca has oval red blood cells - this shape makes it easier for the cells to be transported throughout the body if the animal’s blood has been thickened due to dehydration. The thick coat provides insulation keeping the animals warm in higher altitudes or cold weather. Alpacas have adapted to living with people and are farmed for their fibre in many places all over the world. Because they are timid and gentle and also curious, alpaca are easily trained.Alpacas communicate with each other through a variety of noises, from humming and clicking to whining and barking sounds.

This species has been domesticated - there are no known wild alpacas.