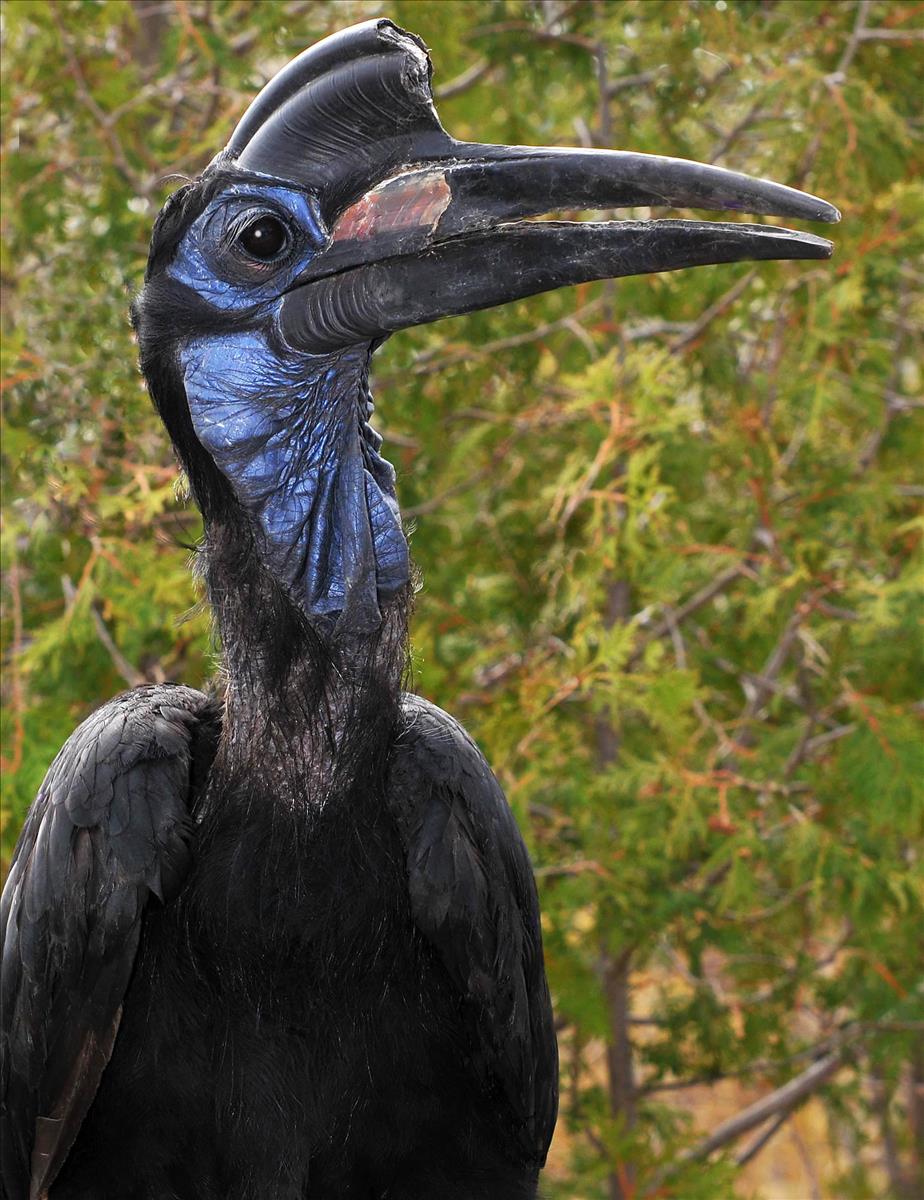 These are one of two species of ground-dwelling hornbills. These are the largest of the hornbills. They stand just over one metre in height, weigh between three and four kg and have wing spans up to two metres across. Females are slightly smaller than males. Their feathers are primarily black, although they have striking white primary feathers which are revealed when the bird flies. The large, downward-curved bill is black, with a patch of yellow/orange colouring at the base of the upper mandible, and this hornbill sports an open casque on the uppermost section of the top mandible.

Their bare legs and feet are black, and their brown eyes are adorned with long black eyelashes. Both male and female have blue skin around the eye. Both sexes have throat pouches, called wattles, on their necks: the female's is blue but the male's turns red. The two ground hornbill species are very similar in appearance, but B. abyssinicus is distinguished from B. leadbeateri by a higher casque with three lobes and a large yellow patch at its base.

These birds live in sub-Saharan Africa in areas just north of the equator, including Sudan, Ethiopia, Kenya, and Uganda, on the edge of the Sahara Desert.

Abyssian ground hornbills are primarily carnivorous, consuming small organisms such as tortoises, lizards, amphibians, mammals, other birds, and insects (although they may supplement their diet with nuts, fruit, and seeds).

Abyssinian ground hornbills are usually in pairs, or small family groups of as many as six individuals, but usually only two to four. They nest on the ground, or near the ground, and often return to the same nest year after year. They are monogamous and keep the same partner for many years. Unlike other hornbills, the hen is not sealed into a nesting cavity with her eggs. She lays two eggs and remains on the nest as she incubates them, the male forages and provides her with food.

Eggs hatch after about one month. Both parents feed the hatchlings who compete for food. Since the eggs are laid a few days apart, this gives the first one to hatch an advantage. The weaker chick will usually succumb to starvation after a few days. The remaining chick fledges at about three months of age, although the parents continue to feed it for up to a year. Sexual maturity is reached at about four years of age. This coupled with the fact that they only raise a maximum of one chick per year, means they cannot repopulate quickly.

These birds can fly, but prefer to walk or run, and travel great distances on the ground. Their stubby legs and toes, and broad feet make them able walkers in the grasses of their habitats. They even prefer evading predators on foot rather than with flight. They take to the trees in order to roost or breed, and sometimes to escape danger, especially if they have been startled. They are diurnal, active in daylight hours, and spend most of their time foraging on the ground for food. They are found in pairs or close knit cooperative family groups. They enjoy social activities like preening and sunbathing.

The hornbill's casque is a spongy structure made out of keratin. This structure acts as a vibrating chamber to make the hornbill's voice louder. Males have larger casques than females; a larger casque helps to attract a mate. Neck wattles are inflatable, and are used to produce enhance grunting or booming vocalizations. Males use their wattles during courtship, puffing them up to attract the females.

When hunting a venomous snake, the long bill can serve to protect the bird as it can be used like tongs to pick up the snake and keep the hornbill out of harm's way. The first and second vertebrae (axis and atlas) of hornbills are fused to help support the weight and position of the skull/beak. Another interesting adaptation is that this bird has long eyelashes which are actually modified feathers. These help to protect the birds’ eyes from dirt and injury.

Leopards hunt hornbills - and so do humans. Most of the threats to their survival are human-induced, including loss of habitat, hunting (their stuffed heads are often worn by hunters to trick prey into thinking they are a hornbill), and in some places superstition names hornbills as bringers of bad luck, and are killed as a result.