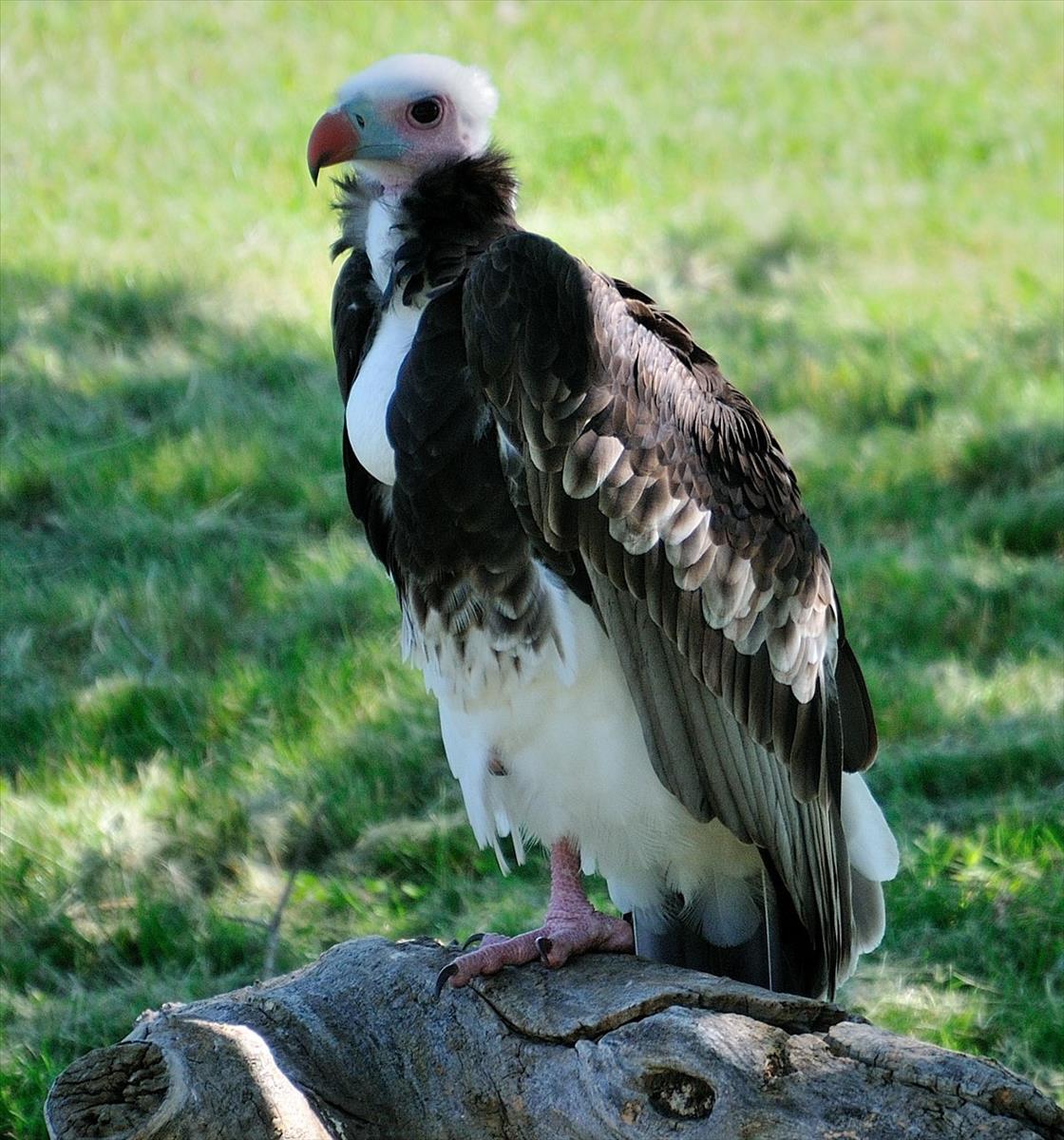 This vulture is endowed with an old-fashioned look that starts with a classic black/white contrast over its large body. Skinny pink tarsi extend out from white down that covers most of the upper legs, making it look like the white-headed vulture is wearing pantaloons. White flares up onto the belly and undertail coverts. A chocolate breast looks like a waistcoat with the white crop patch forming the V at the top. White continues halfway up a neck almost encircled by a black ruff. White down also covers the head from the forehead back to an angular crested crown, and down the nape to tuck into the ruff.

Long wings, extending just beyond the tail, are mostly black. Exceptions are: white inner secondaries on the female (grey for male); a band of buff-edged wing coverts on the outer wing; and underwing coverts tipped white so that, when the wings are extended, an arc of white runs longitudinally through their middle. The shortish wedge-shaped tail is also black.

Bare pink skin covers the face including the lores, cheeks, eye ring, and chin. The skin shades into lilac on the neck. A round hole in the cheek is the ear. The heavy-looking bill is orange-red with a black tip and the upper mandible is sharply curved. The cere is pale blue and eyes are a bronze colour. Talons are black and acutely curved. The juvenile fledges with a head of white down that turns dark brown.

Avoiding forests and human habitation, Trigonoceps occipitalis occupies treed savanna. From there it forages over open spaces like grasslands, thornbush, subdesert, and other sparsely vegetated regions. Though mainly a lowland species, it has been found up to 4,000 metres.

Primarily a scavenger, it specializes in the skin, bone fragments and other scraps from carrion. It will also pirate from other birds, especially the Marabou stork. It eats locusts and termites as well as bird eggs, and the occasional stranded fish or amphibian.

Well before egg laying, pairs connect in arboreal roosts and demonstrate their bond by soaring and circling in unison above the breeding area. The nest is built on the crown of a tall, flat-topped tree, usually an acacia or giant baobab. About 120 cm in diameter, the nest is a rather deep stick platform, lined with grass. Eggs are laid in the dry season of October to January in West Africa. In East Africa, it could be any month depending on local rainfall patterns. In southern Africa, May to August is favoured during the dry season. A single egg is incubated for 51 to 56 days.

The hatchling is fed regurgitated food from the crops of both parents. The white-downed chick fledges in 110 to 120 days. Starting with the first molt at about 12 months old, it gradually acquires full adult plumage over six or seven years.

Bare facial skin evolved because it's easier to keep clean than feathers, an obvious advantage when vultures are feasting upon rotting carcasses. It’s also a good thermal regulator since an ample supply of blood vessels exists below that skin, bringing blood to the surface where it can radiate heat away and keep the body’s temperature down. As well, the skin has the advantage of changing colour according to the bird’s mood. For example, the throat flushes red when this vulture gets excited.

Trigonoceps occipitalis has been called the most perfectly adapted land bird for soaring, expending little energy to travel great distances. Its relative lightness for a vulture affords it greater agility and mobility. Lengthy wings rarely have to be flapped in thermals. Its smaller size allows it to get airborne without a run, another energy saver.

It takes off early in the morning to hunt, soaring at altitudes from 200 to 2000 metres over open landscape. Excellent eyesight allows it to spot carcasses or other scavengers like hyenas. It can also recognize when other vultures are descending. It will follow by circling lower and lower. Cautious, it finds a nearby perch. Avoiding the mayhem around the carcass, it finds scraps of meat, bones or skin and moves away to eat in peace. This strategy helps keep gore on its feathers to a minimum.

If there's enough food to stuff themselves, white-headed vultures’ crops bulge out and they drowsily perch while the food digests. Highly corrosive stomach acid, with a pH measuring around one, enables them to digest the putrid, bacteria-infested carrion. They also have high amounts of antibodies against botulism toxins, which may not reach the stomach. Other antibodies provide resistance to anthrax, cholera and salmonella.

This vulture is territorial and has a threat display. While holding its head and neck almost horizontal, it will move towards an intruder and hold one leg forwards while it hisses. But like other vultures, the white-headed vulture does not have to physically attack. Because of the putrid carrion moving through its digestive system, its vomit is foul smelling and extremely acidic to the point where it can burn predators.

Its hissing is a strange hoarse cry emitted when competing for food. Otherwise it's almost voiceless because its syrinx is hardly developed. Since it depends so much on its flying ability, its molt is slow. This prevents large gaps in the flight feathers which would hinder flying.

Vultures urinate down their legs so that their powerful uric acid can kill bacteria picked up by hanging around carcasses. It also acts as a coolant when it evaporates. The white-headed vulture does not migrate. Like other vultures, it can approach 90 kilometers per hour in flight.

Farmers sometimes hunt Trigonoceps occipitalis in the mistaken belief that they are killing cattle. However their talons are not strong enough. By riding the environment of disease-ridden carcasses, they help prevent diseases from spreading to the rest of the animal population. Ironically, cattle can be a danger to white-headed vultures since cattle are often treated with an anti-inflammatory drug Diclofenac, which is toxic to some animals. Though efforts are being made to restrict Diclofenac’s sale, resistance is strong. An effort is being made to educate farmers about Diclofenac’s impact on antelopes, gazelles as well as vultures.

A decline in populations of wild grazing mammals translates into a decline in sources of food for vultures. When they do find a dead animal, insecticides are sometimes a problem because farmers try to kill predators such as jackals and hyenas with insecticide-laced carcasses. Use of poisons is now banned in some jurisdictions like Namibia.

Many areas, such as South Africa, have seen a large reduction in suitable habitat because of agricultural expansion and overgrazing. Up to 60% of pairs do not attempt to breed each year, contributing to the low density of this vulture throughout most of its range. Other problems include the international trade in raptors; use in traditional medicines; and power lines.