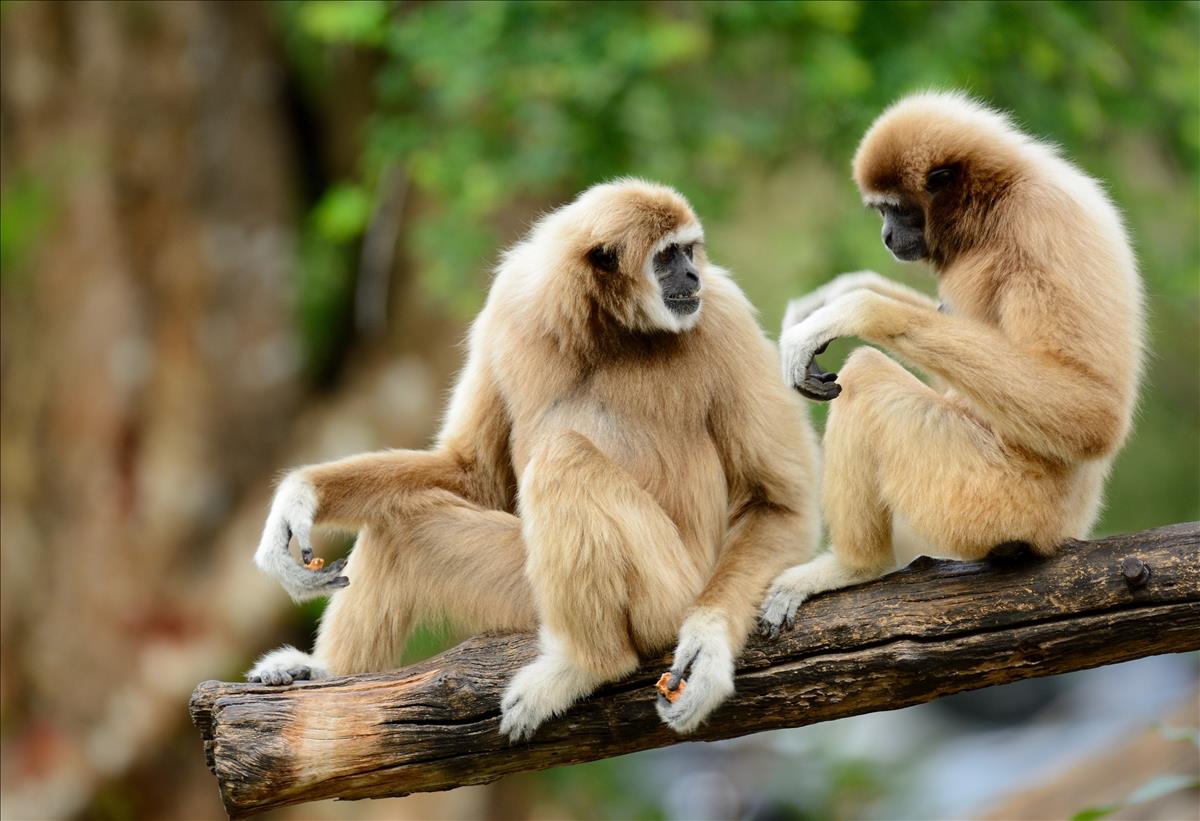 There is a great individual variation in colour. It ranges from nearly black through various shades of buff to almost cream. This species of gibbon has white hands and feet, and the face is encircled with white. Many gibbons are almost white at birth and do not become their final colour until they are two to four years old. Gibbon arms are twice the length of the trunk and about one and a half times the length of the legs. They have very flexible shoulder joints, long hands and fingers with the thumb joint opposable. The feet are equally well developed with the large toe joint opposable. They have no tails. There seems to be no difference in secondary sexual characteristics between male and females. Adults weigh five to eight kg and are 43 to 63 cm long.

In the adult female the menstrual cycle varies from 21 to 43 days. Usually one young is born at two year intervals after a gestation period of 200 - 212 days. The young at birth is very sparsely haired, but at one month is fully haired and have all four incisor teeth of the first set showing. The full set is acquired by seven months. The baby is carried by the mother almost continuously until fully weaned at four to seven months. Gibbons mature in six to ten years. In all species of gibbon, males and females mate for life. Once the vital relationship so important for protecting the slowly developing young has been formed, it is almost impossible for it to be broken. The usual group of gibbons consists of a male, a female, and their offspring. By the time the young gibbon is about two years old, it is fairly independent, feeding itself and moving freely through the trees on its own. However, it is still an adolescent and must remain within the family unit for a few more years. The mother becomes pregnant again and the family continues to grow as a tightly knit group. Gibbons have lived 31 years in captivity.

Hylobates means “dweller in the trees” and these animals fully justify their name. Gibbons do most of their traveling through the trees by swinging from branch to branch, using their arms alternately and using their hands like hooks, not grasping the branch but making long swings, like leaps in which neither arm supports them. By this method of locomotion, called ”brachiation”, gibbons may cover three metres in a single swing. They can leap from branch to branch for a distance of nine or more metres. Gibbons also run or walk upright along large boughs. On the ground they hold their arms up at an angle for balance and to keep them from dragging on the ground. They sleep sitting erect in trees, huddling together in twos and threes. Their buttock pads serve as an alternative to nests, providing the gibbon with comfort when at rest. Each family group lives in an area and defends this territory against all other gibbons; intruders are warned of the group’s presence by the hoo-hoo-hoo calls which are loud and carry long distances. Gibbons are very vocal, especially in the morning when the female begins to emit penetrating hooting calls to remind other families in the area of the borders of the territories. The male also takes over in repeating these calls. In addition, at the height of a calling cycle, adult females utter a distinctive prolonged wail which rises by irregular swoops through about two octaves. A variety of squeaks are also uttered, especially by juveniles. During meal time they will give off a gentle sounding soft hoot while waiting for their food.

Why has the gibbon alone remained small and agile while the rest of the apes have evolved toward ever increasing size? One answer is that, for their specialized way of life, natural selection favoured the smaller individuals; the gibbon’s light weight and agility ensure it virtual freedom from predators and a limitless food supply. The ability to brachiate, or swing hand over hand through the trees, is a characteristic of the apes, although not all of them use it. The undisputed king of the art is the gibbon, whose slight body, elongated arms and fingers make it beautifully suited to arboreal locomotion. The gibbon’s wrist, arm, and shoulder are specially adapted for mobility as it reaches grasps and changes its holds; proportionately, its arms are longer than those of any other ape. When a gibbon is frightened or excited, it can plunge through the forest canopy at astonishing speeds, sometimes covering nine metres or more in a single jump without a break in its stride. Although great bursts of high speed brachiation are short-lived, they are sufficient to put considerable distance between a gibbon and its most serious predator, the leopard.