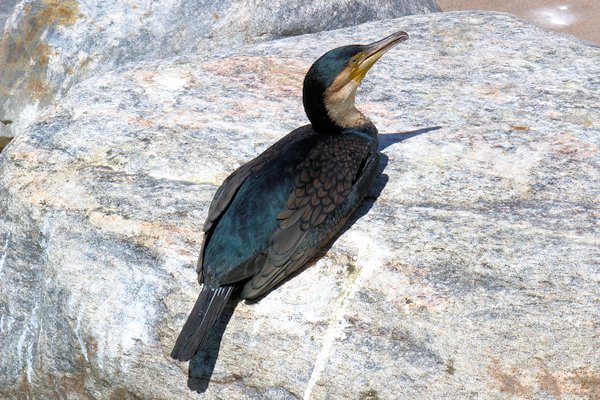 Once considered a subspecies of the world-ranging great cormorant, the major distinction between the two is its white breast and neck (excepting the hindneck). Otherwise each has a white cheek patch. A brown head is broken up by yellow covering the cere, lores and chin. A yellow orbital ring surrounds a green eye. The bill is long and thin, with an upper mandible that is sharply curved at its tip. The lower mandible is white to grey. The long hindneck is brown and shaggy. Other than a white patch on the thigh, body plumage on the white-breasted cormorant is a glossy dark brown. Light brown appears on the upper wing feathers to create a scaled effect. The tail fans out. Legs are black or grey. The feet are totipalmate, which means the webbing connects all four toes. Juvenile’s uppers are a lighter brown than adults. Under parts are entirely off-white.

Prefers open water whether saline, fresh or brackish. In the ocean, it usually stays near shore since it likes relatively shallow water. Inland, it prefers to inhabit areas around lakes, dams, reservoirs, and rivers with sufficient fish.

Phalacrocorax lucidus has a diet heavy on fish. It will regurgitate the bones and scales. Ocean fish that it prefers are usually of little commercial importance like bottom-dwelling bream. It occasionally eats eels, water snakes, and crustaceans. In fresh water, it supplements with frogs and crabs.

The white-breasted cormorant starts breeding between three and five years of age. Males compete for nest sites, sometimes jousting by latching on to a competitor`s bill, neck, or wing. Usually nobody gets hurt and most displays are just threats like pointing, gaping, thrusting, and growling. The male attracts a mate by repeatedly exposing and covering up his white thigh patch. Another trick is bending his head back as far as he can while emitting gargling sounds. For nesting, half the coastal population takes advantage of man-made structures like jetties, shipwrecks, marine platforms, or pylons. The rest use islands, offshore rocks or cliffs overlooking water. Nesting can be in small colonies or single pairs. Over 90% of breeding birds change partners each year.

On their two or three eggs, the parents alternate incubation stints of up to six hours, performing a display at changeover. For 28 to 30 days, they position the eggs between the webbing and belly feathers. On hatching, the chick is naked, though black down grows in quickly. Its begging display involves pecking at its parents’ bills while squealing. When a bill opens, the helpless newborn flails around for regurgitated food in the parental throat. A few are not strong enough and they die quickly. About two weeks after hatching, the parents discontinue brooding, but continue to provide food, water and shade. The young bird is now more energetic, beating its wings when it wants food. The weakest sibling often dies as it can't compete. At this point, the stronger birds defend against predators by swaying their heads and lunging repeatedly.

Fledging occurs at about 50 days and flight in the next 10 days. They continue feeding from their parents for another six weeks. By now their wing beating is frenzied. This is tough on a parent with two or three hungry adult-sized juveniles coming at it. Of all eggs laid, about 75% hatch. Of those newborns, 70% fledge. About 45% survive the first year. The major causes of death for the young are exposure, predation, starvation, and falling from cliffs.

With an almost flat belly and reduced keel (the extension of the breastbone which anchors the flight muscles), the white-breasted cormorant is streamlined for underwater pursuit. For efficient propulsion, strong thighs and powerful fully webbed feet extend well back. Wings are tucked close to the body. Dives average about six metres and last 40 seconds or more, enabled by a large volume of blood in relation to its body weight. It dives in a smooth arc, making it look effortless. Its broad tail and webbed feet are efficient steering mechanisms.

The white-breasted cormorant has adapted to balance thermoregulation and the need to reduce buoyancy to chase fish. Although they have an oil gland, they don’t appear to use it to waterproof feathers since that would retain air bubbles. They also have dense bones, low body fat and much-reduced air sacs in the respiratory system, which all decrease buoyancy. The outer vane of each feather becomes soaked; the vane around the rachis (the central shaft) is waterproof so that a thin insulating layer of air is retained when the cormorant dives, important for a bird with little body fat. The small air sacs help maintain heat too since the function of larger sacs is similar to sweating except that heat exchange takes place internally through radiation and vaporization. The small gular sac also radiates heat rapidly because capillaries are concentrated beneath its surface. The white-breasted cormorant can speed this process up by fluttering the sac. Its lack of buoyancy can be observed in its surface swimming since its body is partially submerged.

Phalacrocorax lucidus requires about 500 grams of fish per day, one-sixth of a male’s weight. It usually takes just one foraging period. Small fish are usually eaten underwater. Larger ones are brought to the surface. Because of unique musculature that allows the neck to stretch, it's able to swallow fish 75 cm long. Cormorants can drink sea water because of salt glands above each eye. Once removed from the blood, the brine is excreted from the nostrils by headshaking. After eating, the white-breasted cormorant spreads out its wings and tail to dry. Preening takes about half an hour. Loafing fills the rest of the day.

In the air, it flies low with powerful, continuous wing beats, reaching speeds of 50 km/hour or more. It extends its neck for less resistance. Flocks fly in a string. Depending on the amount of food available nearby, colonies can be anywhere from 10 to 500 pairs. They can fly up to 60 kilometers to forage though they do not go out to sea. They like to roost over water so they can be found on partially submerged buildings or fences, pylons, and electrical transmission towers. Inland, they are nomadic if water levels drop. If necessary, they can move 1000 kilometers. They can live up to 20 years.

Fishermen will shoot or poison white-breasted cormorants as they consider them competitors. That is unlikely since they usually eat smaller species that humans don’t want. This cormorant will often leave the nesting area if people are present, leaving eggs and chicks susceptible to predators like gulls. They are also vulnerable to getting caught up in fishing lines. Oil pollution is a problem since their plumage soaks it up.
Newcastle disease is spread by a deadly virus that can affect a cormorant’s respiratory, gastrointestinal and central nervous systems. Though it can spread to humans, symptoms are mild. Avian cholera is a bacterial disease associated with wetlands that can wipe out a flock of cormorants rapidly. Avian influenza (or bird flu) is not often dangerous for cormorants, but can spread to humans to their peril.