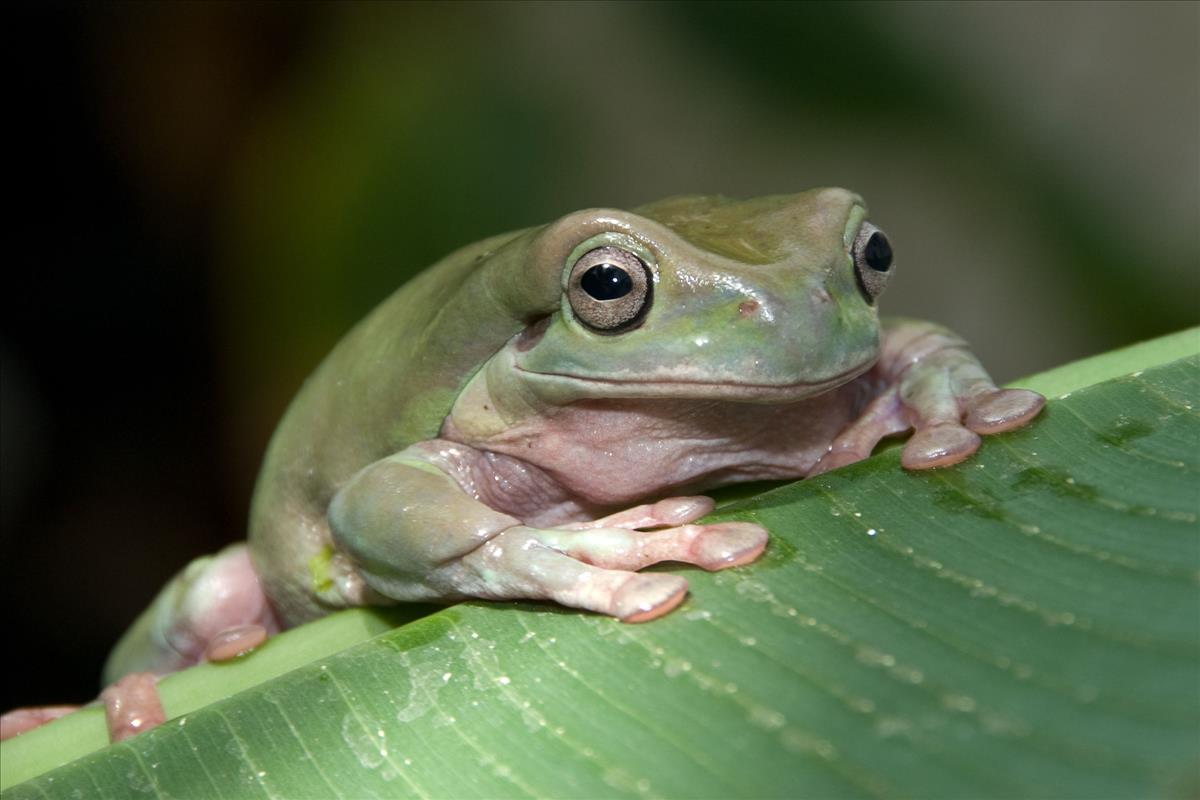 Also known as the Australian green tree frog, the White’s tree frog has a bluish green to emerald green back which can change shades depending on the temperature and colour of the environment. It has scattered white or gold spots on the side and occasionally on the back, from the angle of the mouth to the base of the forearms. The ventral surface is milky white and rough in texture. The dorsum and throat are smoother. Vomerine teeth, used for holding food, are prominent in the front part of the mouth.

The eyes are golden with a horizontal pupil, typical of the Litoria genus, whereas other hylids tend to have a vertical pupil. The fatty ridge over the eye is a very distinct trait of the White’s tree frog. There is also a distinct tympanum (membrane covering the external opening of the middle ear) present. The finger and toe pads are large. The fingers are one-third webbed and the toes are almost completely webbed. An average female is about 10 cm long with the males being smaller at about seven centimetres.

In Australia, this species is found in a range of habitats including both wet and dry forest, and grasslands in cooler climates. Typically though, they are found in the canopy of trees near a water source. It is also found in domestic environments such as city reservoirs, water tanks, and bathrooms of peoples’ homes; wherever there is high humidity and cooler than external temperatures.

Largely insectivorous, the diet consists mainly of insects and spiders but can include smaller frogs.

Breeding takes place in the rainy season and often occurs in very moist places including urban drainage systems and water tanks. The female expels her eggs into the male’s sperm cloud where they are fertilized before sinking to the bottom of whatever water system they are in. The eggs take about one to three days to hatch and metamorphosis begins in three weeks under good conditions. Young frogs mature in about two years.

The skin is covered with a thick cuticle that allows it to retain moisture as an adaptation to arid areas. It has been discovered that skin secretions that destroy pathogens on the skin of these frogs can also have benefits to humans. The secretions have antibacterial and antiviral properties and have also been known to lower blood pressure in humans.

Its’ large terminal discs on fingers and toes enable this frog to climb in search of water or damp places to live during dry periods. This frog’s adaptability allows it to share suburban and urban areas with humans. It is very tame in nature and has little fear of humans, which makes it a popular pet. In Australia it has a protected status, and restrictions on the pet industry are in place.

The White’s tree frog has a few native predators such as snakes, lizards, and birds but is also preyed upon by cats and dogs in its’ suburban habitats. Habitat loss associated with urban expansion is a significant threat in coastal areas. Some animals have been found with a
Chytrid fungus and there is potential for a widespread epidemic in the near future.