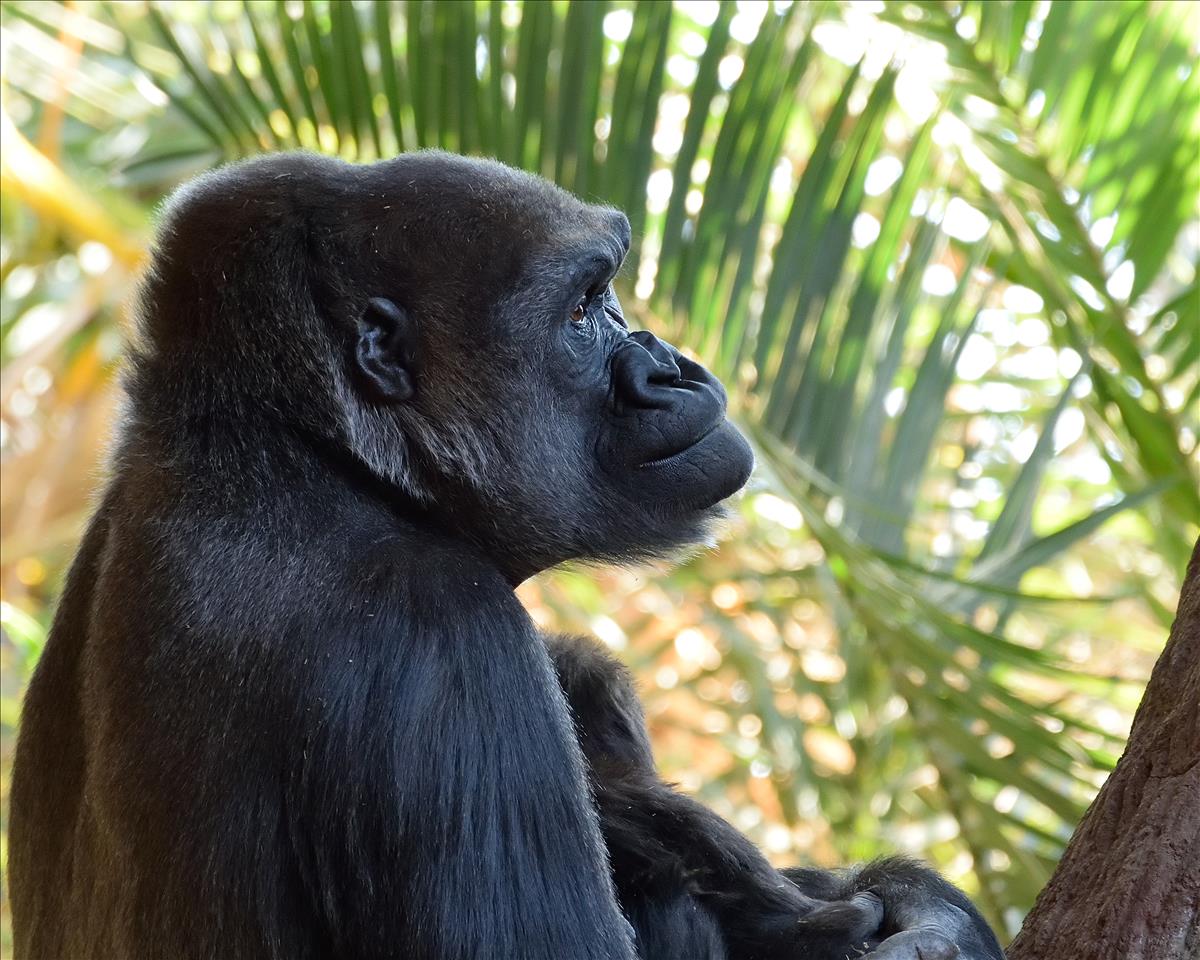 Gorillas are the largest of the primates. Western lowland gorillas are the smallest of the four sub-species. The males, on average, weigh approximately 135 - 220 kg and the females weigh about half of that, around 70 - 90 kg. They are sexually dimorphic. The male is very stocky and powerful in the body, with wide shoulders and chest. The females are much smaller and slimmer. Gorillas develop a “sagittal crest” which is a ridge of bone on top of their head. The male’s crest is more prominent than the female’s. The heavy muscled head and shoulder area of the adult male is what really identifies him in the wild from the female when only the head is showing. The nostrils are large and flaring, the ears small and close to the head, the eyes are wide set and expressive. The muscular arms are longer than the short thick legs, and the broad hands are equipped with short fingers and thumbs.

The colour of the coat varies considerably, ranging from black, silver and shades of red. Black is the most common. Gorilla skin is also black. As a male gorilla reaches physical maturity (between 12 and 15 years of age), he develops his silvery grey colouration giving them the name “silverback”. Old males often lack chest hair. The face, ears, palms and soles of the feet are bare.

They are herbivores feeding mainly on juicy plant stems, vines and leaves. Bark, roots and fruits are also taken, the choice parts being selected, the remainder discarded. There is a definite preference shown in plant selection, wild celery, thistles, nettles, bamboo shoots, and bedstraw (Gallium) are among those chosen.

Females mature sexually around 8 years of age and are fully grown at 8 - 10 years of age. Males are sexually mature at about 10 years of age and fully grown at 12 - 15 years. Females begin breeding as soon as they are sexually mature, but male gorillas need to physically mature so they can attain silverback status and lead a group of gorillas. Typically one dominant male within a gorilla troop mates with the females in that group. The dominant male, because of his perceived superior fighting ability, is preferred by the females as he will be better able to protect them and their offspring. This usually occurs between the ages of 15 and 20 years. In male apes, including humans, potency (the ability to sire offspring) is continuous until it is lost through senescence. Female gorillas have a menstrual cycle similar to that in humans, the average length being 30 - 31 days.

The average gestation period is 265 days. A single young is born weighing approximately two kg. The baby gorilla is completely dependent on its mother for food and protection. At birth they appear to lack the strength to grasp their mother's hair, so she will support her infant with both hands. When on the move, she cradles the infant to her breast with one hand. It begins to eat vegetable matter at about six weeks of age, but nursing continues for another year and a half to two years. By one month, the infant clings to its mother unaided; by three months it rides on its mother's back; by four or five months it can walk unaided, by six months it can climb and is very active.

Young gorillas are incredibly playful. Juveniles climb more frequently and with greater ease than the adults. Very often other females will play the role of "aunt" to a baby and participate in its care, playing with it and carrying it around. Gorillas live in fairly stable groups of 5 to 15 individuals. Larger bands consist of an adult male, several younger males and a large number of females with their young. Smaller groups may consist of only one adult male with a few females and their young.

Locomotion is mainly quadrupedal, moving in a stooped posture with the knuckles of the hands resting on the ground. Gorillas can move bipedally over short distances. The gorilla, being the most terrestrial of the apes, has feet more like a man’s than any other ape. The hands are also similar to human hands; the palm being broader than other apes. The skin on the back of the second finger is thickened; this is the surface on which the gorilla rests its weight when walking in the normal quadrupedal manner.

Gorillas are strictly diurnal in habit, building nests to rest in each night. Day nests are built as well. Both types of nests may be built on the ground or in trees. When they build in trees, they are seldom more than nine meters from the ground. The adult male, because of his size, does not build nests in trees. Nests are occupied for one night only.

Gorillas are quiet most of the time, and they enjoy dozing and sunbathing in the mid-morning between bouts of feeding. Postures, gestures, facial expressions, and vocalizations are all used in communication within the group. Gorillas vocalize a great deal from the throat creating roars, growls, barks, grunts, purrs, croaks, hoots, squeaks, and screeches. Only one or two sounds carry far enough to reach other groups. They can very effectively warn each other of impending danger and intimidate intruders. The hooting sound is usually the prelude to the climax of their emotional expression - the drumming display. Flat or slightly cupped hands are beat in rapid alternation upon the chest, abdomen, hips, tree trunks, on the ground, or on anything that is handy. Drumming sounds the alarm in case of danger, threatens the invader, but it may also be done in play. This display includes rising on its legs, throwing vegetation in the air, leg kicking, running sideways, slapping and tearing nearby vegetation, and thumping the ground. Many variations occur, and some acts may occur alone. Aggressive charges rarely result in serious physical combat. The gorilla avoids conflict until extremely hard pressed, with the dominant male always acting in defense of his group.

As is the case with many species, humans are the primary threat to the survival of gorillas. Gorillas are widely hunted for "bushmeat" and the young are collected for sale to the pet trade, a practice that is now illegal. Habitat loss also significantly jeopardizes gorilla populations. The main reasons for habitat loss are mining for charcoal and coltan (which is used in cell phones and other electronics), logging for timber and fuel wood, and agricultural expansion. Civil wars occurring in gorilla habitat are also a serious threat. Outbreaks of disease, in particular the Ebola virus are contributing factors to declining gorilla populations. Also, young gorillas are susceptible to predation by leopards.