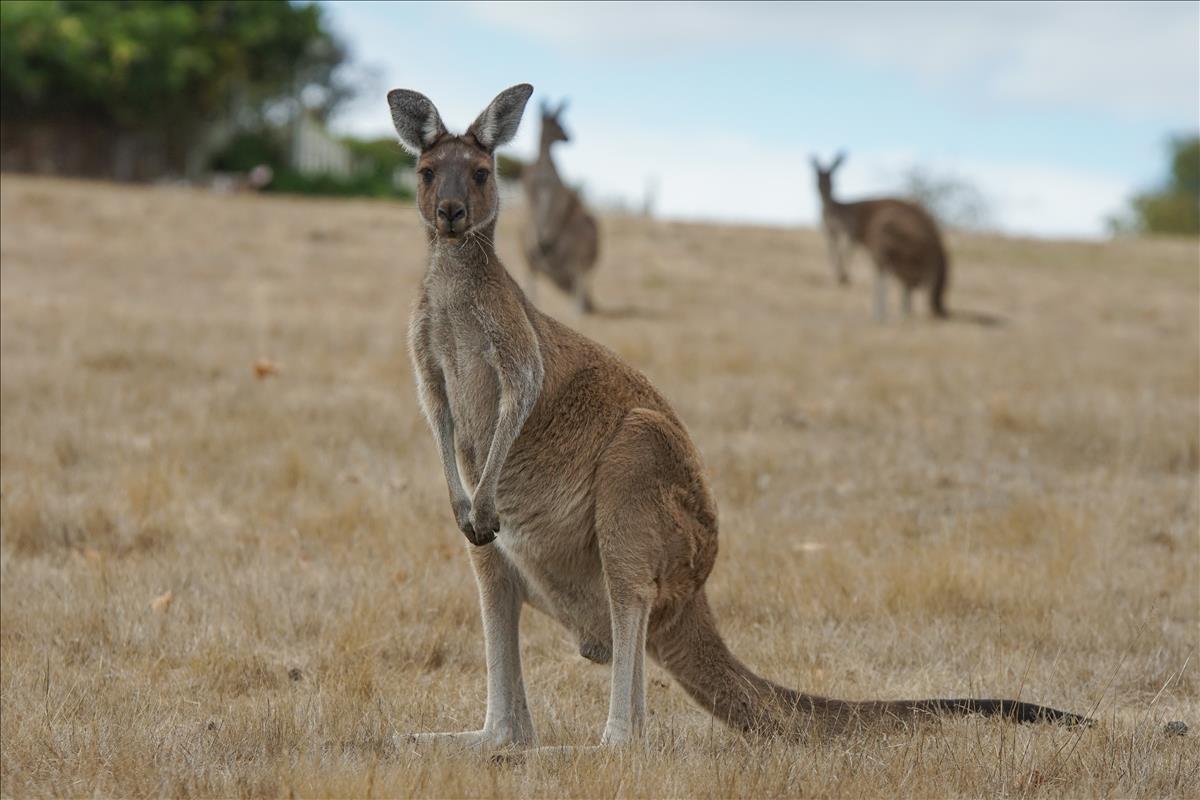 Males (bucks) are larger than females (does). They have small heads, large ears, long powerful hind legs, a long thick tail, and small forelegs. Males have a strong, curry-like odour, giving them the common name of ‘stinker’. In Western Australia, they have a slender build and grey-brown colour. In Southern Australia, the build is stockier, and they are a brown colour with blue-grey underparts.

Their preferred habitat is open grassland, near water, with nearby forest/woodland. They are also found on open pastureland and cleared farmland. They shelter at the base of trees and rocks during the day; browsing through grasslands at dusk.

Grasses, herb and low shrubs, as well as tree bark.

Breeding is continuous, but most births occur in October and November (Australian summer) when chances for the young’s survival are most likely. The gestation period is 27-37 days; females reach breeding age at around two years of age; males six months later. The female produces a single underdeveloped offspring, blind and hairless, almost the size of a lima bean. The mother licks a path up to the pouch and the infant claws its way up the moistened furry front, helped by its sense of smell (it will die if it loses its way), where it clamps firmly onto a teat. It takes about three minutes to travel the 15 cm to reach the pouch. Here the joey will stay hidden for about three months. They are not considered born until they can be seen. The joey will not leave the pouch for about six months after which it will venture out for short periods, but returns for rest and food. After another two months it will stay outside the pouch, but continue to suckle up to 18 months. Like all kangaroos, the western grey continues to grow throughout their lives. Some may reach the age of 20, but lifespan in the wild seldom exceeds seven years. Western grey kangaroos differ from the Eastern grey (M. giganticus) in colour, gestation period, skin characteristics, and size.

They have a multi-chambered stomach, common to all kangaroos and are able in times of drought to ingest plant fibre high in cellulose and the harsh spinifex grass. The western grey kangaroo has an acute sense of smell and hearing. Embryonic diapause (delayed implantation) is not known in this species of kangaroo.

The western grey kangaroo has an efficient and well organized thermo-regulatory defense against overheating. It not only licks its forelimbs and pants during heat stress, but it also sweats while exercising to get rid of surplus heat. Also, when it loses water, it adjusts the volume of the vascular system so that the function of the heart is not impaired.

At low speeds, large kangaroos have major locomotion problems, but at high speeds their hopping gait has marked advantages over running. Once they start hopping the energetic costs do not change over a wide range of speeds.

Western grey kangaroo populations have increased dramatically since European settlement of their native ranges. While they are protected by Australian law, their numbers are also controlled by Australian government, under strict legislation as of 1999. They are one of four species of kangaroo that can be commercially harvested by licensed hunters. Quotas are set on the basis of population only and reviewed on an annual basis. Conservation is the foremost concern. Other threats include animals struck by vehicles, and loss of habitat due to land clearance for cereal crops. Drought conditions often mean that joeys do not survive to leave the pouch.