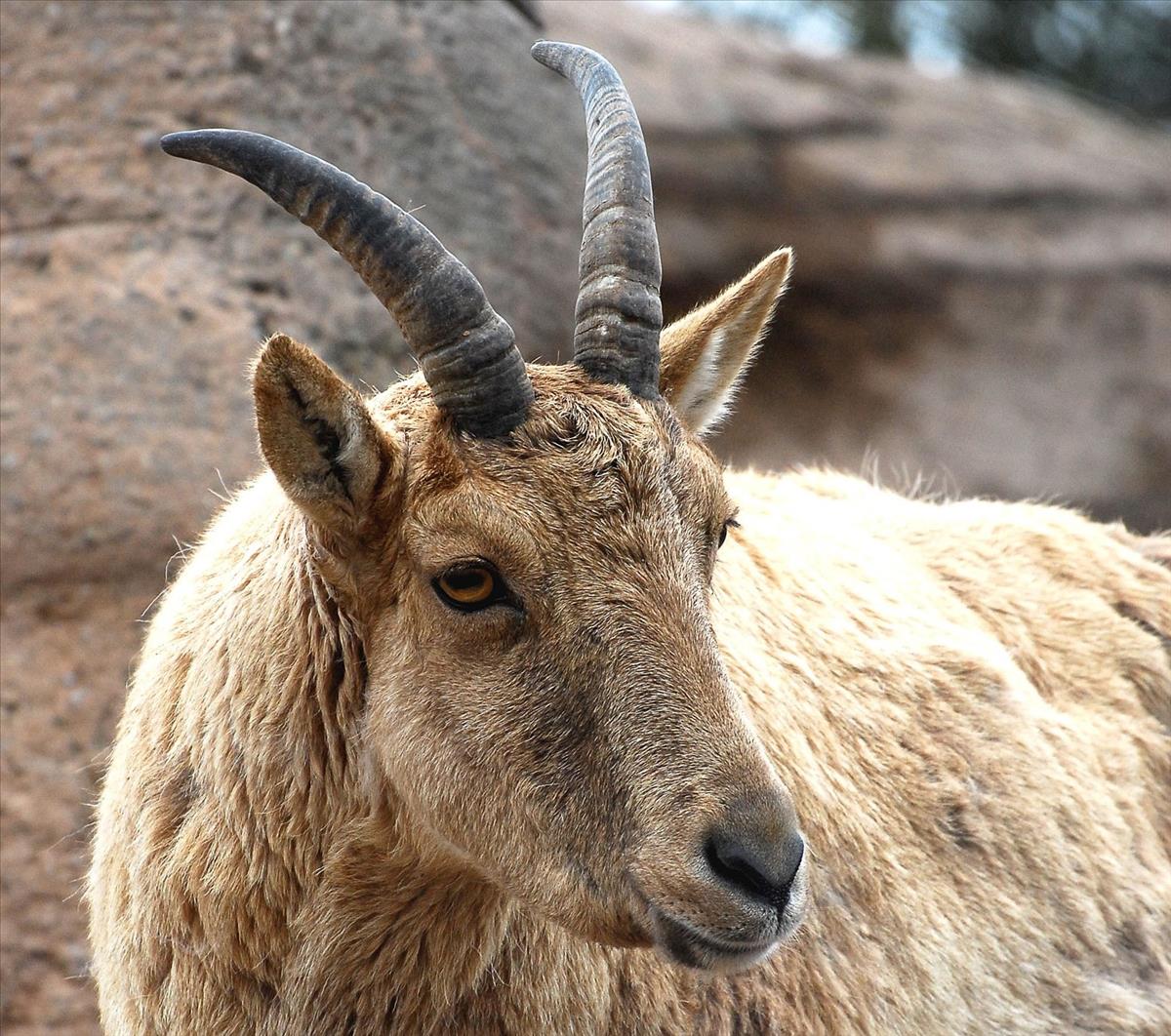 The summer coat of the West Caucasian tur varies from rusty grey to rufous-brown, while in winter the coat dulls to a grayish-brown. The underparts are generally the same color as the rest of the body in the summer coat, lightening to a yellowish-grey or off white in winter, especially in females. The chest is a dark reddish-brown. The moult of the winter coat begins in March and extends to mid-June. The guard hairs and underfur of the coat begin to grow longer during September and the full winter coat is fully grown in by the end of October.

The body is sturdy with a relatively long, deep trunk and the legs are short, but strong. The front surfaces of the legs are a deep brown color, becoming darker and more intense towards the hooves and a white spot may be present above each hoof. The short tail is covered with dark hairs. The face of males tends to be darker and browner than the body, especially on the forehead. Dense, long, curly hair grows on the foreheads of males, especially in winter, and forms distinctive whorls. Another whorl often occurs on the nose. Males, and occasionally females, grow a beard of moderate length on the chin. In the summer, the beard is short and dark brown, becoming longer and fuller in winter.

Both sexes of this species have horns, although there are very apparent differences between males and females. The horns of males are relatively short when compared to other ibex, but are the thickest of the genus Capra. They are bent like a scimitar in a single plane, and diverge in a wide "V" laterally from their base. The front surfaces of the horns are ridged strongly, but do not have the large knots of other ibex. In cross-section, the horns of males are in the form of rounded triangles. The horns grow to 66 - 74 cm in length. The width of the horns is clearly demonstrated by the basal circumference, which at 29 - 32 cm may be over 30% of the total horn length. They may weigh up to 1.8 kg each. The horns of adult females are thin and relatively weak. Elliptical in cross-section, the horns curve slightly in a single plane and rarely exceed 30 cm in length and 10 cm in circumference at their base.

Western part of the Caucasus Mountains in Georgia and Russia.

They live in rugged mountain country, rocky crags, and meadows just below the snowline between 800 and 4,000 metres above sea level.

They are herbivores, feeding on grass and herbs in summer, leaves in winter. The diet contains over a hundred recorded species of plants. Grasses, including sweet vernal grass, foxtail, mountain fescue, and meadow grass, are extremely important to tur, comprising 80-90% of raw stomach contents in the summer, and up to 70% in winter. Other herbaceous plants eaten include chamomile, cornflower, dandelion, bennet, meadow sweet, cinquefoil, buttercup, aconite, crowfoot, and anenome, as well as figworts, buckwheat, and bluebell. West Caucasian tur will consume shoots and leaves of willow and birch during summer, and (in the Caucasian preserve) have been observed in forested regions foraging for mushrooms (Russula sp.).

The West Caucasian tur predominantly lives in single sex herds. For most of the year, males and females live separately. They are seasonal breeders and only during the mating season, which extends from November to early January, do mixed herds form. They continue to live together for up to two months after the mating season ends.

Gestation lasts for 150 - 160 days, with births occurring from mid to late May through June and sometimes into July. A single kid is the norm, although twins are known, and the weight at birth ranges from 3,500 to 4,200 grams. Females do not retreat to a sheltered area prior to parturition, but instead give birth in accessible areas. The kid gains its footing within a few hours and is fleet-footed after only a day. Females will generally hang back from the herd for the first ten days after birth, with the kid following the mother closely. The mother protects the young by fighting with her horns or by decoying the intruder. Young will suckle until the end of the summer and on rare occasions longer, but begin sampling solid foods (grasses) at one month of age. The young mature in 8 - 12 months.

Females reach sexual maturity in their second year, but at this age they are rarely sexually active, typically breeding for the first time during their third year. Although young males may become sexually mature at this time, they are not socially mature and ready to breed until four or five years of age. Life span is 10 to 12 years.

They are most active from late afternoon until early morning, when they emerge from cover to start grazing. In the winter, foraging is made harder by the snowfall and tur use their hooves to scrape away snow to reach the vegetation buried below, or must rely on shrubs and trees for food.

They undertake seasonal migrations, moving up to 2,000 kilometres up or down mountain slopes. When deep snow blankets the higher parts of the mountain, walking is difficult making them vulnerable to predators and exhaustion. They migrate down the slope to escape these harsh conditions. In spring, when the snow begins to thaw at higher altitudes, tur migrate back up the mountain to exploit growing vegetation. During the hottest part of the day, tur will shelter in the shade of cliffs, or in forests, and will even lie in snow if available at higher altitudes. Site selection is driven by temperature; in forests, tur will choose ravines where a steady breeze blows, while in cooler temperatures of high altitudes they may lie out in the open.

Not surprising for a mountain ungulate, tur can negotiate precipitous terrain with ease, and will rest on steep slopes by sitting on their hindquarters like a dog. While on the move, tur often follow the same trails day after day, with the result that they become well-worn and even trough-like. Herds typically travel in single file, with one individual in front of the next. They vocalize using sharp, intermittent whistling.

They and are preyed upon by wolves and lynxes. The species is also impacted by habitat loss and degradation. Livestock grazing results in competition for resources, especially with domestic sheep and goats. Snow avalanches cause most natural deaths to the western tur, combined with the impacts of severe winters.