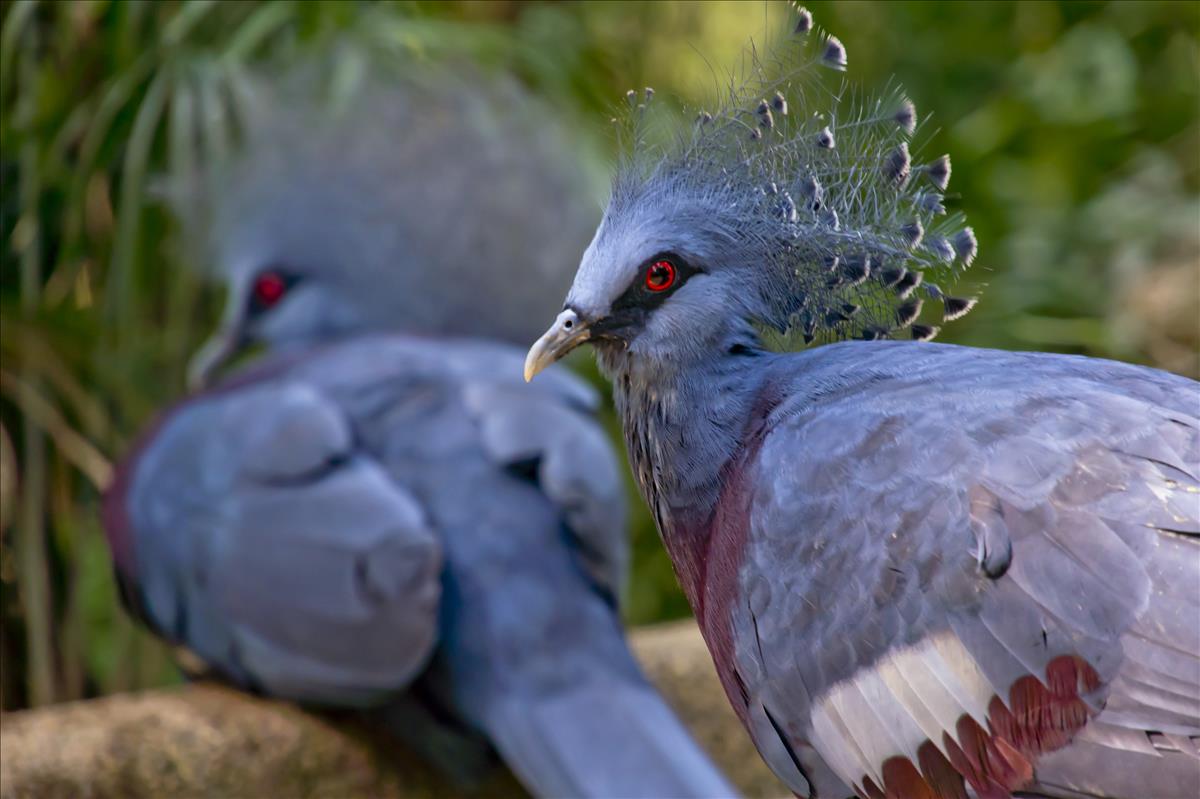 This is a very distinctive looking pigeon, easily distinguished from other pigeons by their dark blue-grey plumage and large fan-like crest feathers tipped with white and purple. The body is covered in beautiful grayish-blue feathers and the chest in purple feathers, leading to steel-grey belly feathers. There is a lacy sagittal crest on top of the head with tips ending in white. The head is small in proportion to the body, a characteristic of pigeons. The red coloured eyes are surrounded by a dark narrow eye patch. It has a long hooked beak. Legs are long and speckled brown and white; ending in orange feet. The tail is long and has a band of light bluish grey at the tip. This is one of the largest pigeons in the world. It can grow to be the size of a large chicken. They weigh around 3.4 kg and have a length of 75 - 85 cm.

Males and females look almost identical, with males sometimes a little larger than the females. Crowned pigeons differ from other pigeons in having sixteen instead of twelve tail feathers, in the scaling of their legs, in lacking an oil gland and gall bladder, and in possessing the large, fan-shaped crest of erect lacy feathers.

They are distributed in the lowland and swamp forests of northern New Guinea and surrounding islands as well as parts of Indonesia.

Dense forests of the plain and coast, and is often seen near estuaries. They live in regions where there is little competition from game birds. This is a terrestrial bird that lives on the ground and does not fly unless forced to, or when flying to roost in a tree branch at night.

It spends a great part of its time searching for food in the soft, marshy ground of its native jungle. If feeds on the ground, mainly on fallen fruit. They also consume berries, seeds, and insects. While searching for food they usually are in groups of two to ten birds.

These birds are monogamous and tend to mate for life. Birds are sexually mature at fifteen months. Bowing displays are performed by the male during courtship toward the female. He lowers his head and displays his plumage (crest) to the best advantage.

They build a fairly solid platform nest of twigs, stems, roots, and leaves. The male chooses the nesting site and gathers the nesting materials, which are set in place by the female. Nests are placed in shrubs and trees, relatively low. They prefer areas with tall hedges and thickets to woodlands.

The female lays a single egg. Male and female share incubating duties for about 30 days after the egg has been laid. The hatchling is almost naked, covered with a filamentous down. These birds are "altricial", meaning the chicks are almost helpless after hatching and require attentive parental care and feeding. Both parents care for the chick. They are fed by both parents the first few days on pigeons' milk, a curd-like material secreted by special cells lining the crop. This is scooped up by the broad, soft bill of the young inserted deeply into the parent's mouth. Gradually the adult bird supplements this with partially digested food. The young grow rapidly. In four weeks they are one quarter the size of the adults. The parents tend to the fledglings for thirteen weeks. However, if eggs or young are lost through predation or other causes, the female will usually lay again. The young will leave the nest thirty-five to forty days after hatching.

Pigeons are unusual among birds in that they produce a milk which has a chemical composition similar to that produced by mammals. Pigeon or crop milk is a secretion of the adult crop which forms the complete diet of nestlings for the first few days of life. Crop milk is produced by both sexes.

Like all pigeons, they drink by sucking up water instead of tilting their head back to swallow. All pigeon and dove species move about in flocks during the day and roost together at night. These birds begin the morning with a chorus of calls before the flock sets out to feed and drink. They then return to their perching place, where they stay during the hottest part of the day. In the afternoon they again go off to feed and drink, finally retiring at night. They have a quiet resonating call sounding like a boom.

Humans mostly. In addition to being hunted for their crests, these pigeons are also hunted for their flesh. Although protected throughout most of their range, large numbers are still exported illegally in spite of the fact that they can and have been bred in captivity. Another threat is habitat destruction through heavy logging.