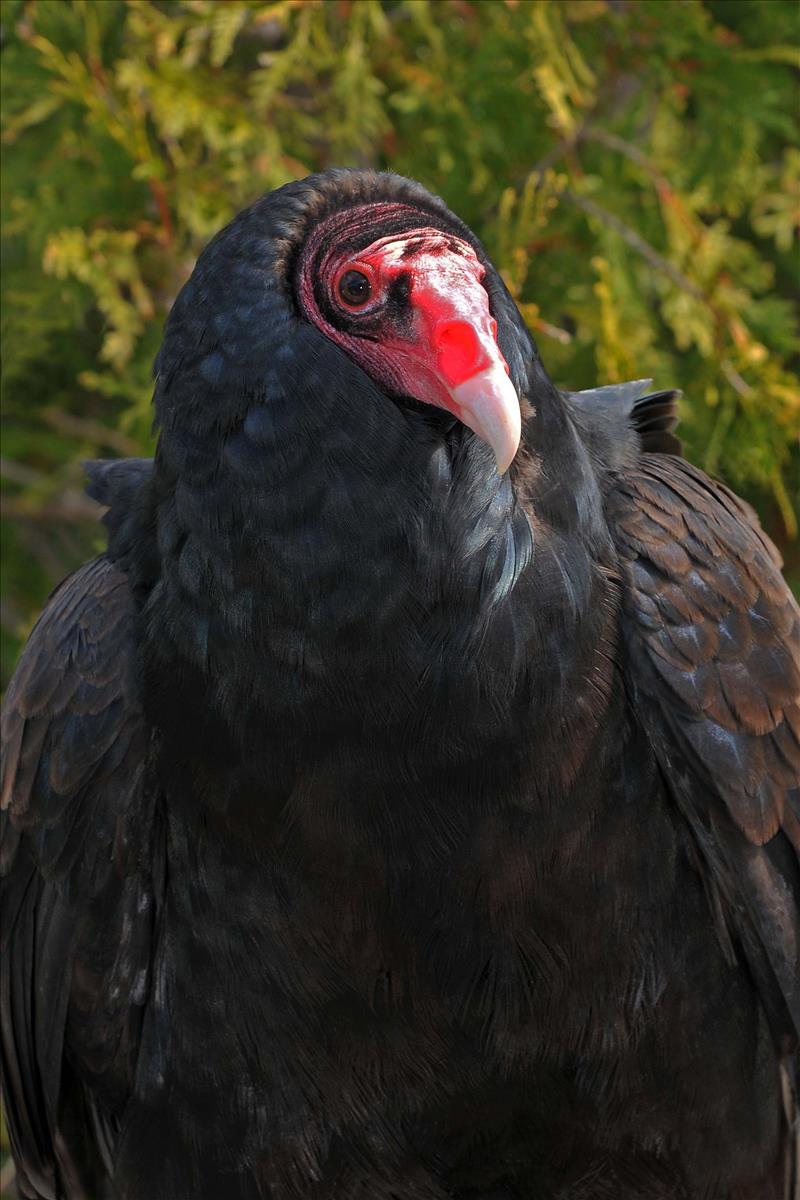 Bare, purplish-red and wrinkled, the turkey vulture’s head and neck resemble the wild turkey’s of North America, hence its name. The crown and nape are sparsely bristled and the loral area has clusters of greenish-white pimples. Eyes are greyish brown. The ivory bill is hooked. A red cere is perforated by nostrils. Ear holes are easily distinguished. All plumage is brownish black with a slight purple and green iridescence, especially on the neck and back. Feathers of the back, scapulars (shoulders) and wing coverts are edged and scaled in grey-brown.

In flight, the wings are long and broad, ending with six primary ‘fingers’. From below, the flight feathers are silvery, contrasting with the black linings. The undertail is also silvery, but darker. A longish tail is narrower than other vultures, and is arced at the tip. The long, thick legs are pink, though often whitened by defecation. Long toes have the most common bird arrangement, anisodactyly, three toes pointing forwards and one back.

Juveniles’ bodies are covered with short, downy feathers. Dusky-grey heads gradually turn red during the first year. Bill is dusky with a somewhat lighter cere. Plumage is a dull brown. Four subspecies have been identified, having slight differences in size, plumage and head colour.

Turkey vultures cover almost all of the USA, Central America and South America (excluding the high Andes). In Canada, they range through southern British Columbia, and then from southeast Alberta across the southern parts of Saskatchewan, Manitoba and Ontario. They have greatly increased their range northward over the past 40 years.

Prefers open areas with trees nearby. This includes grasslands, savanna, shrubland, and pasture. It is also found in deserts (like coastal Peru) and forested areas. Dumps are also frequented.

Carrion is its main source of food, mainly small to medium-sized mammals. It prefers fresh carrion and bypasses meat that is decomposing. It also feeds on birds and snakes, either dead or injured. Eggs and nestlings of herons and ibises are also consumed, as well as rotting vegetable matter, dead fish, insects, and dung.

Courtship rituals start in the spring with several turkey vultures in a circle, taking turns hopping around the perimeter with wings partially spread. In the air, a pair declares their territory with a short ‘follow flight’ display, one leading the other in flapping and turning. Longer is the ‘perched courtship’ display in which the pair raises their wings and a foot.

The nest is a scratched-out depression in a protected spot such as a shallow cave, dense undergrowth, or a hollow stump. No nesting material is used. Incubation of two eggs lasts 38 to 41 days. The altricial hatchlings are dependent on their parents. Parents bring them food, regurgitating it from their crops. Down covers all but their dusky heads. After 10 or 11 weeks, the young fledge and are ready to fly, though the family group remains together till fall. In breeding season, pairs remain solitary. The rest of the year, they roost in communal groups from ten to several hundred.

Their survival success is built on energy-saving adaptations. Based on their wing surface to weight ratio, turkey vultures have light wing loading. This makes them more buoyant in air than other vultures and better able to utilize thermals to help them stay in flight with minimal energy usage. With wings that are both broad and lengthy (2½ times body length), the ratio of its wing surface to body weight is very high. Takeoff requires heavy flapping, but its buoyancy gets it airborne quickly. It spirals up on a thermal, and then glides away until it has to regain altitude to repeat the process. Its flight pattern is distinctive, gliding with its wings in a ‘V’ shape while rocking gently from side to side. When it flaps its wings, they move deeply and slowly. It often flexes its wings downward until the tips almost meet. Its fingered primaries are an adaptation that slows its glide down, enabling it to forage better. Between its toes is slight vestigial webbing, which helps it decelerate as it lands.

Large olfactory lobes give it a keen sense of smell allowing it to detect, from a few miles away, gasses in the air emanating from a decaying carcass. This includes carrion concealed beneath forest canopy. This ability saves time and energy giving the turkey vulture first pickings at a carcass. It holds the carcass down with its large feet and uses its powerful bill to rip it apart (‘vulture’ is derived from the Latin vulturus = ‘tearer’). It may have to compete with other scavengers. It uses its beak, well adapted for nibbling and getting into crevices, to pick off whatever morsels are available. It stuffs as much as possible into its elastic crop, which bulges out in a vivid red.

Cathartes aura has a low metabolic rate. For nighttime roosting, it can lower its body temperature 6˚C.
To warm up in the morning, it employs the spread-winged posture, standing with its back to the sun with wings at full extension. When it's too hot, urohidrosis can be used to cool: each leg is raised alternately to the cloaca and feces are squirted on them (thus their white colour). Like human sweat, evaporation of the water from the feces removes latent heat from the skin, cooling it. (The cloaca is the common passage for urine, feces, sperm and eggs in birds.) Uric acid kills carcass-acquired bacteria on the feet. Heat is also radiated away from blood vessels that run beneath the bare skin of the head and neck. Hygienically, bare skin works well when, to get at internal organs, the vulture sticks its head into a carcass seething with toxins. Feathers, clogged with gore, would be a breeding ground for disease. Long intestines, a sophisticated immune system and corrosive stomach acid with a very low pH fight off the deadly organisms that infest rotting carcasses. In the turkey vulture, these defenses kill bacteria of salmonella, botulism, hog cholera and anthrax. Despite its immunities, it likes fresh carrion and bypasses meat that is decomposing.

Turkey vultures from South America and Central America are sedentary or nomadic. So too are birds from coastal California, southwest Arizona and those resident south of a line from Texas to Connecticut. North-eastern Canadian and American birds winter in the southern states. More westerly birds migrate to Panama, Venezuela, Columbia and Ecuador. Because they need thermals, they have to use the land bridge of Central America, often soaring upwards of 4,000 to 5,000 metres.

When threatened, the turkey vulture regurgitates semi-digested meat. It empties its crop, lightening its load for a quick takeoff and escape.

It is susceptible to poisons put into the environment such as strychnine, and cyanide. Lead poisoning from lead shot in carcasses can be a problem. The turkey vulture is sometimes killed because it is thought to prey on newborn cattle. Raccoons and foxes are natural predators.