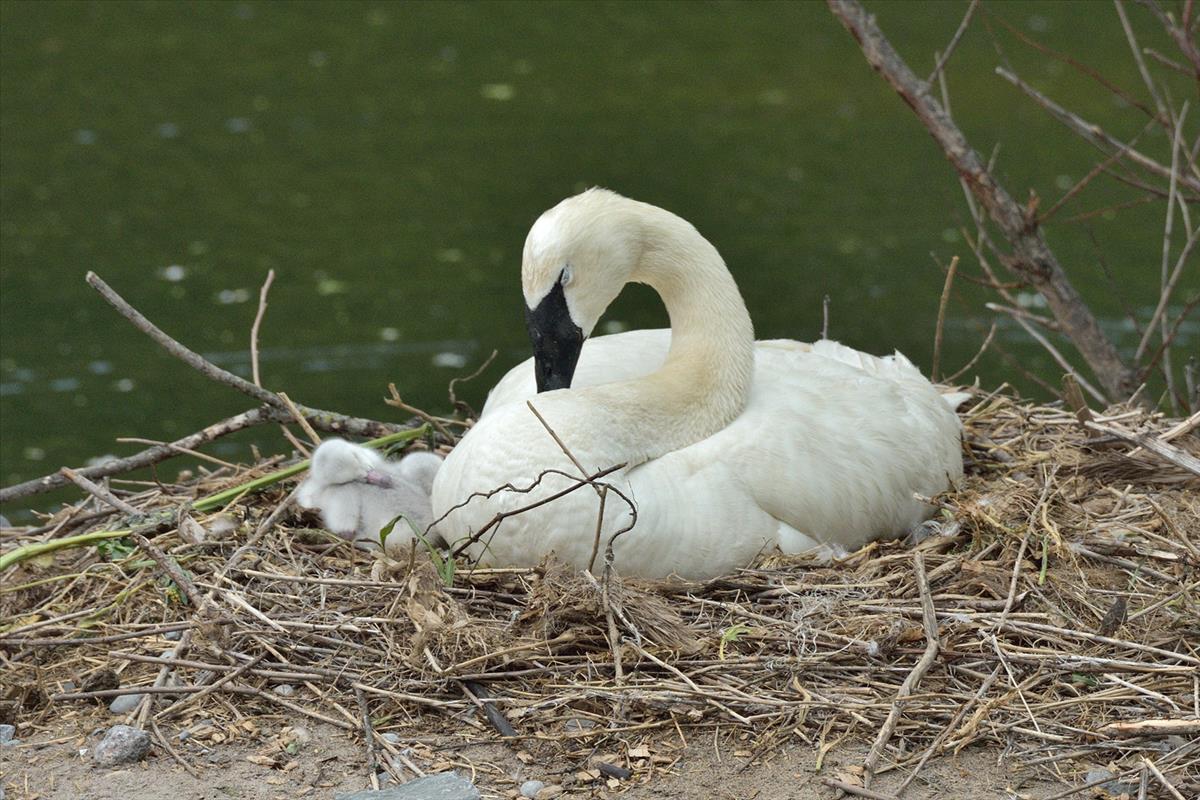 The trumpeter swan is the largest of all wild fowl. Adult trumpeter swans have snowy, all white plumage. The more subdued coloring of the cygnets (juveniles) is a dull mouse grey. Trumpeters have remarkably long necks, as long as their bodies held out thrust in flight but proudly erect when attentively swimming. A dark spot in front of the eye means that the bird is either a whistling or trumpeter swan. The trumpeter’s call has been likened to the sonorous notes of the French horn. Many trumpeters have their white heads and upper necks stained a rusty color from contact with ferrous minerals in the soils of the marsh bottoms during search for food. Males are generally larger in appearance weighing up to 11.8 kg and reaching a length of 1.8 metres. Females weigh 9.1 kg.

Historically, trumpeters occupied large areas of North America. Several major human influences impacted severely on their distribution. They were captured and killed in great numbers. Many captured birds kept alive were released (inadvertently or not)) by nomadic peoples and occupied new territories, but in very small numbers. Bones of these birds are evident in excavations all the way to the east coast. These may or may not have been captive birds. As settlement of the west continued across America, great numbers of these elegant birds were slaughtered. Distribution became limited to very small pockets of extremely few birds across the continent.

Several very dedicated organizations and individuals are responsible for bringing this magnificent bird back from the brink of extinction. The existing distribution greatly differs from the extensive historic one. They are currently found throughout southern Alaska and at various sites in Canada, Wyoming, Oregon, South Dakota and Minnesota. They winter along the coast of British Columbia and in Yellowstone National Park.

Various sites were selected for restoration programmes, the Toronto Zoo being one of them. Many of the birds released from the Zoo return to overwinter. Many offspring have been produced on site. The Wye marsh near Midland Ontario joined the restoration programme in 1998 and currently monitor approximately one third of Ontario’s trumpeter population. At present, records have confirmed that there are 1000 individuals in Ontario and an estimated 131 breeding pairs.

For most of the year the trumpeter inhabits lowland rivers, lakes, ponds and fresh water marshes. The trumpeter swans of Central North America stay in the same area all year. The Alaskan population is migratory and in autumn flies east and south to warmer climes.

The diet of the trumpeters includes a variety of marsh and aquatic plants composing the bulk of food consumed. Where they occur, tubers of duck potatoes and sage pondweed are consumed. The stems and leaves of sage and other pondweeds, water buttercups, water milfoil, musk grass, water weed and duck weed are all taken in quantity. Seeds of yellow pond lily, water shield and sedges are next in importance.

When they are two to three years old, trumpeters choose mates during highly vocal courtship displays. In one such display, called the “triumph ceremony” the male and female face each other, raise their wings and call loudly. Mated swans usually stay together for life. Territories are staked out as early as February. Nests are constructed by both in water 0.3 to 0.9 metres deep. Marsh plants are uprooted by the males and the female tucks the material in place. The nest mound reaches a diameter of 1.8 to 3.6 metres, and an average height of 46 cm. The clutch size averages five to six white eggs. The female incubates the eggs while the male fiercely defends and protects the nest. Incubation is approximately 32 days. The fledgling period is three to four months. Both parents are attentive to their young, the family forming a tightly knit group with the young actively swimming and feeding flanked by each parent. Males: cobs, females: pens and young: cygnets.

Trumpeter swans are well adapted for the harsh environments in which they sometimes live. Their unusually dense layer of down, which can be up to five cm thick, seems to make them almost impervious to the cold. It is not unusual for trumpeter swans to tolerate extended periods with temperatures as low as -30°C.

It will by the very fact of its size, fiercely and aggressively ward off potential predators. They have a very unique behavioural adaptation. Adult trumpeters have been observed thrashing the water with their feet and wings when cygnets are small. One theory is this frightens snapping turtles that would predate the cygnets. No other species of swan does this. The swan’s exceptionally long neck enables it to forage for food at the bottom of ponds.

After a dramatic decline in numbers during the 18th and 19th centuries due to human predation the trumpeters are making a slow recovery. These swans were killed for their feathers, skins and meat. Loss of habitat was extensive. As late as 1925 it was believed they belonged to a vanishing species. Fortunately they are now protected by federal, state, and provincial laws and are making a recovery in designated conservation areas. Contaminated water in nesting areas affect survival of the cygnets and breeding capabilities of adults. They have many predators; eggs are taken by ravens, bears, raccoons, wolves, and river otters. Cygnets are taken by these same predators as well as snapping turtles, great horned owls and mink. Nesting swans and larger cygnets are also preyed upon by eagles, bobcats, fox, and coyotes. European carp, an introduced species is a major competitor for aquatic vegetation on which they feed.