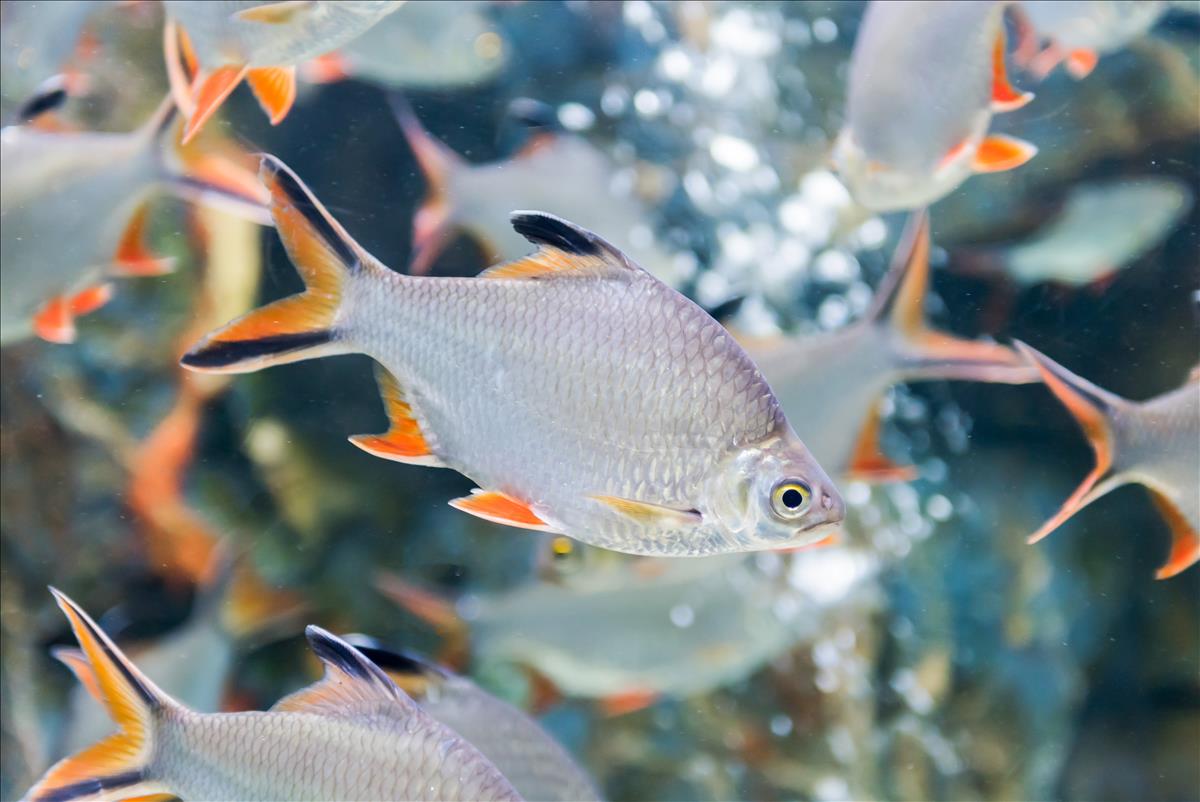 The tinfoil barb has a notable red dorsal fin with a black blotch at its tip. Their pectoral, pelvic and anal fins are also red. Large individuals are silvery or golden yellow in colour. Their common name (tinfoil barb) is derived from the “tin-plated” look of the scales. They can grow up to 35 cm in length, but more commonly 20 cm. No discernable differences exist between males and females. Albino, glass and golden tinfoil varieties exist. There are also blue, pink, purple, and orange colour forms. These variations are the result of selective breeding, and have been created for the pet trade.

Southeast Asia: the Mekong and Chao Phraya river basins, Malay Peninsula, Sumatra and Borneo. They have been successfully introduced to Taiwan.

Freshwater: found in medium to large rivers, streams, ditches, canals, and even flooded fields. They are benthopelagic (fish having neutral buoyancy), which allow them to float. They range from the bottom to the middle layers of the water column.

Tinfoil barbs are mainly plant eaters (herbivores), consuming aquatic macrophytes (plants large enough to be observed, as opposed to phytoplankton - those that are microscopic in size). They also eat submerged land plants, as well as algae and occasionally insects. They will also feed on smaller fish, worms and crustaceans opportunistically.

Tinfoil barbs migrate back to their natal spawning ground to reproduce. They are an egg-scattering species, so they do not care for their eggs after spawning. Female tinfoil barbs can produce several thousand eggs per spawn. They have a lifespan of 20 years.

Tinfoil barbs are good swimmers and are a schooling species. “Schooling” behaviour has several advantages. To potential predators, a school might appear to be one large fish. As well, schools provide "safety in numbers" - predators simply cannot consume them all. The sheer number of fish in a school allows individuals to hide behind each other, thus confusing a predator by the alteration of shapes and colours presented as the school swims along.

Over-collection in their native habitats as well as pollution may, at some future date, pose threats to these fish. Tinfoil barbs have not been evaluated by the IUCN, but because they are commercially important in the aquarium hobby trade, commercial aquaculture and subsistence farming - they are currently not at risk.