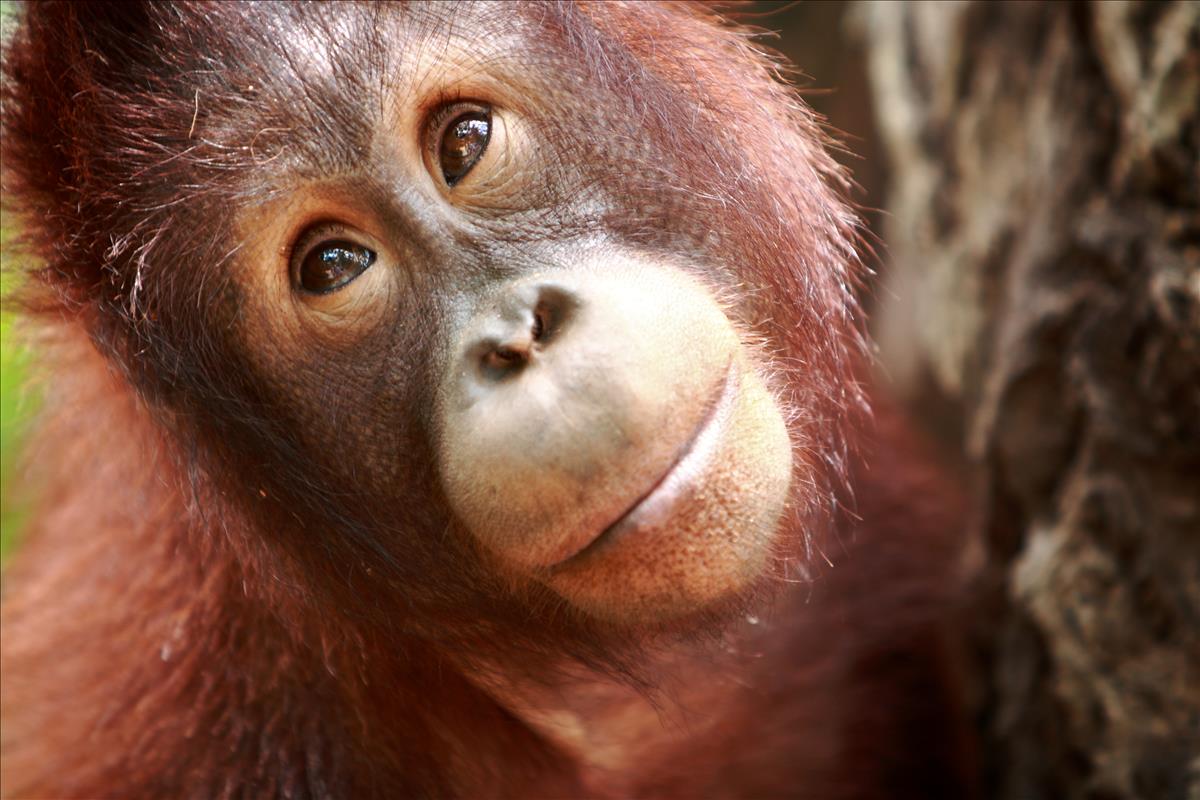 The orangutan is covered by coarse reddish-brown shaggy hair except for the face, ears, and throat which are bare. Between childhood and middle age the skin varies in colour from dark beige in the younger individuals to dark grey in the adults. The orangutan has a strongly built body. The head is set on a very thick neck. The abdomen is round and protuberant, a sexually mature characteristic. The arms are long and powerful and reach to the ankles when the animal stands erect. The hands are long and narrow as are the fingers. There is a small thumb on each hand that is opposable to the first digit. The legs are relatively short, bowed at the ankles, and are not quite as strong as the arms. The big toe is very short and the long narrow foot, which is articulated obliquely to the leg, is longer than the hand and is longer than any other ape's hand. Orangutans are sexually dimorphic; males are much larger and heavier than the females and the mature male adults are also identified by large cheek flanges and pronounced throat pouches. The forehead on the orangutan is high and the snout bulging. The ears are small and flat. The lips are broad and extremely mobile, when eating and drinking the animal can thrust them quite far out. The lower jaw retreats from below the lips. Like humans, the orangutan has a set of 32 teeth with two much larger canine teeth.

The island of Sumatra.

Orangutans are omnivorous; they eat both plants and animals. Though their item of choice is fruit, they also feed on leaves, nuts, shoots, insects, eggs, fish, and young birds when they can catch them.

Orangutans are semi-solitary. They live alone, in pairs or in small family groups – the mother and baby and maybe one sibling most of the time. Nearly all males live solitary lives except during mating sessions. The home range of an adult male usually overlaps the ranges of several adult females. Orangutans are not territorial. Most animals in a given area appear to maintain a loose relationship, although adult males are hostile to one another. Females in estrous are more likely to yield to the adult males they find most attractive. The female estrous cycle averages about 30 days. She gives birth to a single young (twins are known, but rare) which is born after a gestation period 233-265 days. The infant weighs 1.6 - 1.9 kg at birth and is totally dependent on its mother. Orangutan mothers are very caring and attentive. The newborn is cradled by its mother’s hand and arm. The baby clings to the ventral surface of the mother until nearly a year old. It progresses to riding on its mother’s back and may continue to do so until two and a half years old. Weaning is usually completed at three or four years, but the mother feeds the infant with thoroughly pre-chewed food at an early date. At one year of age the young orangutan is able to eat solid food. At four years old, the youngster becomes independent, but will spend the next two to three years with its mother before taking off into the rainforest on its own. A single young is usually born about every six years. Females do not conceive during the three to four year nursing period. Orangutans have a slow growth rate, somewhat comparable to humans. Males do not attain full physical and social maturity and hence reproductive capability until 13-15 years or more. Females invest a great deal of time in raising their babies and as a result are only likely to bear four or five babies during their entire lifetime. The interval between births is the longest for any mammal. The life span of the orangutan in the wild is around 30-45 years.

Orangutans are highly intelligent and have learned to use tools. Sticks are used for a variety of purposes. Leaves are chewed and then wadded to make a sponge to soak up water from rain-filled plants. They form gloves from leaves when climbing prickly surfaces. When it rains very hard the orangutan makes an umbrella for itself out of the big leaves of diptocarp trees. Being long-lived, males develop great awareness of the various locations of fruiting trees. Females, pre-occupied with raising their young avail themselves of this knowledge by occupying the same general area as the mature male. They are uniquely adapted for their arboreal lifestyle. Long arms and long, hooked hands permit orangutans to reach distant branches and to employ a "hook grip", its principal grip in locomotion. They have opposable thumbs. This interdigital grip allows them to pick fruit or grasp slender branches. As well, the big toe is also opposable, the grasping feet often lending extra support on the lower branches. The feet are really like hands, they are referred to as having four hands instead of two hands and two feet. In combination with their tremendous strength, this gives the orangutan the remarkable ability to swing through the forest treetops, and even hang upside-down from branches for long periods of time, in order to retrieve fruit. They are able to make trees sway in order to cross large gaps. Walking on the ground is slow and deliberate. They walk on all four limbs, using the knuckle pads on the back of the digits of the hands. Orangutans are diurnal, (active during the day). They build nests each night in which they sleep. The nests are made out of leaves and branches, simply folded over vegetation, without weaving or knotting and sometimes as much as 30 metres above the ground. Orangutans are usually silent. Adult males make a "long call", a series of loud groans that can be heard up to one km away. This is probably a warning to other males to stay away.

The main threat of orangutans today is loss of habitat. Forest habitat is being rapidly destroyed by conversion to agriculture, both by large commercial plantations and smaller subsistence farms, illegal logging, gold mining, and in particular palm oil plantations. At the same time, humans are selectively killing adult females in order to obtain live juveniles for the animal pet trade.