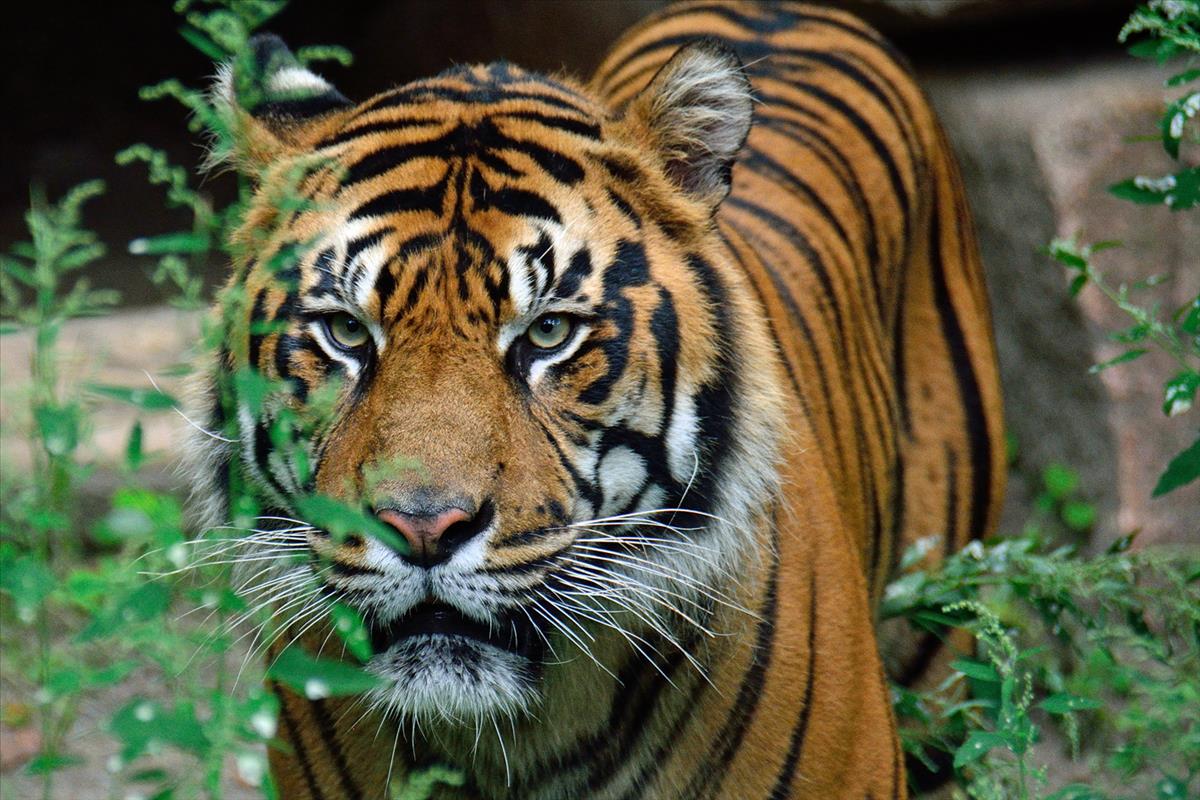 Sumatran tigers are the smallest of the living subspecies. They are a darker orange than other tigers, ranging from reddish-yellow, through to a deep orange, and on into reddish-brown. They have more stripes than other tigers. The black vertical stripes are narrower and a little closer to each other sometimes over-lapping. Striping occurs on the legs. The tail is usually slightly shorter than half of the body length. The chest, muzzle, throat, stomach and insides of limbs are white to cream in colour. The back of each ear is black with a central white spot. The neck has a short mane. They have yellow eyes with binocular vision. The muzzle is broad with large canine teeth. The whiskers are long.

The island of Sumatra, Indonesia. Sumatran tigers are distinctive for being the only subspecies to live in isolation on a large island, Sumatra, Indonesia. They have been isolated from their cousins on mainland Asia for something like 10-12,000 years; which occurred after a rise in sea level.

Tropical rainforest near rivers or swamps. Sumatra provides a varying landscape in which this subspecies lives, from peat-moss forest, submontain and montain forest as well as lowland forest. As a result, the Sumatran tigers' coat has evolved slightly different from the other tiger subspecies.

They are carnivorous, feeding on many different species of deer and wild pig. They also feed on reptiles, birds, fish, berries, and carrion. Occasionally, they will kill a rhino or elephant calf.

Tigers are solitary and only come together to mate. They communicate by rubbing heads, roaring, purring, and grunting. Tigers can breed at any time of the year, but they usually mate in winter or spring. They may remain together for five to six days after which the male moves off and the female is left to raise the young by herself. Females come into estrous on an average of 52 days and the gestation period is approximately 103 days. Females give birth to a litter of two to three cubs. At birth, the cubs are helpless and blind, weighing only about 1.5 kg each. They open their eyes at two weeks. During the first eight weeks the cubs consume only their mother's milk. They are suckled for five to six months. The cubs leave the den for the first time when they are two months old. They are wholly dependent until they are about six months old when they learn how to kill. They can hunt for themselves by the time they are about 18 months old and are fully independent at two years of age. The litter stays together for two to three years and the young are sexually mature at three to four years. Tigers usually reproduce once every three years. In the wild a tiger can be expected to live 15 years.

Tigers are mostly nocturnal. They rest during the day in the shade, but at dusk they begin to roam through their range and may travel more than 32 km in a night. The smaller size of the Sumatran tiger makes it easier for the cat to move quickly through the jungle. This subspecies has extremely long whiskers which form effective sensors when moving through the particularly dense undergrowth of this tiger's habitat. They are used as feelers to help it maneuver through twigs and branches in the dark. Their keen eyesight picks up even the slightest movement. They patiently stalk prey through often dense cover until close enough to pounce. Large prey are bitten in the throat and usually die from suffocation. Smaller animals are killed with a swift bite to the back of the neck. The carcass is then dragged to a secluded area where it is consumed. Tigers have long sharp retractable claws for catching and holding prey. The claws are pulled into a protective sheath to prevent them from becoming worn down while walking on rocks or hard ground, keeping them very sharp. The tiger's patterned colouring is an adaptation for camouflaging the animal in its natural habitat. The black lines serve to break up their body shape in tall grasslands, helping them to hide from sight. They have extremely flexible bodies; bones are attached to the muscles and tendons without strong ligaments. The tiger's large, cup-shaped ears focus sounds, making its hearing very sensitive. The white spots on the back of tiger's ears are called "eye spots" or "predator spots". These spots are believed to function as false eyes as well as to make it look larger to any predator approaching from behind. This is particularly helpful in keeping cubs safe. Like a human fingerprint, no two tigers have the same pattern of stripes on their coats. The tiger's sense of smell is also excellent. Sumatran tigers are known to be very efficient and fast swimmers. If given the chance the tiger will run hoofed prey into the water where the animal is at a much greater disadvantage because they cannot swim well with their long thin legs. Not all hunts are successful and as a result a tiger compensates by being able to eat a large amount of food at one time. Tigers establish and secure their territories by marking the boundaries with urine and feces. Once a territory is established, it will remain with that tiger until its death. Both males and females have their own hunting territories. The territory of a single male can overlap with those held by several females. A male will not usually tolerate other males staying in his territory unless they are just passing through. The tiger's range varies depending upon the terrain and the availability of prey.

Sumatran tigers are endangered because of the loss of habitat due to the expansion of the human population, and the logging of forests. As well, the elimination of natural prey and the poaching for tiger parts are threats to survival.