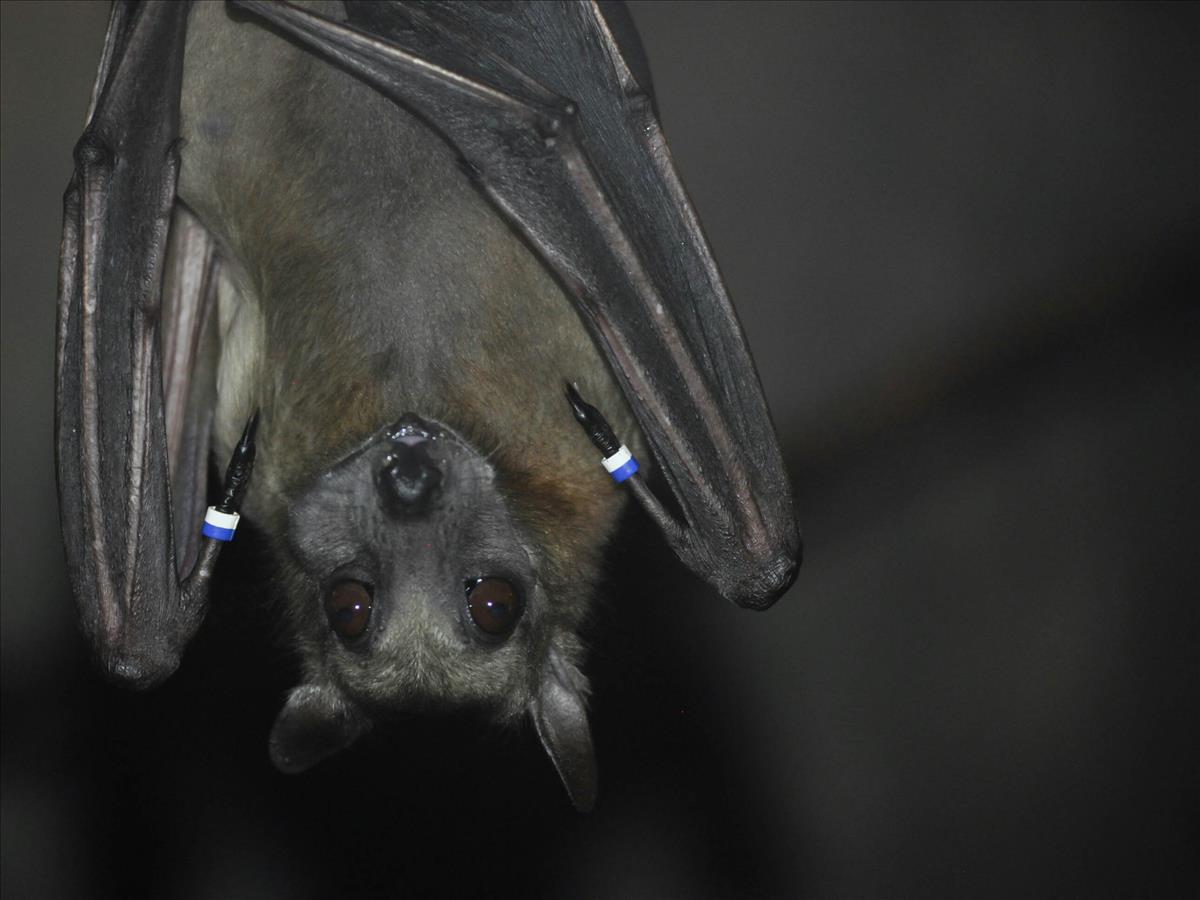 These bats are yellowish-brown to tawny on their necks and backs, with olive to brown on their undersides. There is an orange ruff of fur on the males. These second-largest African fruit bats have pointed heads, large eyes and large ears. Their long tapered wings are black, ending in a pointed tip. They also have large cheeks with pouches to store food. Their bodies measure between 14 and 22 cm with a short tail of 4 to 20 mm. Their wingspan can be an impressive 76 cm or greater. They weigh on average 230 - 350 g.

Africa, south of the Sahara, north into Ethiopia and Egypt, as well as southwestern Arabia.

They can be found in a variety of habitats - forest, rainforest, savanna, desert, or dry arid regions, from sea level to 2000 metres. Prefers tropical forests due to the proximity of food sources. This species usually roosts in tall trees by day, but can also be found in caves.

Juices of various fruits are their preferred food, including, but not restricted to, dates, baobab flowers, mangoes, pawpaws, avocado, figs, and passion fruit. This bat also feeds on blossoms and perhaps young shoots of the silk cotton tree, and will also eat into soft wood and bark probably to obtain moisture. They hang by the phalanges on their feet in order to suck the juice out of the fruit and discard the pulp.

Reproductive cycles are geared to rainfall patterns, so young are weaned when conditions are optimal and food is plentiful. Mating occurs from April to June, when the dry season begins. However, unless conditions are ideal, implantation can be delayed in most populations. The gestation period can be as long as nine months, although the embryo takes only four months to develop.

Birth occurs in February and March when the females give birth to one pup weighing about 50 g. Although there are many births at the same time in a colony, there is no record of cooperative care amongst the mothers or of paternal involvement in looking after the young. The pups are altricial, unable to fly and dependent on their mothers. They nurse on rich milk for up to four months until they become able to forage on their own. Weaning then occurs at the peak of the wet season when food is abundant. Sexual maturity is reached at about two years. These bats can live up to 15 years in the wild, longer in captivity.

Straw-coloured fruit bats have very strong wings that enable them to fly up to 200 kilometres in search for food and are known to migrate annually in response to seasonal rainfall patterns. They fly in straight lines and at higher altitudes than other fruit bats. They move northward with the rain, finding greater food availability, and then south again at the end of the rainy season. Colonies can number up to a million animals and they migrate together. Sometimes even greater numbers of fruit bats will be seen on migration routes. They are very social mammals. Roosts of fruit bats are generally around 60 km distance from each other. They are known to return to the same places where they have found food previously year after year. Their acute sense of smell and large eyes allow them to be successful nocturnal feeders. They leave the roost in small groups and forage up to 30 km away. They are equipped with cheek pouches in order to be able to carry away food to be eaten farther away from other members of the group. Although they are primarily active at night, they do move around their roosts in tall trees as they rest during the day. They are agile flyers, but are also able to get around on the ground. They are noisy creatures, seeming to communicate through vocalizations, and perhaps also through touch as they are found in such large groups. They are known to be noisy eaters.

Eidolon helvum is the most heavily harvested bat for bushmeat in West and Central Africa, and this is believed to be a major factor in reported population decline. They are also hunted for causing damage to fruit crops. On the Ivory Coast, fruit bats are considered pests for chewing the bark and leaves off trees, causing many deaths, particularly in the introduced pineapple plantations. They may also eat and destroy dates to such a degree that they are hunted and killed. As well, people hunt them because of superstitions surrounding their musky odours and chattery noises. Other predators may include owls, eagles, snakes, and civets.