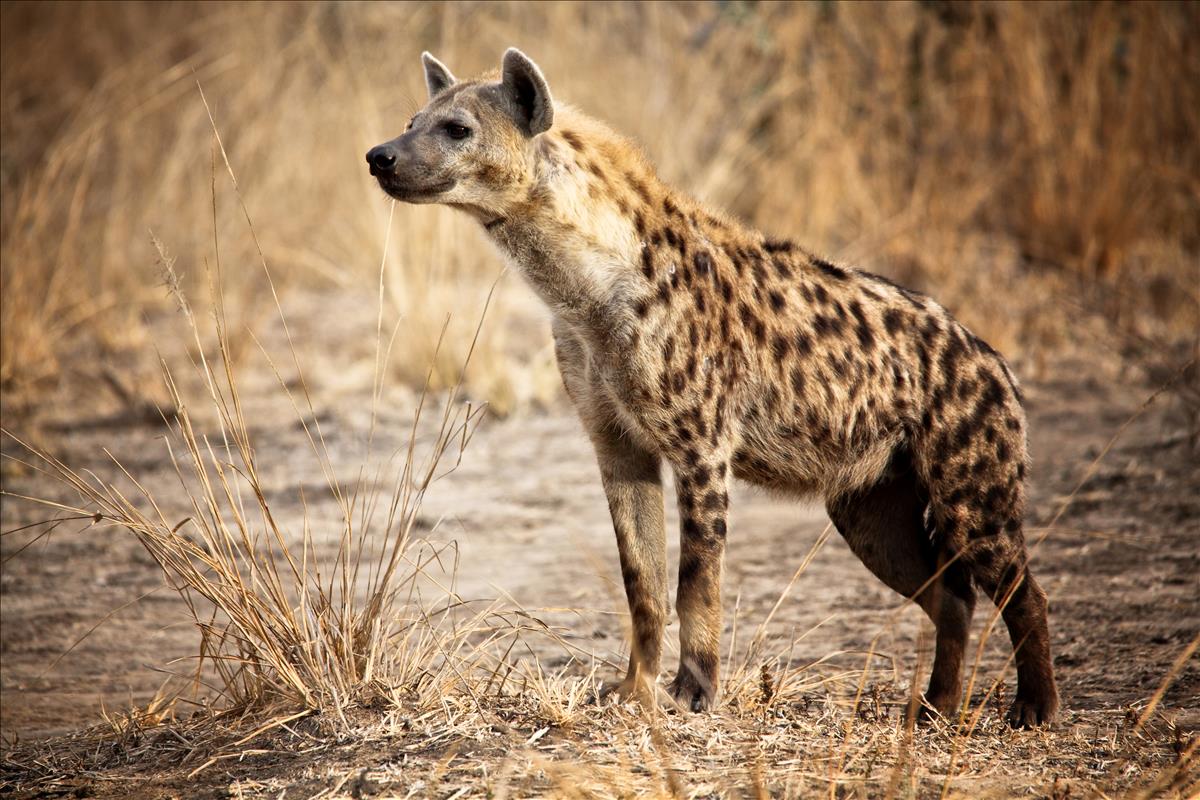 The spotted hyena is the largest member of the hyena family. It has a large, powerful head, slender legs and a sloping back. Their forequarters are more heavily built than their hindquarters. The fur is coarse, woolly, and a yellowish-gray to brown colour. The head and feet are a lighter brown than the rest of the body and irregular dark spots are scattered over the whole body. Its tail is short and bushy, and a short mane covers its neck and shoulders. On average, females are 12 cm longer and 6 ½ kg heavier.

Hyenas are a family of their own, the Hyaenidae. They're more closely related to cats than dogs, but their closest relatives are the Herpestidae – which include mongooses, and meerkats.

Africa south of the Sahara.

Spotted hyenas are not seasonal breeders and can reproduce at any time of the year, though a birth peak does occur during the wet season. Females are polyestrous, with an estrous period lasting two weeks. The average litter consists of two cubs, with three occasionally being reported. Mating in spotted hyenas is a relatively short affair which typically only occurs at night with no other hyenas present. Males will show submissive behaviour when approaching females in heat, even if the male outweighs its partner. There is no permanent pair bonding.

After a gestation period of 90 - 130 days one to three young are born, usually two, in a burrow or den. At birth they weigh 1.5 kg. Eyes are open and some teeth are already present. Each clan has a single central denning site, where all the females give birth to their cubs, but each mother suckles its own (no cooperative rearing of the young). The young are suckled for 12-18 months, after which time they are nearly full-grown and will join the hunting pack. Sexual maturity is reached at two years of age for males and three years for females. Hyenas live on average 12 years; maximum 20 to 25 years.

Hyenas are sociable animals living in packs, or clans of 10 - 30 individuals, and sometimes as many as 100. Each clan occupies its own territory, the boundaries of which are carefully guarded and marked with urine, droppings, and anal-gland secretions. Clans are usually divided into smaller hunting packs. Within any group of hyenas, females are dominant over males. Each clan is a stable community of related females, among which unrelated males reside for varying periods. Females remain in their natal clan for life, but the males will leave around the time of puberty to temporarily join together in a nomadic group. Males will subsequently settle in a new clan, remaining in it for a few years before departing again. Within a clan there is a separate dominance hierarchy for each sex. All resident males have been observed to court females, however, the highest-ranking male was observed to successfully mate.

Hyenas sleep in burrows, which they dig themselves. Alternatively, they rest among tall grass or rocks. They emerge at dusk, activity is mostly nocturnal or crepuscular. Hyenas can travel up to 80 km in a single night. The hyena is primarily a hunter, not a scavenger. Far more animals are killed than are consumed as carrion. Up to 15 kg of meat can be consumed in one meal, which is about one third of their body weight. Following a kill, a feeding hierarchy ensues: females eat first, followed by males, followed by cubs.

They have immensely strong jaws that can crush and chew up bone, as well as special teeth for cutting hide and tendons. Hyenas devour every part of their prey and have very acidic stomach secretions to digest it. Their droppings are white and crusty because of all the powdered bone in them. Indigestible items like horns, hooves, and hair are regurgitated in pellets.

Hyenas hunt cooperatively in packs. The prey is often brought down by a bite in the leg and then torn to pieces by the pack while it is still alive. They have large front paws for holding down a carcass while they tear off the meat, and strong forequarters for carrying off large hunks of meat and bones. Hyenas can chase their prey for up to five km, running 40 - 50 km per hour. Roughly one third of the hunts are successful.

They are very vocal animals, and produce a number of different calls. Generally, high pitched calls signify fear or submission, while low pitched calls accompany a high tendency to attack. The loud "whoop" is a characteristic sound of the African night, and is audible for over five km or more. It is a rallying cry, which varies in speed and pitch according to the urgency of the situation. Spotted hyenas also whoop to show off as individuals; the rate and style being an indicator of social status. Because of this, spotted hyenas whoop singly rather than in chorus as wolf packs do to display their collective strength. Although males tend to whoop more than females of similar rank; dominant females will engage in the longest bouts of whooping. Giggles and grunt-laughter tend to be emitted in situations of great excitement. They are also known as laughing hyenas. The giggles, yells and grunts which accompany mass feeding tend to be directed at competing individuals at a carcass, and have the secondary, disadvantageous effect of attracting lions and other spotted hyenas. The pitch of the laugh indicates the hyena's age, while variations in the frequency of notes used when hyenas make noises convey information about the animal's social rank. Soft grunts are made by females calling their cubs. When attacked, spotted hyenas will emit loud growls and whimpers.

They also use body language as a form of communication and have a complex set of postures. When afraid, the ears are folded flat, and are often combined with bearing of the teeth and a flattening of the mane. When attacked by other hyenas, or by wild dogs, the hyena lowers its hindquarters. Before and during an assertive attack, the head is held high with the ears cocked, mouth closed, mane erect and the hindquarters high. The tail usually hangs down when neutral, though it will change position according to the situation. When a high tendency to flee an attacker is apparent, the tail is curled below the belly. During an attack, or when excited, the tail is carried forward on the back. An erect tail does not always accompany a hostile encounter, as it has also been observed to occur when a harmless social interaction occurs. Although they do not wag their tails, spotted hyenas will flick their tails when approaching dominant animals or when there is a slight tendency to flee. When approaching a dominant animal, subordinate spotted hyenas will walk on the knees of their forelegs in submission. Hyenas also have excellent eyesight and smell, and acute hearing.

The hyena is considered to be a predator of domestic livestock and game, and has resulted in them being hunted, trapped and poisoned. The degree with which spotted hyenas impact livestock varies from region to region. There is a continuing decline in populations outside protected areas (and even within some protected areas) due to persecution and habitat loss, although this is not sufficient to warrant listing in a threatened category.