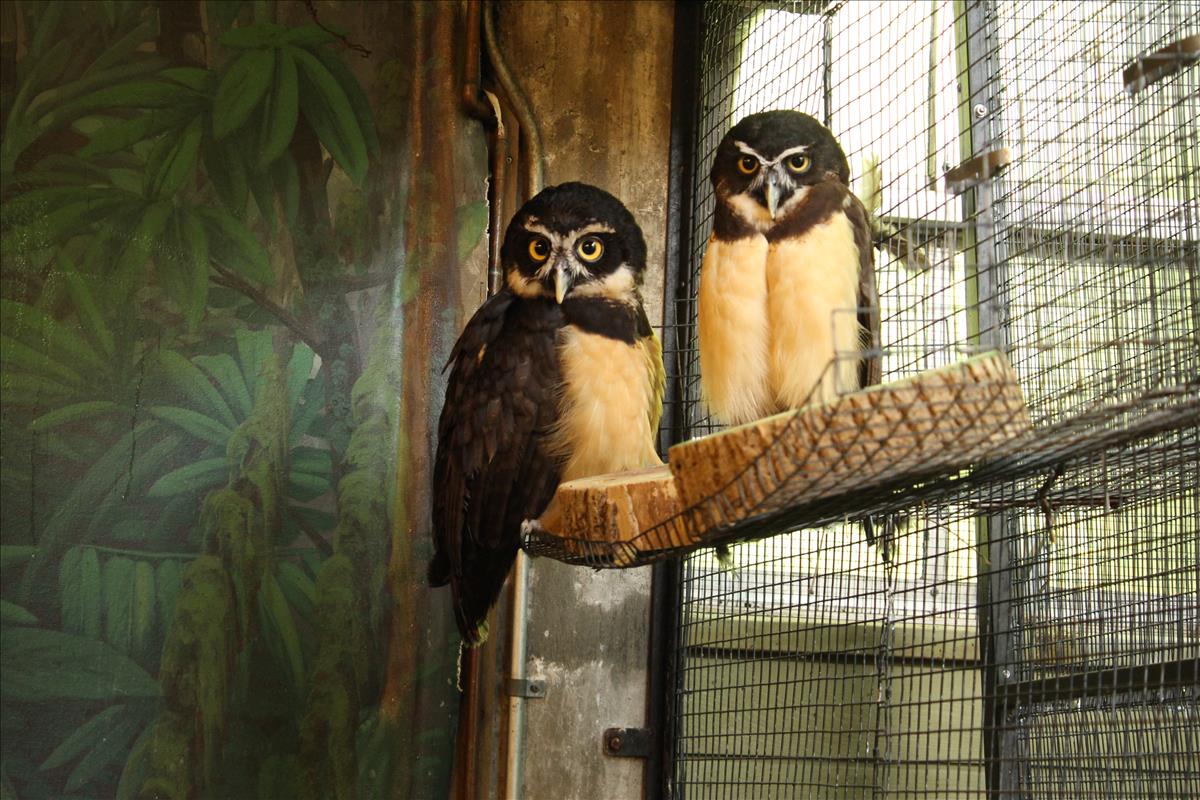 These large owls have dark heads and backs with buff colored fronts. They have no ear tufts. Spectacled owls have an unmistakable face pattern. Light circles around their yellow eyes give them the appearance of wearing spectacles, thus their name. Juveniles are even more striking, often called white owls by local populations. They have white bodies and heads, dark brown wings and brown to black facial masks. The spectacled owl stands approximately 41 to 48 cm and weighs 590-950 g. As with most raptors the female is larger than the male.

The range of spectacled owls reaches from Mexico, Central America, south to South America as far as Paraguay, south Brazil and northern Argentina.

Spectacled owls occupy a variety of habitats from thick, humid rainforests to open woodlands and mangroves. They have been observed at elevations of up to1,200 m but they predominantly live at lower elevations.

In the wild these owls prey on insects, frogs, reptiles, birds, small mammals, even crabs. At times they will tackle skunks and opossums.

Nesting can occur from January to August. Spectacled owls are cavity nesters seeking out holes in trees. Clutch size is normally two white eggs with incubation lasting about 36 days. Approximately six to eight weeks after hatching fledglings are ready to take their first flight. Both parents continue to take care of their young after they leave the nest. In captivity juveniles take up to five years to acquire adult plumage. It is assumed that this process is sooner in the wild.

Like all owls, this species has the ability to fly with minimal sound, has extremely acute hearing and the raptors usual tools of grasping talons and beaks adapted for tearing prey.

Owls do not have many predators. Sometimes larger birds of prey will attack them. Eggs and chicks are more vulnerable. The gradual disappearance of tropical forests is an imminent threat. Human caused changes in land use are escalating. Vast forests are being removed for timber and paper products and industrial emissions create pollution. Critical shorelines and riparian zone habitats are expanding human communities and consequently agricultural needs.