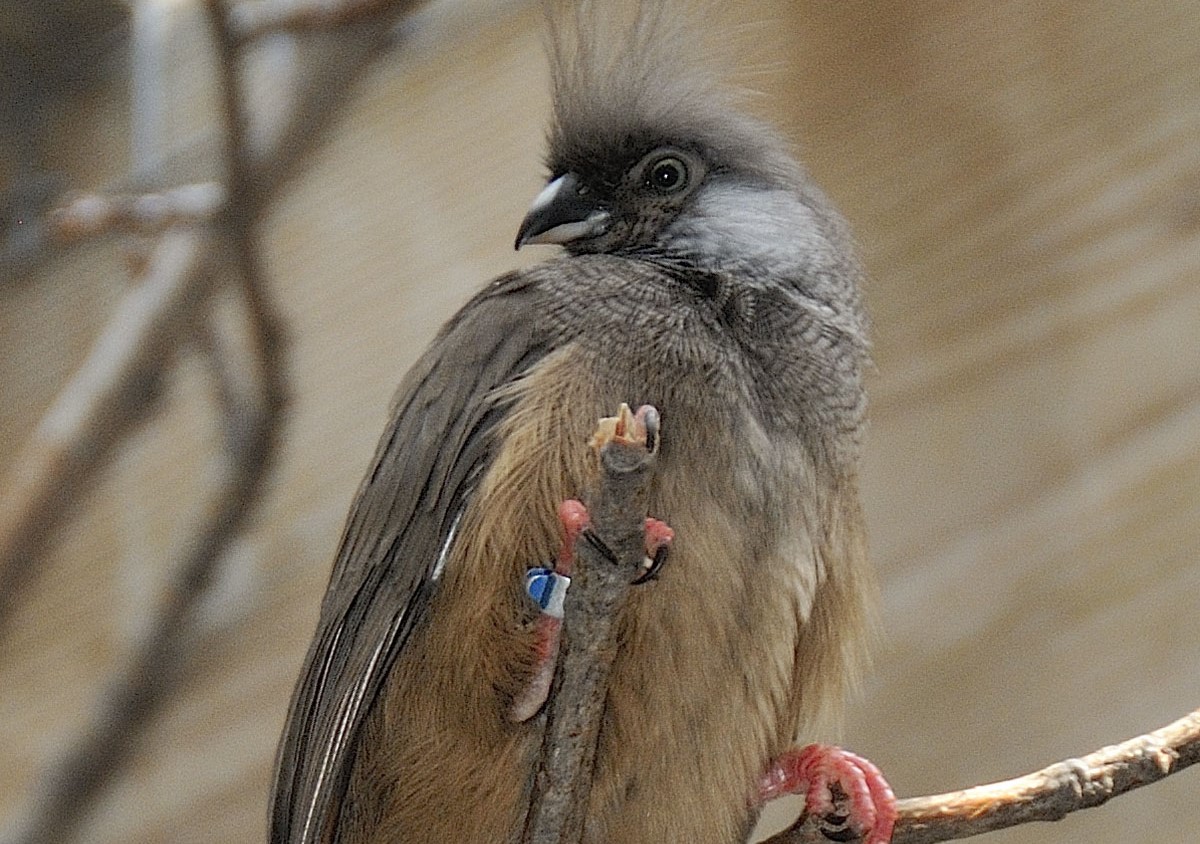 Striatus translates as ‘striped’, which may be a better descriptor for this mousebird than ‘speckled’ since the chest, throat, cheeks and nape are very finely barred. True to its name however, its uppers are a mousy brown. Buffy underparts provide the only splash of colour. The underwing is brownish with grey tips to the flight feathers. Starting with the shaggy, wispy crest, the body has an unkempt appearance with its fluffy, hairlike feathering. Both the crest and the ear coverts are pale brown, though they appear dull white. The forehead, lores and throat are dark brown to blackish. A strongly decurved bill has a black upper mandible and a white lower one. To complete the head, dark-brown eyes are surrounded by a blackish eye ring of bare skin. Half of this mousebird consists of mousy-brown tail. Its feathering is so soft, the tail is often damaged.

Just about all of sub-Saharan Africa south of a line from Nigeria across to Ethiopia.

The speckled mousebird likes any habitat except rainforest and very arid areas. It is widespread in savanna, scrubland, open woodlands, riverine woodlands, and bushveld (grass plains dotted by dense clusters of trees and tall shrubs). It has taken to towns; enjoying gardens, parks and orchards. Found from sea level to 2100 metres.

This is an omnivore that forages in the mid to upper canopy, feeding primarily on fruit. As well as fruit (both ripe and unripe), it consumes berries, leaves, buds, blossoms, seeds, and the nectar of various aloe plants. To add protein, it will search out termites and ants.

Since they inhabit more arid areas, speckled mousebirds may breed any time there is enough food available. Courtship involves calling, preening, exchanging food and hopping or bobbing up and down.

About three metres off the ground, prospective parents build a large and untidy cup-shaped nest of grass, herb stems and twigs lined with softer materials such as plant down, spider webs, cloth, and wool. The clutch size is usually two or three and incubation lasts about 18 days. Juveniles from previous clutches usually assist with incubating and feeding.

Born altricial, hatchlings open their eyes by Day 3 or 4, when quills for the primaries and retrices (long steering feathers of the tail) appear. Parents feed regurgitated plant material. By Day 9, chicks are well feathered, gaining agility and soon leaving the nest temporarily. They are also learning to socialize (by preening) and to manipulate food with their feet. By Days 15 to 17, they begin to attempt to fly. Around Day 28, young mousebirds are moving into adulthood as they start to forage for their own food as well as calling and chattering like grownups. Adult plumage is complete after two months.

A very social species, speckled mousebirds forage, preen, dust-bathe, and play together. Flocking in groups up to 15 gives them an advantage against predators. In their arid environment, their food is often low in calories as well as being scarce at times. This has led to unusual social behaviors that save energy. Though most species of bird allow little or no touching, individuals may huddle together during the day or while roosting. More unusually, they hang belly to belly for warmth when sleeping. They may also sleep clustered tightly into a ball – 28 birds were observed on one occasion. When incubating, the helpers join the parents on the nest at night.

Torpor, sometimes called temporary hibernation, is a state of decreased physiological activity characterized by a reduced metabolic rate and body temperature (both great energy savers). On cold nights, Colius striatus can reduce its metabolism by up to 90%. Their bodies become cold to the touch. Though defenseless, the size of the massed group discourages nocturnal predators.

In the morning, sunbathing brings their temperature up to normal quickly. They fluff their feathers, spread their wings, stand as tall as possible and puff out their chest. Rotating, they preen in pleasure.
During the day, they spend a lot of time resting in order to save energy. However they still must find time to consume almost their body weight in their low-cal food. This may give them a pot-bellied look since this fibrous diet digests so slowly.

The survival rate of speckled mousebirds is worse than most bird species. Only about half the eggs hatch. And of those that do, only about half reach two months. However they are prolific egg layers.
When incubating, the parents alternate on the nest. The changeover is accompanied by a ritual display of beak opening accompanied by soft vocalizations. As well, they often present a leaf or other nesting material to the sitting bird.

A juvenile is sexually mature at around six months though copulation behavior may be practiced at just one month of age. However they don’t usually breed successfully until they reach one and a half years. By this time, they’ve usually left to join another flock. Colius striatus, particularly the young, engage in complex play activity. This involves items they find in their environment such as twigs and leaves. They also squabble and chase.

In the air, speckled mousebirds are not very graceful. They create quite the sight since they beat their wings rapidly while appearing off balance. And they finish off by crash landing into bushes or trees. Like other mousebirds, this species attempts to escape predators (snakes, carnivorous birds, and mammals) by flying into a thick bush or tree. It then freezes until the danger is past. Or, if the danger is prolonged, it may drop to the ground like a stone and scurry away. It is also referred to as a mousebird because it scampers through the branches like a mouse. Quite agile in trees, it climbs like a parrot, using its beak and legs. An acrobatic feeder, it sometimes feeds upside down, enabled by its strong claws, which also enable it to sleep in a hanging position next to a mate.

Many of the plants that mousebirds eat may be toxic to other vertebrates. The clay and dirt they ingest act as an antacid. Mousebirds also swallow pebbles as a grinding aid in digestion. As a contact call, the speckled mousebird issues a tsu-tsu. When sensing danger, this will change to tisk-tisk. They call in a series while raising and lowering their crest. Calls are twittering, almost laughter like, pleasant to our ears. In contrast, terrestrial predators are greeted with a loud shriek.

Urbanization has benefited the speckled mousebird because they like gardens. But when they dine on ornamental flowers or invade orchards, they become unwanted. Because of crop destruction, they are actively hunted. Pesticides are also a problem. Nevertheless this species is widespread and common except for central South Africa where its range is declining.