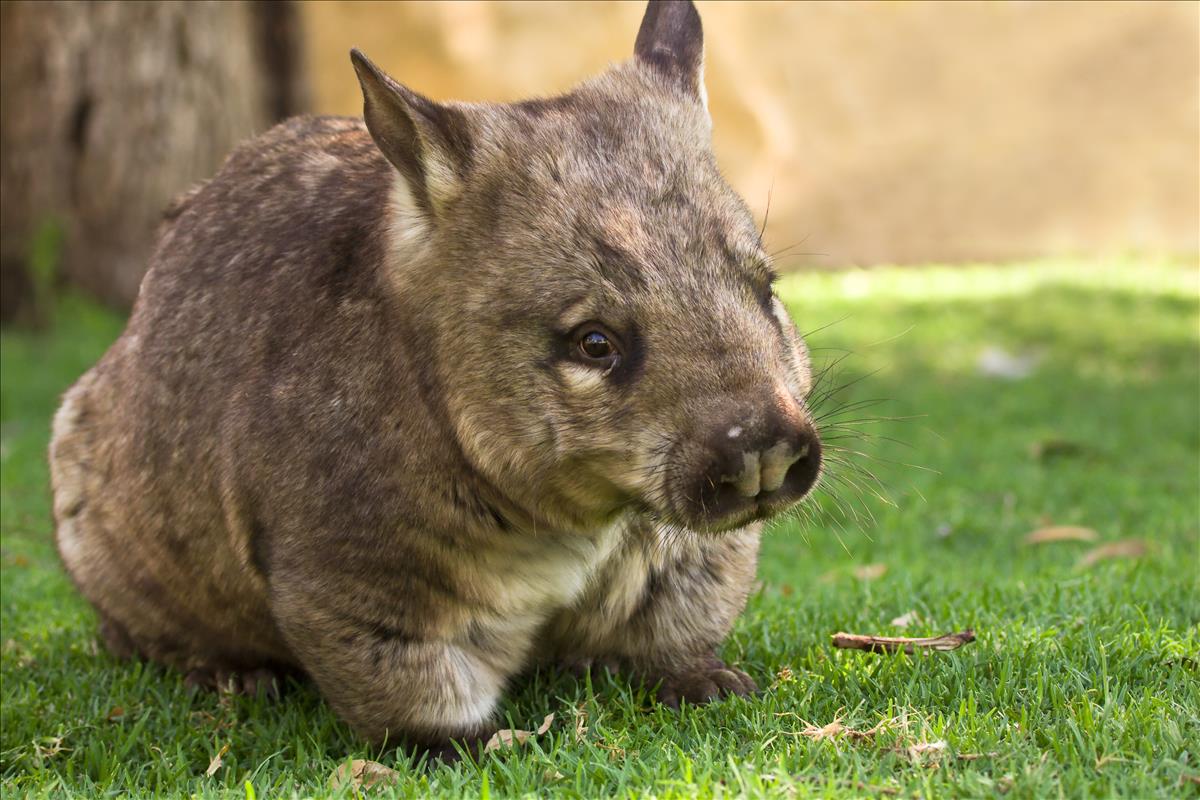 The southern hairy-nosed wombat is the smallest of the three species of wombats. They can be distinguished from the other species because the nasal bone is longer than the frontal bone. They have soft, usually white fur covering the area around the nostrils, giving the animal its name. The silky fur ranges in colour from grey to tan. They are stocky strong animals with powerful short legs. The tail is short and usually hidden by fur. The robust head is flattened with narrow pointed ears that extend over top.

They have five digits on each limb with flattened claws used for digging. All digits have 50 mm long sharp claws, except for the first digit. On the hind feet, the second and third toes have fused, creating a digit with two claws that the wombats use for grooming. Teeth grow continuously throughout their lives. The incisors are rodent-like; the palate between the molars is wide.

They live in burrows about three metres underground. The wombat's burrows can be up to 100 m long (the length of a tennis court) and have up to 23 entrances. They are the most social of the wombat species and 6 - 10 may live in one burrow system. Wombats can endure the driest of climates where yearly rainfall can vary from 7 - 52 cm. Temperatures underground remain constant at 21 ˚C. Types of plants found around the burrow are different from other areas as wombats act as gardeners of the desert. By frequent digging, enriching the soil with droppings and cropping of plants, they maintain grasses at early growth stages, and thus providing a supply of food for themselves.

They are grazing herbivores eating the growing shoots of mainly perennial grasses. Dietary intake varies with habitat. In severe drought they survive on straw like stubble.

Southern hairy-nosed wombats breed once a year, if optimal rainfall conditions prevail. They first breed after the age of two years. Mating can occur at any time of the year, but generally between September and December. During the breeding season, males are aggressive towards each other, biting the ears, rump, and flanks of other male wombats. Females ready for mating may emit a coughing call when they are pursued by males. After mating the male takes no further part in the upbringing of the offspring. The gestation period is 21 to 30 days.

The female has two nipples in the rear opening pouch, but usually has one young at a time, although twins are occasionally observed. At birth, the baby wombat is about the size of a jelly bean, weighing half a gram. It is born three or four weeks after mating and is naked and blind and has no back legs. It claws its way through the mother's fur and enters the pouch. Inside the warm, soft, moist pouch, it begins to suckle and its mother's teat swells up inside its mouth so that it cannot let go. The joey stays fastened to the teat for about four months. Its eyes open when it is four months old and at six months it puts its nose out of the pouch, but it will not go outside to explore for at least another month or two. At ten months it leaves the mother's pouch permanently and follows at its mother's heels for up to a year or more.

Although the young wombat begins to nibble grass when it is eight moths old, it continues to suckle milk for up to another seven months. After weaning, it stays with its mother until it leaves to find its own home range when it is 18 to 24 months.

Southern hairy-nosed wombat females invest heavily in their young. Since the young of all marsupials are born very early in development and depend on their mother¡¯s milk to complete development, the mother spends a lot of energy producing milk over a long period of time. Additionally, once the young leave the pouch, they return sporadically for more milk while learning how to burrow and graze from their mothers. Wombats usually require two to three years with enough rainfall to successfully raise young.

They are plantigrade, walking on the soles of their feet. They have three distinct gaits, walk, trot and bound. They are extremely alert and can run up to 40 km/h for short distances.

Tunneling plays an important part in the wombat¡¯s ability to conserve moisture in their arid habitat. During the day they stay underground where the humidity is relatively high. They feed at night. Their effective digestive system takes moisture from the plants it eats. It takes eight days to totally digest what they consume. Their faeces are the driest of any mammal. Activity shifts to early morning in the summer and early evening in the winter.

Incisors, premolars and molars grow continuously. Hairy-nosed wombats eat a coarser diet than that of the common wombat (Vombatus ursinus), and as a result they need to masticate their food more thoroughly than that species, so their temporalis muscle is better developed and the masseteric muscle is more reduced.

They use their forepaws when excavating and their incisor teeth to remove obstacles. Debris is pushed back using their hind limbs. The pouch faces backwards to avoid being filled with dirt while digging. They can reverse all the way out kicking the soil backwards and can turn in a burrow using a barrel roll motion.

The current trend towards a dryer climate in arid southern Australia could be a serious threat. They breed once yearly, if optimal rainfall conditions prevail. Since the breeding of Lasiorhinus latifrons occurs in the summer, young wombats are weaned in the early spring, making them vulnerable to food stress and dependent on the amount of rain received in April. Without enough rainfall, there is not enough grass to sustain juveniles through their growth. Wombats born during a drought have little chance of survival. Additionally, overgrazing of the land can destroy perennial grasses in favor of annual grasses that do not meet the nutritional needs of juvenile wombats.

Their future in other parts of Australia is uncertain due to slaughter as hole-digging pests. They are also persecuted because they compete with sheep and cattle for food. Imported rabbits have also played a major role in the decline of the wombat.