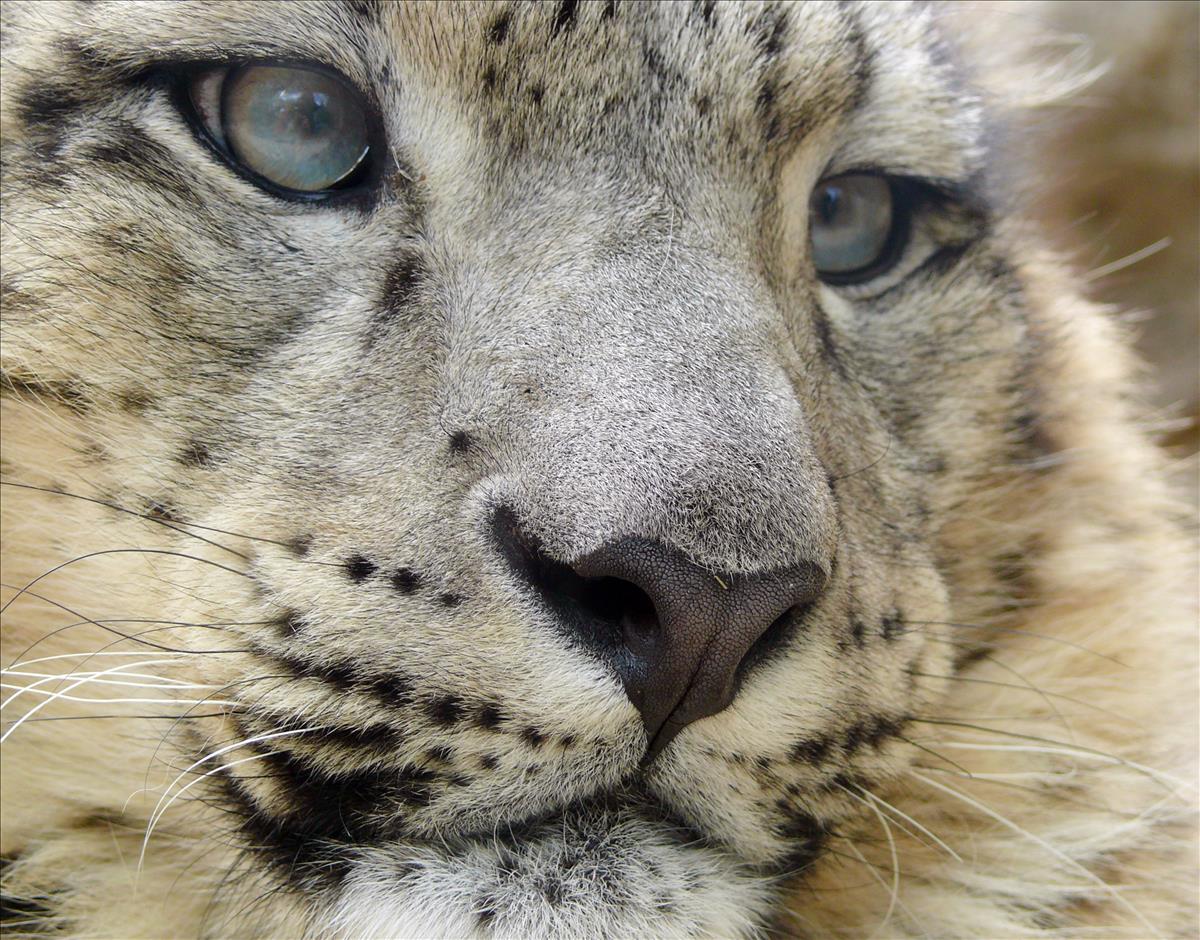 The snow leopard is a soft gray colour, shading to white on the belly. The head, neck, and lower limbs are marked with solid dark brown blotches or spots, and on the back, sides and tail the spots are large open rings or rosettes. The coat is long and thick, up to 12 cm in length. The head is relatively small and rounded. Forelimbs are shorter than the hind limbs. Paws are large and the bottoms are covered with fur. The most characteristic feature is the long, thick tail, which is almost the same length as the body. The tip of the tail is black dorsally and almost white ventrally.

Primarily in the Himalayan Mountains, from Myanmar moving west through China, Nepal, India, Pakistan and back east through Kazakstan, Mongolia and the Gobi Desert.

Found in areas of rocky wilderness, snow fields, glaciers, and alpine meadows on the edge of juniper and spruce forests. They live in mountain steppes and coniferous forest scrub at altitudes ranging from 900 to 6000 metres. They are known to migrate seasonally from higher to lower zones (summer to winter). In the summer they frequent alpine meadows and rocky areas, and in the winter they may follow prey into forests below 1800 metres.

Snow leopards are reclusive except during the breeding season. This runs from early January to mid-March, when long-drawn-out wailing calls can be heard echoing amongst the cliffs. This is when the female comes into oestrus and males and females need to find each other. Scent marking is very prominent during this mating season. When the male snow leopard locates the female, there is usually a prolonged courtship. Initially, the female resists the male's advances even though she acts provocatively towards him. Reassuring that their intentions towards each other are mutual is accomplished by increased amounts of visual and vocal communications and copulation occurs. Interaction may include hunting together.

After a gestation period of 90 - 103 days, the female gives birth to two to four cubs. Births occur between April and June. Cubs are born in a rocky shelter lined with the mother’s fur. The cubs weigh about 450 grams each at birth and are born with their eyes closed. They open their eyes after seven days and start to crawl within ten days, and can run by two months of age. They nurse for about three to four months, but eat their first solid food at two. They begin to follow their mother to hunt and will continue to do so during their first winter of life. They stay with her until they are nearly two years old. Snow leopards are fully-grown at about one and a half years, and reach sexual maturity at two years of age for females and at three years for males. Snow leopards live about 15 years in the wild, 19-20 years in captivity.

The snow leopard is a powerful, agile animal capable of making huge leaps, measuring as far as 15 metres. Short forelimbs and long hind limbs provide increased agility in the steep and rugged habitat and the long tail aids in balance when jumping from rock to rock. Snow leopards stalk their prey and usually spring from a distance of 6 to 15 m. They prefer to kill male ungulates because their large horns make them easy to unbalance when attacked from uphill. These cats eat slowly and remain by the kill for several days, protecting it from scavengers such as vultures or ravens until all meat is consumed.

Snow leopards are well adapted to living in the cold mountain temperatures. They have a very long outer fur coat and a shorter undercoat that helps them stay warm and dry in the cold. It has a long, very thick tail that may be curled around the face and body acting as a scarf in cold weather. Thick fur pads on the back legs above the ankle protect it against cold and ice. Large broad paws with furry bottoms act as snowshoes enabling the animal to walk on the snow without sinking. Small rounded ears and head reduce heat loss. A well-developed chest and enlarged nasal cavity are adaptations to the cold thin air of their high altitude home. Hearing and vision are well developed. They can endure a temperature range of - 40oC to 40oC.

The snow leopard is a solitary creature, only pairing during the breeding season or when females are accompanied by their young. Snow leopards occupy large territories, denning in rocky caverns and crevices. They can live on slopes of 30 degrees and sometimes steeper. Snow leopards are considered nocturnal, but seem to be most active in the early morning and late afternoon (crepuscular). They do not roar, but have several vocalizations, including a loud moaning associated with attracting a mate

The home ranges of males and females overlap extensively. Both the male and female will scent their territories. Scent marking patterns of the snow leopard include urine spraying, scraping with the hind feet, and head and neck rubbing. The areas scent marked serve as "road signs" to the snow leopards. The addition of sex hormonal products to the urine and body secretions brings about a change in their odour to tell the male that the female is ready to mate. The male snow leopard also increases his rate of urine spraying at this time. The male will expand his home range in search of females during the breeding season. The leopards test the urine marks of others by drawing the odor over the vomeronasal organ in the roof of the mouth. The facial expression caused by this action is called "flehmen".

Snow leopards are hunted for their pelts; bones, and body parts are taken for use in traditional Asian medicine. They are threatened by the depletion of their natural prey base due to competition with livestock and from humans hunting wild mountain sheep and goats for trophies and food. Snow leopards are persecuted by herders who retaliate by trapping, poisoning, or shooting them. Snow leopards also suffer from the degradation, loss, and fragmentation of their habitat.