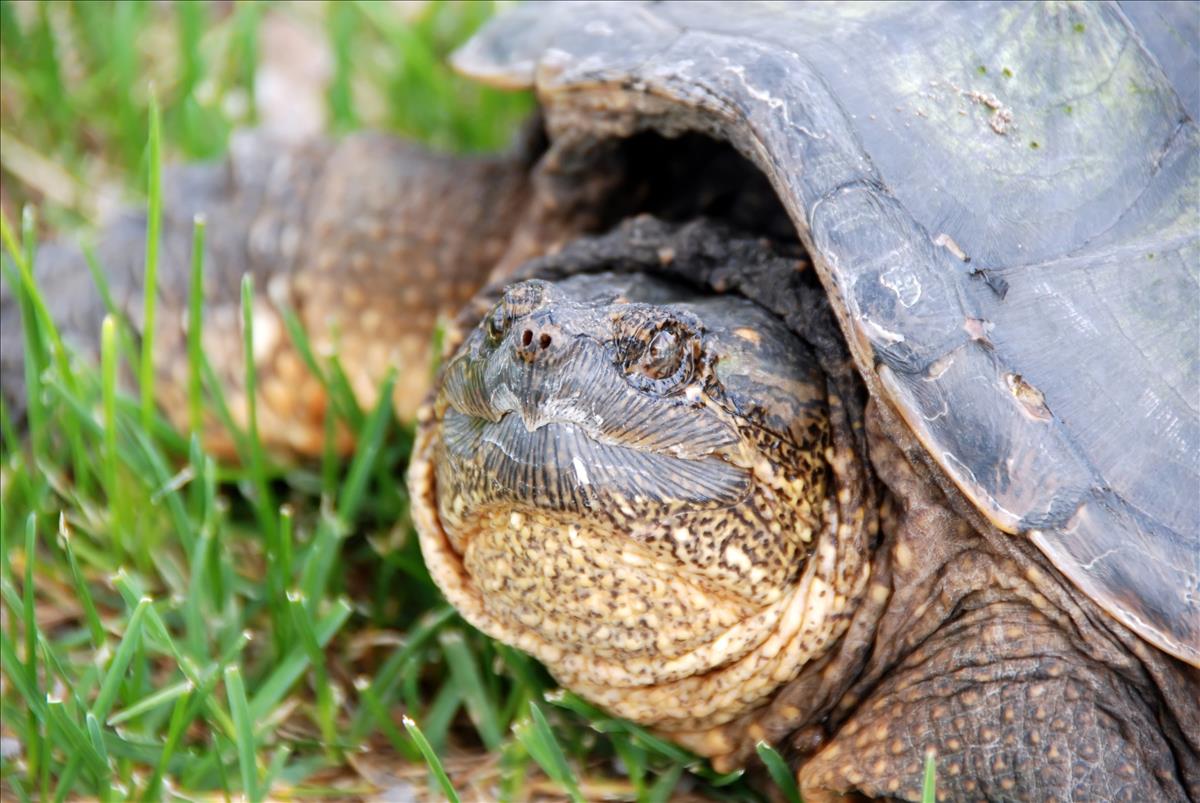 The snapping turtle has a rough carapace, markedly serrated at the rear edge. Young turtles have three longitudinal keels, with a rougher, more sculptured shell. Adult turtles have an almost smooth carapace that increases with age. Older individuals are usually covered with algae and easily mistaken for underwater rocks. The carapace colour ranges from light brown to almost black. The plastron is yellowish. It is almost cross-shaped and very small, leaving much of their underparts unprotected as they are unable to tuck their heads and legs back into their shell to avoid predators. The head, limbs and tail are brown. The head is large, the snout short and both tips of the powerful jaws are sharply hooked. There are two barbels on its chin and the skin on its neck is rough and covered with rounded tubercles. Its tail is thick at the base, as long or longer than the carapace. It has very interesting “dinosaur-like” triangular scales projecting from the upperside of the tail. These give the tail a serrated appearance.

Length of carapace: up to 40 cm. Weight: up to 16 kg. Greater lengths and weights are on record.

From Nova Scotia, New Brunswick and southern Quebec, west to southeastern Alberta and southward east of the Rocky Mountains to southern Georgia and the Texas coast in the United States. It is found from sea level to altitudes over 2,000 m in North America.

They are opportunistic feeders, primarily carnivorous, eating fish, fowl, frogs, insects, crustaceans, and any other small animals that they can catch. It will also eat some vegetation, especially when young. Carrion is often consumed. Small prey is swallowed whole but larger food is held in the mouth and torn apart with its long foreclaws. Feeding usually occurs underwater but may occur on land. They play a beneficial role in cleaning lake bottoms by consuming anything edible.

After hibernating throughout the winter these turtles become active in the spring. Breeding occurs from April onwards, varying with location. Females derive the energy needed for egg formation from the body fat they accumulated the previous year. In the mating process, the male positions himself on top of the female's shell by grasping the shell with his claws. He then curves his tail until his vent contacts the female's vent. Fertilization takes place at this time. Females begin to search for suitable nesting sites, preferring well-drained soils. The nesting period is from May or earlier in the south to mid-June or later in the north. After the eggs have developed sufficiently in the female, she excavates a hole, normally in sandy soil, using her hind feet. She usually lays 20 to 40 eggs. Clutch sizes can be larger. She again uses her hind feet to pack down the soil to fill in the nest and cover her eggs. Interestingly, female snapping turtles sometimes store sperm for several years. Sperm storage allows individuals to fertilize her eggs at any time of the year and it also allows females to lay eggs every season without needing to mate.

The white eggs are round with a fairly hard, brittle shell, 23-33 mm in diameter and 5-15 g in weight. They look somewhat like ping pong balls. Incubation is anywhere from 55 to 125 days, with between 75 and 95 being the most common. During this period the temperature of the incubating eggs determines the sex of the hatching turtles. Hatching turtles have an “egg tooth” located on the snout which helps in slitting open the eggshell. It falls off within a few days of hatching. Hatchlings are on their own, no parental care is provided. Growth is continuous, more rapid in young turtles, slowing down when they reach maturity. Should they reach adulthood the life span can be between 75 and 100 years.

The snapping turtle is one of the more aquatic species of turtle, spending most of its time lying on the bottom or buried in the mud in shallow water, with only its eyes and nostrils exposed. When moving in the water, it usually prefers to walk along the bottom or float slowly just beneath the water surface. If encountered on land and taken by surprise, it reacts aggressively by rising up on its legs and rocking back and forth while hissing with its mouth open. It will lunge forward and snap the jaws as a warning. Hence the name of snapping turtle. Attack is its method of defense when out of water. In water they do not bite but will swim rapidly away from danger, diving to the bottom where it will remain until it feels safe.

Most enter hibernation by late October, burrowing into the mud or occupying muskrat lodges or burrows. They become active again in March in the south, and as late as May in Canada.

The eggs and hatchlings of snapping turtles are eaten by many animals such as other large turtles, great blue herons, crows, raccoons, skunks, foxes, bullfrogs, water snakes, and large predatory fish, such as largemouth bass. As turtles become larger they are less vulnerable to predation.

Mankind poses a serious threat; killing them both for food and due to misguided beliefs that they attack swimmers and prey on game fish and the duck population. Many are killed on roads, which has a significant impact on females searching for nest sites and the likelihood of a turtle reaching its most reproductive years in old age.

In addition, snapping turtles are used by many people in turtle stews and soups. Turtle shells have been used in many ceremonies among the aboriginal people of North America. The shells were dried and mounted on handles, with corn kernels inside for use as rattles.