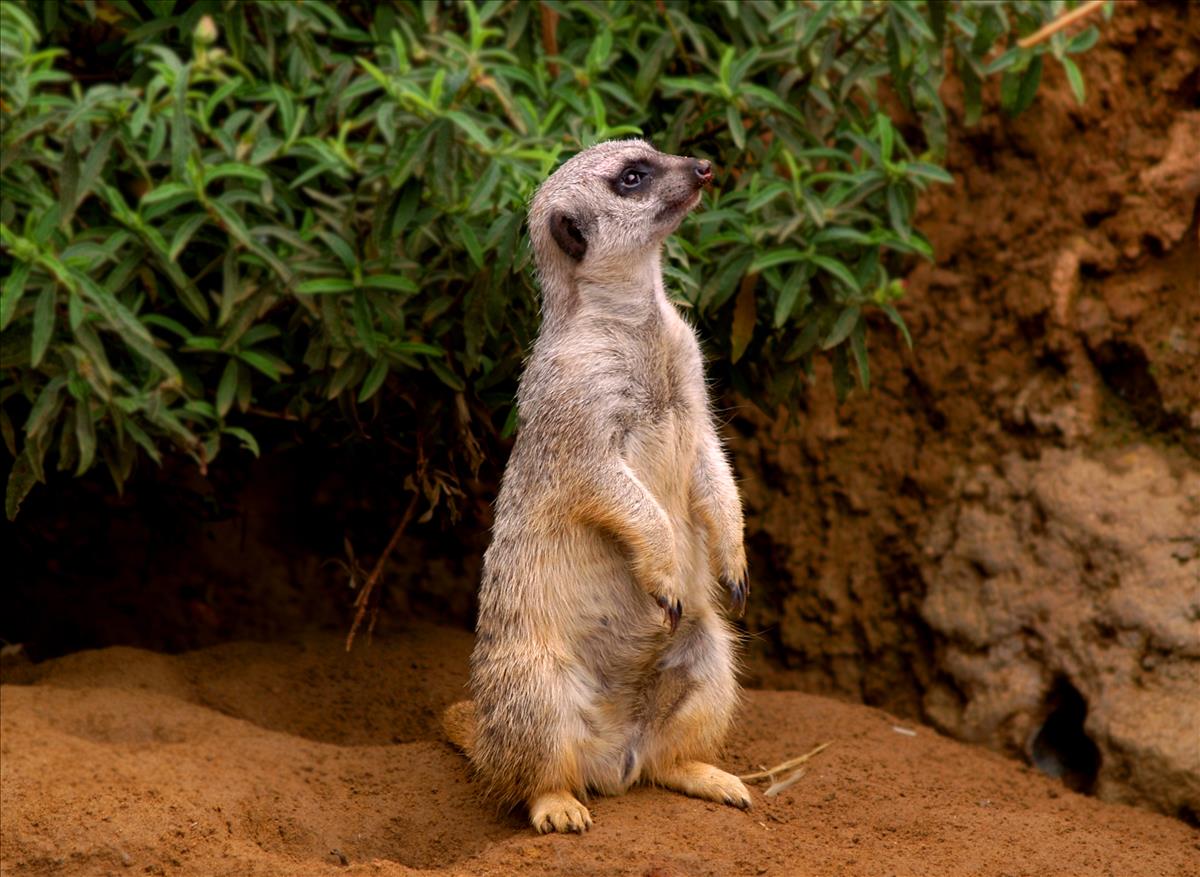 Meerkats, a type of mongoose, have long slender bodies, short legs and pointed muzzles. The coat is mainly grayish-brown to light gray in colour, marked with dark transverse bands across the rear portion of the back. The fur on the underside is lighter in colour. The head is almost white, the small ears and nose are black, and a dark patch encircles the eyes. The tail is thin, long and the end is tipped black. There are four digits on each foot with very sharp non-retractile claws which are curved. The claws on the forefeet are long and powerful.

They live in the southern part of Africa which is dominated by the Kalahari Desert. The Kalahari spreads over the countries of South Africa, Namibia, Angola, Botswana, and Zimbabwe.

Meerkats inhabit the most open and arid country of any mongoose species. They occupy open country, savanna, and bush.

Meerkats are highly social and live in packs consisting of familial groups. There can be 30 to 40 individuals in a pack. Each individual family group includes a breeding pair and their offspring. Mating is reserved for the dominant alpha male and alpha female in a meerkat gang. They can breed every two months, but tend to successfully breed two to three times a year depending on food availability. The gestational period is 70 - 77 days resulting in a litter of usually two to five pups. The babies are born with sparse fur and closed eyes. Eyes begin to open after 10 - 14 days. The adult coat does not develop for at least two months. For the first two weeks the young stay in the sleeping chamber fed only by their mother’s milk. The babies begin to venture outside, staying near the burrow system by the third week. From weeks four to six the pups will forage with their elders getting nourishment from both milk and insects. Pups are weaned at seven to nine weeks and at this time begin to find food on their own. They reach sexual maturity at 10 - 11 months at which time they may leave their familial group in search for breeding opportunities or to form new or join other groups. They may stay with their original group for up to three years before venturing out.

They are extremely social animals, fond of mutual grooming as well as wrestling and playing with one another. The whole group takes an interest in protecting the young. Some skills are instinctual while others are taught to the pups by the elders who act as mentors. Mentors take on the responsibility of teaching the pups the necessary skills for foraging for food as well as responding to danger. They live up to 10 years in the wild and 15 years in captivity.

Meerkats are diurnal, hunting during the day and living at night in their burrows. These underground burrows consist of entrance holes, tunnels, and sleeping chambers. There may be up to 70 different entrances to the burrow system. Individuals generally forage near the burrow, turning over stones and rooting in crevices. Their claws serve both as burrowing tools and for capturing prey. They have the ability to close their ears so as to keep dirt out while they burrow. They remove sand from their eyes by blinking. A white membrane called the nictitating membrane, located between the eye and eyelid, acts as a windshield wiper, removing sand from their eyes with every blink. They have binocular vision, a large peripheral range, depth perception, and eyes on the front of their faces.

They constantly communicate with one another in three different ways: scent, sound, and body language. Over 20 different sounds have been recorded all of which have different meanings. These calls can be broken down into six different groups: lost calls, alarm calls, leading the group calls, pup feeding calls, guarding calls, and foraging calls. They identify one another by smell more so than sight, hence they are constantly marking one another. They frequently communicate with each other while they are foraging for food. A meerkat will act as a sentry, watching for danger as the others look for food. If trouble arises, the sentinel barks a warning and the whole colony runs for cover into the burrow. The dark tip on the end of the tail helps to keep the group together. They forage for food with their tails in an upright position enabling them to easily identify their fellow group members. The markings on their backs are unique and no two are the same.

Meerkats have good hearing and sense of smell. The colour of their coats helps the meerkat to camouflage in their habitat. The dark band around their eyes serves to reduce any glare from the sun. As a result, meerkats have the ability to see a predatory bird as they look directly into the sun. Their stomach acts as a sort of solar panel during the winter months. The belly fur is thin and underneath is a patch of dark skin, which collects heat from the winter sun, helping the meerkat to regulate its body temperature. It will sit up on its back haunches to sun itself or lie on warm ground to increase its temperature. To reduce its body temperature, the meerkat lies belly down in a cool, dark burrow.

Jackals, wild cats, eagles, and hawks are natural predators. They are considered crop pests and carriers of domestic animal disease. Densities can fluctuate greatly across the range, and are influenced by rainfall and predation.