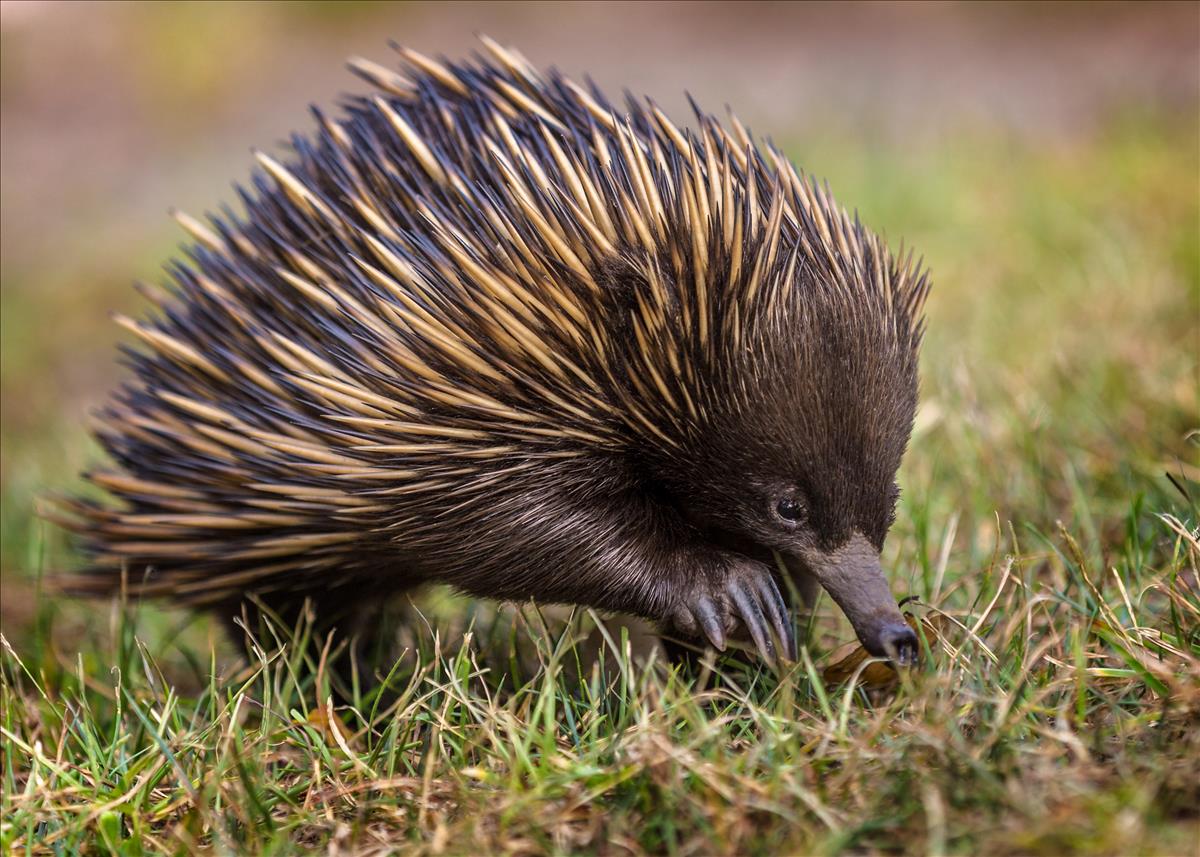 The short-beaked echidna’s cream coloured spines are one of its most distinguishing characteristics. These spines cover the entire dorsal surface, including a small tail. The spines are unusually large (up to 60 cm), hollow, thin walled and cover most of the body. These spines are in fact modified hairs. Insulation is provided by fur between the spines, which ranges in colour from honey to a dark reddish-brown and even black. The under part lacks spines, but is covered with fur and stiff bristles. The long snout is about half the length of the head. The head seems to be set directly on its squat body. No outer ears show, but two bright eyes can be seen at the base of the slender, naked, sensitive muzzle. The mouth is very small and opens only enough for a worm-like sticky tongue to flick in and out. The tongue is 15 - 18 cm long. The jaws have no teeth.

Echidnas’ intestines, bladder and reproductive organs all open into a common chamber; the cloaca, an external opening. Both males and females have a cloaca through which feces, urine, and in females, eggs pass. Males have non-venomous spurs on the ankles of their hind legs. Length of head and body: 350 - 530 mm. Length of tail: 90 mm. Weight: 2.5 - 7 kg.

The diet of echidnas is largely made up of ants and termites, although, they will eat other invertebrates especially grubs, larvae, and worms. The strong forepaws are used to open up the ant or termite nest and the echidna then probes the nest with its sensitive snout. Any insects in the nest are caught on the echidnas rapidly moving 15 cm tongue, hence the name Tachyglossus meaning 'fast tongue', which is covered with a layer of sticky mucous. The jaws are narrow and have no teeth so food is crushed between hard pads, which lie in the roof of the mouth and on the back of the tongue. Large grubs are squashed and the contents licked up. Echidnas eat a lot of soil and ant-nest material when feeding; this makes up the bulk of droppings.

In the breeding season, June to early September, the female develops a crescentic fold of skin which forms a pocket on the abdomen. Males have penises that they extend through the cloaca during mating. The female lays one egg (rarely two or three) curling into a tight ball and depositing the egg directly into the pouch. An egg is produced about 22 to 24 days after copulation.

The incubation period in the pouch lasts about 10 days. The egg is cream-coloured and has a soft leathery shell. It ranges in size from 13 - 17 mm in diameter – about the size of a grape. The egg is loose in the pouch and is retained by the apposition of the lips of the pouch. Upon hatching, the echidna is about 15 mm long, weighs about 0.38 grams and is translucent. The baby echidna sucks milk from the areola, which is one of two areas of skin in the anterior part of the pouch that the mammary glands open onto, instead of nipples. Young remain in the pouch for 45 to 55 days. At the end of this time, the young echidna starts to develop spines and is ejected from the pouch. The mother then places the youngster in a burrow she has dug specifically for this purpose. The entrance to the burrow is kept plugged and the mother replaces this plug when leaving and re-entering the burrow. Young are weaned at around 200 days old. Age of sexual maturity for both males and females is not known.

Short-beaked echidnas possess several adaptations to their foraging habits including tubular snouts, long sticky tongues, and front paws for digging. When disturbed, they dig straight down at great speed and cover themselves with earth. When they wedge themselves into a crevice they withdraw their appendages and erect their spines. It is almost impossible to dislodge them. They can run and climb, but walk with a waddle. They are extremely powerful and use their claws to tear apart rotten logs in search of termites or dig into ant nests.

They are mainly nocturnal, but in temperate parts of eastern Australia they are active both night and day. They can control their temperature to some extent, but it is usually lower than that of other mammals. In cold weather they go into a state of hibernation for a period of ten days. During this time, all body processes slow down. An animal of four kilograms or under will not hibernate.

Food is crushed between hard spines on the tongue and the roof of the mouth. The stomach has no glands and the inner surface of the stomach is lined with cornified epithelium. It has been suggested that the break down of the food is assisted by the grinding action of ingested dirt.

Short-beaked echidnas, and other monotremes, have low metabolic rates and low body temperatures, which may be related to such factors as diet and environmental variation. Short-beaked echidnas have larger brains than would be expected for their body mass. The cerebral cortex, in particular, is large and highly convoluted.

Man is their only enemy. They are wholly protected by law in Australia.